01. the Slovakia and Hungary plan 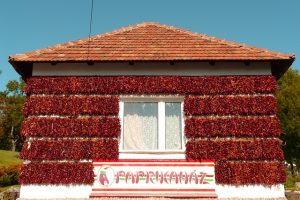 I suspect paprikas will form an important part of our diet, in the next five weeks or so…..

When we said to each other some time ago that we would leave traveling through Europe for the time we are getting old, we hadn’t expected that that time would arrive so soon. But with the world still in the grip of the Corona pandemic, making long distance adventure travel not only complex, but also a little too adventurous, we are necessarily focusing on European destinations. Not that there is anything wrong with that: we did enjoy our month-long exploration of the Northern half of Italy last year, and we equally liked the trip to the Czech Republic.

This year’s target is a continuation of the latter journey, and will take in Slovakia and Hungary, not only geographically, but also historically in the heart of Europe. We’ll drive to Bratislava, from where we slowly move eastwards, through picturesque villages and the Tata Ranges – Slovakia’s preeminent mountains -, to the old towns of Levoca and Kosice. From here we cross into Hungary to the famous wine area of Tokaj, which is also the base for exploring the villages in the Zemplin Hills and the Erdohat, towards the Ukrainian border. From where we make our way back again, westwards via the puszta – the Hungarian Great Plains – to Budapest and, in a convoluted way, to Vienna. I know, that’s Austria, but so close…

Five weeks, is the plan. Enjoying nature and culture. Recurring themes will be the castles, the churches – from large basilicas to small wooden ones -, and the old cobbled town centres: unlike the Medieval Czech towns the ones in Slovakia and Hungary will be of later, Baroque date. After all, they have suffered much destruction, not just from several Word Wars, but also at the hands of the Ottoman occupation force in the 16th and 17th Century – Hungary may be Central Europe now, but in those days it was the frontier, in permanent stage of war with the Turks to the east.

Habsburg rule, and the Austro-Hungarian empire, has left the area with some fabulous, opulent palaces. Favourable geology has created the conditions for warm water spas and bathhouses, unmatched anywhere else in the world. And climate appears to support a wide variety of grapes, of which a wide variety of wines are being made. Which may need to be tested. And which may need to be used to wash away the food, in which we have somewhat less confidence.

As always, watch this space!

One Response to 01. the Slovakia and Hungary plan