01. the Slovakia and Hungary plan 03. Passau

02. a bit of Central European history 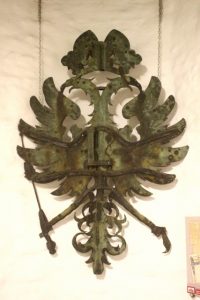 a shield with the double-headed eagle, originally mark of the Holy German empire, then confiscated by the Habsburgs with dynastic control over the empire, and lastly the symbol of the Austro-Hungarian dual-monarchy

Books have been written about this subject, full of details, and full of scholarly debate; not everybody agrees on each and every element of this complex issue. Below a short recap of the most important, eye catching episodes in Central European history, without any claims to be correct neither complete. Just so we know what we are going to look at, in the next five weeks.

My generation doesn’t know better than that the Czechs and the Slovaks were united in Czechoslovakia, but in fact this has been the exception, rather than the rule, in the history of the region. The first time they were joined was at the end of the 8th Century, when they were both part of the Great Moravian Empire (which also included parts of Poland and Hungary). But that unity ended a hundred years later, with the Magyar invasion – indeed, the proto-Hungarians coming in the picture – in 896 AD. From that moment onwards, and for the next, say, 1000 years, the Czechs were always more German-oriented, and the Slovaks Hungarian-oriented. No wonder there are significant cultural and social differences between the two peoples. 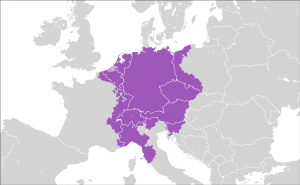 the Holy Roman Empire around 1600 – without Slovakia and Hungary

The Czechs went their way, first Bohemia as a vasal state of the Holy Roman Empire – mostly Germans, indeed -, and later as an independent country, led by the Premyslid dynasty, which only ended at the beginning of the 14th Century. Prosaically, with first the death of Vaclav II from ‘consumption and excess’, and a year later with the murder of his teenage son, who had no offspring yet. His four sisters, well, they were women, and thus excluded from the throne. They then got the House of Luxembourg to come to their rescue, which was a smart move, because the second Luxembourger to lead the country, Charles IV, next to being King of Bohemia was also elected Holy Roman Emperor (the emperor was, in those days, elected by an electoral collage of princes and high-ranking noblemen). This established Prague, the Emperor’s favourite city, as the cultural capital of Central Europe, at least for a while.

Unity was not to last. Charles’ son Vaclav IV reigned during a time of increasing religious fracturing, all over Europe. Schism in Rome, but also in Bohemia, where the preacher Jan Hus, a man of the peasants as opposed to the elite, protested against the corruption in the church, and especially the religious indulgencies. Hus’ capture and subsequent execution – burning on the stake, no less – by the authorities made him a widely admired martyr, and led to the Hussite wars, inaugurated by what has become known as the first Prague defenestration: several Catholic councillors being thrown out of the window of Prague’s town hall. Note ‘first’ here, indicating that this was going to be repeated at least once more.

The various factions in the Hussite wars, like conservatists, religious reformers and wholesale reformers, reached a kind of a compromise again in 1634. First, an elected local regent assumed power, on his death a Polish dynasty took over, and in 1526 Ferdinand I, the then Holy Roman Emperor, was crowned King of Bohemia, so establishing Habsburg rule over what is now the Czech Republic.

Not that this augured peace and stability. The Catholic Habsburgs were increasingly at odds with Bohemia’s predominant Protestant nobility, and when a few Catholic nobles were thrown out of the window of Prague’s castle in 1618 – there he is, the second Prague defenestration! -, this started the Thirty Year’s War, involving local Protestant nobility, and support from Protestant Saxons and the staunchest defenders of Protestantism, the Swedes, together fighting the ultimately victorious Catholics. After the final battle in 1648 the Swedes went home, the Bohemian nobility was dismantled, witches were burnt, and Czech identity reduced to the peasantry. The focus of the Habsburgs shifted decisively from Prague to Vienna.

The Slovaks, on the other hand, became part of Hungary after the collapse of the Moravian Empire in 896 AD, and stayed that way until the end of WW I. Which means that Slovakia, essentially known as Upper Hungary at that time, largely shared Hungary’s history, apart from a few short periods of semi-independence linked to strong-willed individuals.

Hungary first enters history as part of the Roman empire, around the middle of the first Century. But the Romans had long left when Magyar tribes, under the command of Arpad, invaded from the east and gradually expanding their land-grab. They settled in what is now Hungary, built ties with Bavaria and sought recognition from the Catholic church. Which led to King Istvan, great-great-grandson of Arpad, being crowned a Christian King in 1000 AD. That’s how you join the establishment.

Except that not everybody respected the establishment: the Mongols invaded in 1241 and sacked large parts of Hungary, which also decimated the population, if not at the hand of the Mongols then due to following famine and plague. Soon afterwards, the Arpad dynasty died out. But the establishment restored itself again: several foreign royals succeeded each other, perhaps attracted by the rich gold mines that had been discovered in the region. Which also facilitated a lot of German and Slovak immigration in what then were largely empty lands. When the last of the foreigners, Sigismund of Luxembourg – also King of Bohemia and the one who betrayed Jan Hus: it is a small world -, died in 1447, the Ottomans were just about to invade. Thanks to a local Transylvanian warlord, Janos Hunyadi, they were defeated, which brought Hunyadi the title of Prince of Transylvania, and his son Matyas Corvinus, ultimately, the Hungarian throne.

Matyas did well, not in the least by establishing a large standing army paid for by the nobility, which kept the Ottomans at bay. Except that he didn’t produce a legitimate heir, so on his death in 1490 the nobles elected a more pliable king, one that would reduce their taxes, and allow them to further squeeze the peasantry. With the predictable effect of a peasant revolt, and a further withering of the standing army because of limited funds. Which opened the door for the Ottomans to invade once more, this time much more successfully. In the Battle of Mohacs of 1526 the Hungarian army was completely wiped out, including its royals, its noblemen and its commanders.

The Turks reached Buda – one half of present-day Budapest – and so occupied about half of what is currently Hungary. The western-most part of the country, including Upper-Hungary – Slovakia – got a new king, the self-appointed Ferdinand of Habsburg, who needed a buffer between the Ottoman forces and Vienna, his capital and the ultimate Ottoman target. Suddenly, Central Europe had become the eastern frontier of Europe. And a restless frontier is was, for a few hundred more years. The Ottomans had a different approach to war; they would shamelessly exploit the peasants, and carry off villagers and townsfolk as slaves to Constantinople. It took until 1699 until they were finally beaten back, by a multi-national European army. The opportunity for the Habsburgs, of course, to expand their Catholic rule over the rest of mostly Protestant Hungary, too. The Hungarian War of Independence, a misnomer, from 1703-1711, was to no avail, lost against a militarily superior Habsburg. 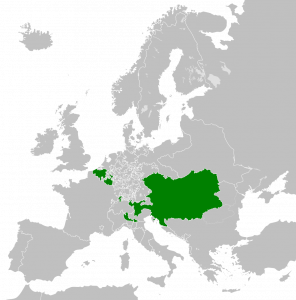 the extend of the Habsburg hereditery lands at the end of the 18th Century, after Ottoman withdrawal

Hungary was left a country with a small, but rich land-owning aristocracy served by a serf-like peasant population. Deserted after years of war, a policy of immigration created room for people from surrounding countries, of which Germans were the most successful, helped by the Habsburg to dominate education and culture. The Magyars became a minority in their own country. Yet, nationalism proved strong enough, and with attitudes in Europe changing, and the House of Habsburg weakening, Hungary declared independence in 1848. Only to be crushed again a year later, when the Russian tsar sent his armies in support of the Habsburgs. However the genie was out of the bottle, and increasing integration of Austrian and Hungarian economies ultimately led to the Dual Monarchy, henceforth known as the Austro-Hungarian Empire, in 1867. The small compromise for Hungary, of having to adhere to diplomatic treaties that Austria had made – like the one with Germany –, seemed small beer at the time, compared to the country gaining status and prosperity. Besides, and to the chagrin of the Slovaks, Hungary now assumed rule over Slovakia again, which since Habsburg takeover in 1526 had been directly ruled from Vienna. Suddenly, Slovaks were exposed to Hungarian nationalism, Hungarian language, and no participation at all in matters of state. Many voted with their feet, and emigrated.

In 1914 Austria declared war on Serbia. Germany joined in, and treaty-bound Hungary had no other option than to become part of the Axis, too. With disastrous results, and defeat in 1918. On the embers of the Habsburg Empire grew a number of successor states, the most surprising one being Czechoslovakia, by mutual consent of Czechs and Slovaks. Already during the war they had great difficulty with the idea that they had to fight together with their old enemies, the Habsburg Austrians and the Hungarians, against their ethnic brethren, the Russian and Serb Slavs. Never mind that the borders were pretty messy, with German-speaking parts of Bohemia and Moravia – the later Sudetenland – declaring themselves independent (to no avail), and including lots of Hungarians, whilst leaving out lots of Slovakians, stuck in rump-Hungary. I say rump-Hungary, because the country had not only lost Slovakia, but also the large region of Transylvania, which was given – some would say, returned – to Romania.

What was left of Hungary became, briefly, communist, at the hands of Bela Kun in 1919, and then a Kingdom again – without a King, but with a caretaker regent, Admiral Miklos Horthy. (Which prompted US president Roosevelt to ask: so Hungary is a Kingdom without a King, run by an Admiral without a navy?). Resentment over lost territory and an increasing shift to the nationalist right, accompanied by anti-Semitism, drove Hungary inevitably into the Axis-side of WW II, once again losing, and once again losing Transylvania (which, with Nazi-help, had been wrested from Romania for a while).

With the arrival of the Nazis, Czechoslovakia was split again, into an annexed Sudetenland, a German-led Protectorate of Bohemia and Moravia and an independent Slovakia; independent in name, because they equally quickly expelled Jews, and after a rebellion in 1944 were occupied by Nazi Germany, after all.

From there history is common-knowledge, I guess. The Russians won the war on the eastern side of Europe, installed their puppet-governments in once again joined Czechoslovakia and in Hungary – and to make sure, aggressively suppressed any attempts to liberalise away from Soviet control, in 1956 in Hungary and in 1968 in Czechoslovakia. But the Soviet Union, perhaps the last empire to control large swaths of Europe, also disintegrated and collapsed, and its vasal states became independent republics in the centre of Europe. One more, actually, in 1993, when the Czechs and the Slovaks amiably parted ways and Czechoslovakia split up in the Czech Republic and Slovakia. Like it has almost always been.

Anyhow, we start our trip by overnighting in Passau, in Southern Germany. 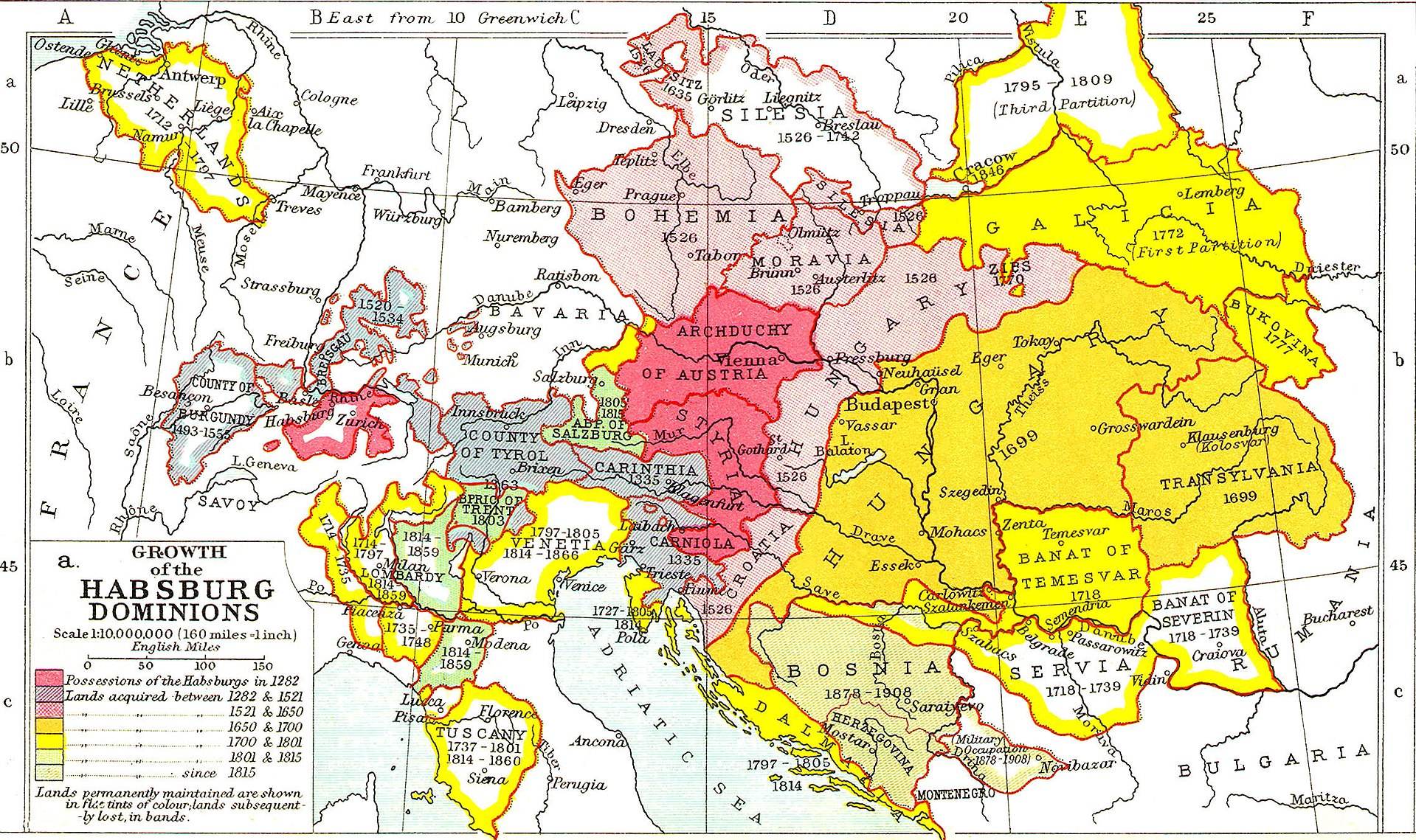 the growth of the Habsburg lands over time