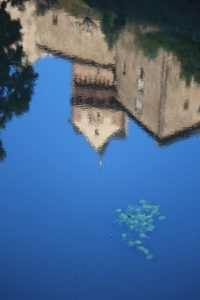 We base ourselves in the charming little Medieval town of Loket, to get acquainted with the Czech reality of pastel houses, cobbled streets and beer breweries, as well as monasteries and castles in the surroundings.

Loket is in the western-most tip of the Czech Republic, an easy less-than-a day’s drive from our hometown in The Netherlands. We arrive on a Sunday, late afternoon, beautiful weather, and teeming with tourists. Perhaps our gamble – the Europeans are going to stay at home this summer – doesn’t pay off, after all? But it turns out that it is a public holiday, and there is a free pop concert, for which the locals have turned up in masses. A day later everybody has gone again, and we are the only guests in the hotel. 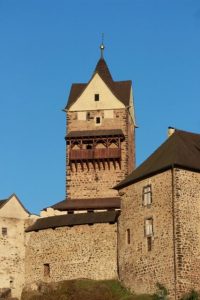 the tower itself, high above the water 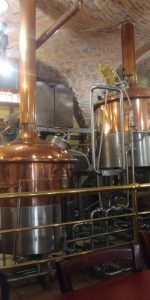 the local brewery of Loket

The small town of Loket is a gem. The old part is built on a tiny peninsula, around which the River Ohre bends sharply – the word ‘loket’ is Czech for elbow. All the elements of a Bohemian town are present, the town hall, the castle, and the central square with pastel-coloured houses. Our hotel is at the square, too, with a terrace in the sun. That’s it for today! Well, not exactly, the late evening sun invites taking pictures, for which we walk from one end of town to the other and back, but that is a five-minute affair. In the process we do discover other gems, though, like the local brewery – a little more than a five-minute affair -, that produces a dark beer with a distinct smoky taste. One more element of our expectations met. But the first cracks in our tourist-avoiding strategy are already appearing. No tourists, then the castle is – temporarily – closed. And we will find more places closed, in the coming weeks. 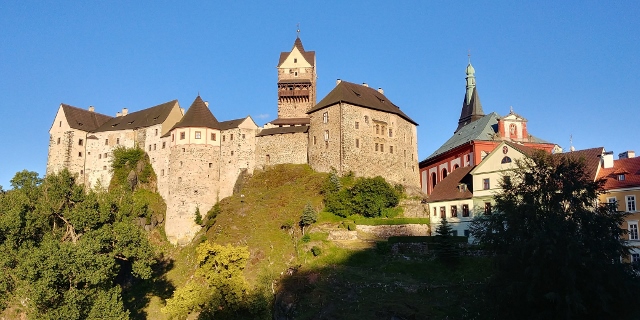 the townscape of Loket, dominated by the full size castle 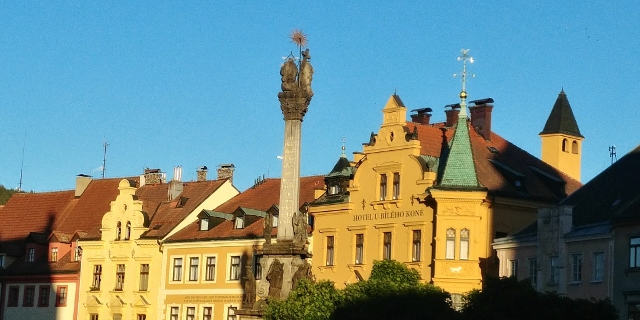 part of the town square, late in the afternoon 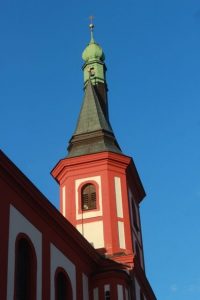 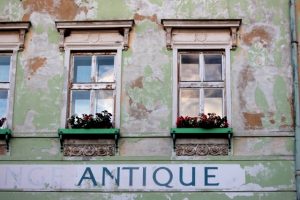 this describes most of Loket 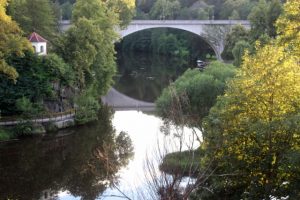 bridge over the Ohre 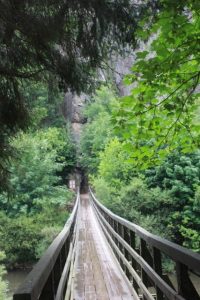 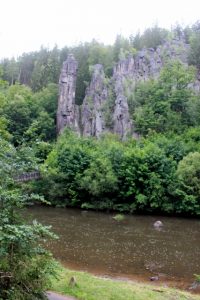 We use Loket as a base to explore the surroundings of West Bohemia. We cruise through the Slavkovsky Les nature area, characterised by forests of extraordinary tall pine trees, and lots of colourful flowers in the open fields. A little down river from Loket are the Svatosske Skaly, a couple of rocks, and a natural wonder if you believe the tourist guides we carry. In fact, they are tall, weathered granites, and in the miserable grey rain which is falling when we take our walk there, not very impressive. But it is nice to walk, and we don’t get too wet, after all. 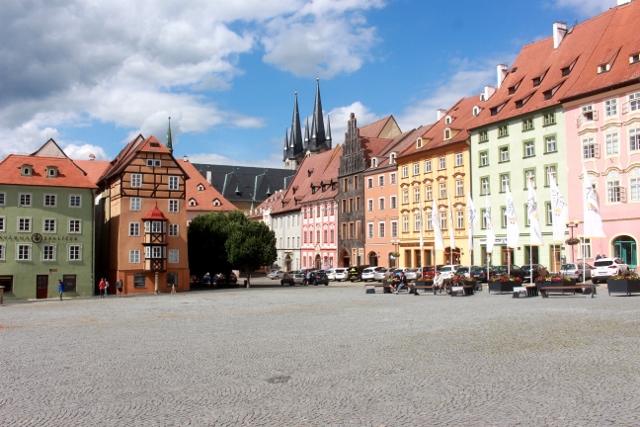 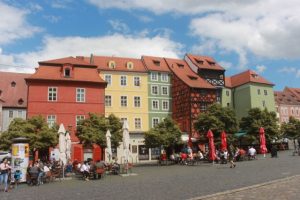 the ‘fachwerk’ houses of the Spalicek, or the Block 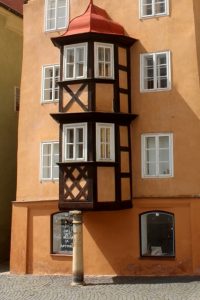 balcony in need of some support 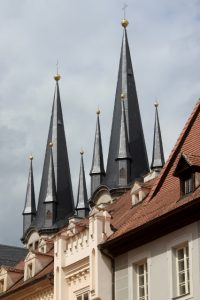 We backtrack to Cheb, closer to the German border, with its 13th Century Romanesque church that looks rather gothic to me, and with its Spalicek, which literally means The Block, and consists of a collection of eleven half-timbered ‘fachwerk’ houses remaining in the centre of town. Originally, there were more, but most didn’t survive the Communist urge for renewal and modernisation – although there is little sign of modernisation around the town square, which contains quite a number of other old buildings. 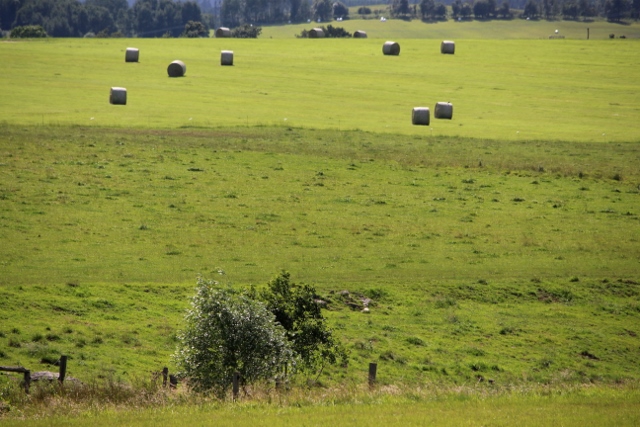 the hay harvest ready to be picked up 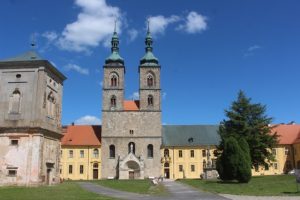 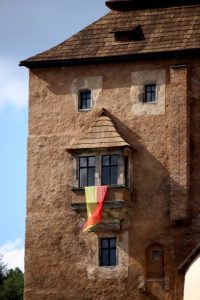 the older part of the castle in Becov nad Teplou 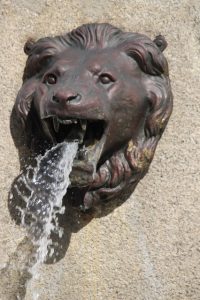 and water from the mouth of a lion, Becov nad Teplou

We also drive to Becov nad Teplou, to see the ‘zamek’, and enormous castle complex of Medieval, Renaissance and Baroque constructions – which is under reconstruction and thus only to be admired from the outside. And we get to Tepla, where there is a huge monastery, equally multi-period constructed since the 12th Century, and now once more being restored after the Communist used it as army barracks. Our main interest in the library inside, apparently with triple-decker bookshelves and wrought iron balconies. But the next tour is in one-and-a-half hours, in Czech language only, and no, we cannot just slip into the library unaccompanied. We admire the monastery from the outside. 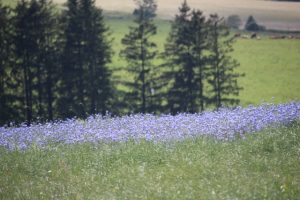 purple flowers in the fields 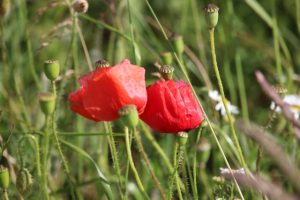 And we use Loket as base to visit some of the famous ‘Kur orts’, the health spa’s of fin-de siècle fame, late 19th and early 20th Century Karlsbad and Marienbad, now called by their proper Czech name Karlovy Vary and Marianske Lazne. But I write about them in a separate entry. 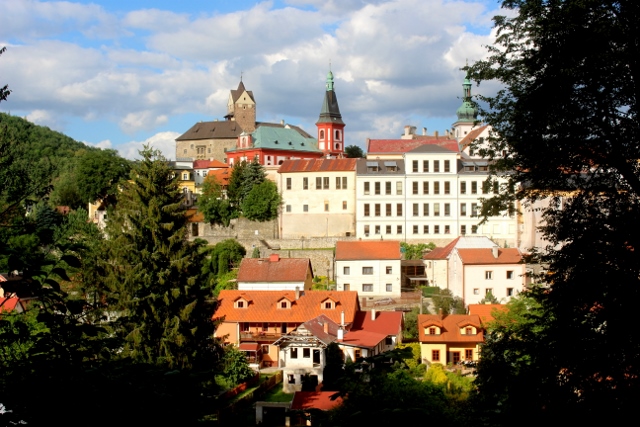 and a last view on Loket, from another angle

One Response to 02. Loket