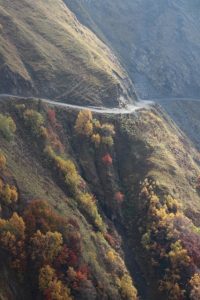 no doubt some of the roads in our itinerary will be looking like this!

It ‘ll be a bit of driving again, and the occasional public transport, to make our way through mountains and past beaches. A pretty varied program.

So pick up where we left, three years ago? Now, not exactly. Trying to avoid as much as possible the main airports, we will be flying from Dortmund to Kutaisi, Georgia’s second city, in the west of the country. From there we head into the mountains of Svaneti – some adventurous driving ahead! – before we turn back to the holiday beaches of the Black Sea, in August mostly populated by Russian tourists, I fear. On to Batumi and then inland, back into rough mountain roads, along the southern border with Turkey. Not to be missed: the Stalin museum in Gori, just before we end up in Tbilisi, Georgia’s capital city already known to us. 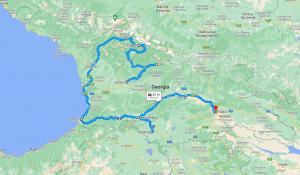 the Georgia plan, from Kutaisi to Tbilisi 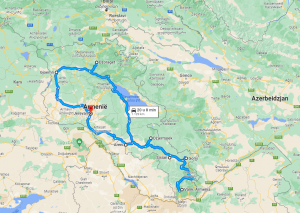 and in Armenia, from Yerevan through about the entire country, and back to Yerevan

Along the road, medieval defensive towers, cave cities, and the usual share of churches and monasteries, as well as – no doubt – unrestraint coastal holiday developments and – no doubt, too – the fascinating remnants of largely collapsed Soviet industries and cheap housing estates (the famous palatis, as regular readers will have encountered in my earlier Eastern European and Central Asian travelogues). Throw in some spectacular mountain scenery, a humble hike so here and there, a spa resort or two and the pebble beaches of the Black Sea, and it almost looks like a real holiday!

From Tbilisi we take a train – or a bus, or a taxi – to Yerevan, capital of Armenia, where we have a few days for the local sights: very dangerous, things like carpet and wood carving museums. And then we do the same as earlier in Georgia, rent a car and drive through the country, clock-wise this time. Circle Mount Aragats – not to be confused with Mount Ararat, Armenia’s most holy mountain, now located in Turkey -, from the town of Gyumri, rock hewn churches and spectacular canyon scenery, on the way to Dzoraget, more churches and monasteries again, and to the petroglyphs in Goris, if we make it that far. Do a few more walks and another spa. Oh, and I almost forgot, taste a few wines, too. Perhaps less famous than the Georgian variety, but Armenia apparently also has some excellent wine, which has to be sampled, of course.

I’ll be reporting on progress, on the merits of the various sites, as well as on those of the food and drink. And on the unexpected adjustments to the program, because of unanticipated occurrences and opportunities and changing interests along the way.

After all, this is going to be our usual traveling again! First stop: Kutaisi.