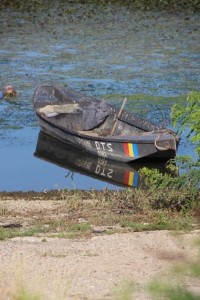 rowing boat on the Danube

Where the Danube forms the Serbian-Romanian border, the river flows through a number of gorges, which, predictably, have now been dammed.

Today was Danube Day. Not that one can do the entire Danube in a day, Europe’s longest river requires a little more time, but the part of the Danube that separates Romania from Serbia is quite easily traveled in a day or two. 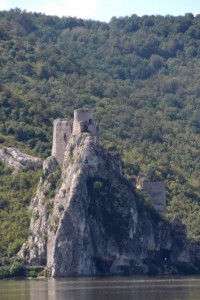 a castle at the Serbian side, at the beginning of one of the gorges 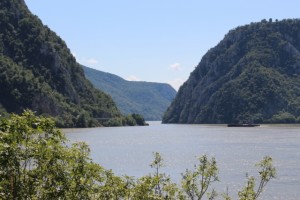 entry to another gorge, further downstream

We picked up the river in a village called Moldova Veche (close to, you guessed it, Moldova Noua – the Romanian language has definite similarities with other Latin languages, but more about that later). This is where the Iron Gates National Park starts, covering the river, and the area further uphill, on the Romanian side. “Iron Gates” refers to a series of steep gorges through which the river worms itself southwards through the Carpathian Mountains. For centuries, the Iron Gates made the river unnavigable because of the cataracts that precluded any ship from passing here, but at the end of the 19th Century the Hungarians managed to create a channel through use of explosives and physically removing a significant amount of mountains. Yet, strong currents kept playing havoc, so that ships traveling upriver could still only manage the gorges by being pulled by locomotive.

Patrick Leigh Fermor, an intrepid English traveler who walked (!!) from The Netherlands to Istanbul in the 1930s, describes the gorges, and the traces of Roman road along them, as well as the old town of Orsova, several villages at the valley bottom, and the Turkish-inhabited island Ada Kaleh. The joint Yugoslav-Romanian project that started in 1964 ended all that, and ultimately put two hydro-electric dams in place, with locks, one of which has, apparently, a vertical drop of 30 meters – but they do make the river navigable, for the first time. Everything has its price, I presume, including significant environmental impact, about which nobody was really concerned in those days. 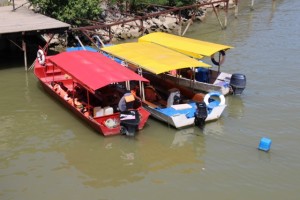 tourist facilities include boat trips through the gorges

The result today is that most of the Danube in between Serbia and Romania is a long-stretched lake, and its banks are hot property: many an ostentatious villa has been constructed on the Romanian side, with private beach, boat landing, high fence and alarm systems. So much for a National Park. 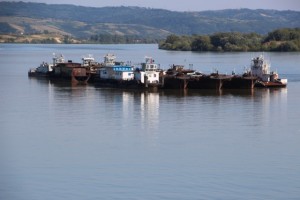 there is also normal traffic on the river, now that it is navigable thanks to the dams

In between, the villagers have expanded their traditional business by opening Pensiunes (little guesthouses, bed & breakfast places), often complete with restaurants and bars, some of them on jetties over the water, and others with small beaches inviting people to swim – which very few do. Around every corner, local tourists have occupied the prime fishing spots (fishing seems to be a second nature, here), and wherever one can park relatively close to the water, day trippers have put down parasols, small tents, tables and chairs, and are picnicking. In between the rubbish left by yesterday’s day trippers, of course. One of the striking habits of Romanians is that they look for the nicest, most pristine places to enjoy their day out, but subsequently have little consideration for how they leave the place behind. Heaps of bottles, plastic and glass, together with empty crisps bags, toilet paper, and other refuse mar the most idyllic spots, and every other spot, too. 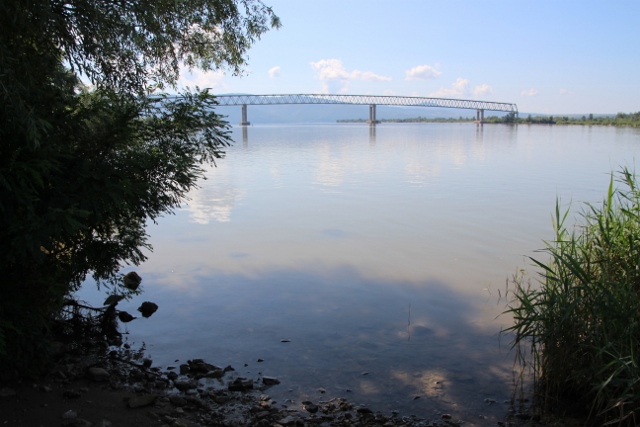 bridge across the Danube, to nowhere 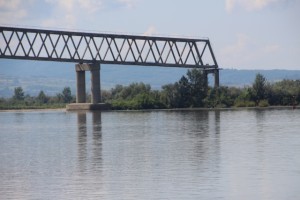 But the big picture of the Danube is nice enough, in places a wide stretch of water, in others narrower, where you get the feeling that you can almost touch the other side. In Moldova Veche that is literally the case: someone decided  to build a bridge across the river, but without access to the structure itself. Weird. An old fort on the Serbian side, and several derelict factories on the Romanian side are testimonies to the changing of times. When we finally reach the dam site – one of them -, it is suitably impressive, the huge power installations, the locks, and the dam itself, which also serves as border crossing into Serbia. The one thing that has not changed with time, is that one is strictly forbidden to take photographs – which would not have done justice anyhow to this mega project, better check Google Earth. 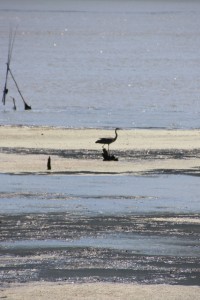 I don’t know what she wanted to sell me, but she had great fun

Further downriver the Danube quickly assumes its usual form as a broad expanse of water again. People still fish, and so do the herons. But, with faster flowing water, the banks here are a lot less attractive for day trippers and entrepreneurs. The land is returned to the occasional crop, sunflowers and corn, and to the sheep.

Next: Dobretu-Turnu Severin, along the Danube 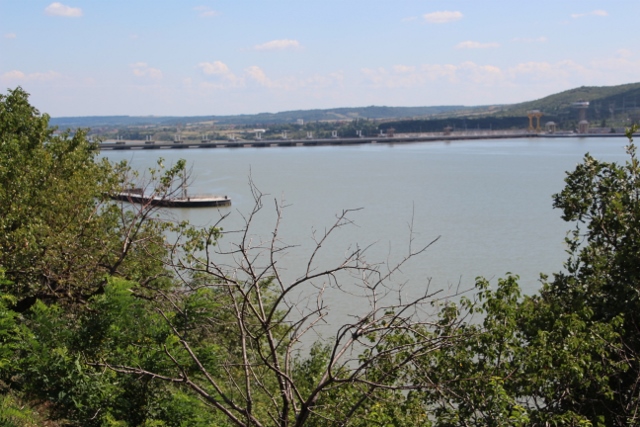 sneaky photo of one of the dams