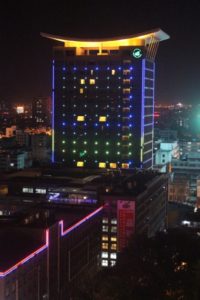 one of the modern office buildings in Baoshan

Modern, developed Baoshan still has its charms, hidden behind the avenues and in fringe neighbourhoods.

Baoshan is one of those Chinese cities that, well, is just like so many other Chinese cities, uniform, featureless, efficient. We had initially included it in our itinerary because apparently the centre still has many original wooden houses, but then dropped it for something else, only to reinstate it again to have a day’s rest between bus rides. And to treat ourselves to a nice and comfortable hotel. 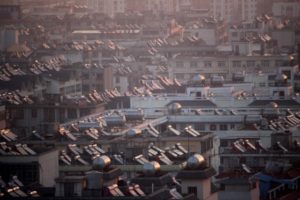 view from our hotel, roofs and water heaters lit by early morning sun

Our guidebook is 20 years old. Original wooden houses? There are no original wooden houses anymore in Baoshan. Instead, we are looking at a modern, developed city, wide avenues with expensive shops, a few malls, and a whole range of trendy coffee bars and fast food restaurants. And pharmacies, every few hundred meters, often from the same chain; these people seem to be obsessed with health, here. (There are also dentists and small health posts along the roads, where people are being treated, or laying in hospital beds, or sit waiting with a drip inserted, all in plain view, from the pavement – I decided against photos, if you don’t mind). 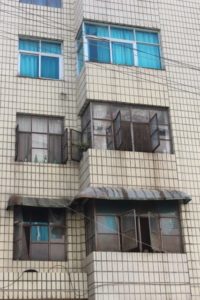 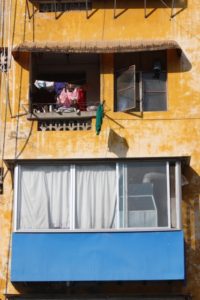 some with open, others with closed balconies 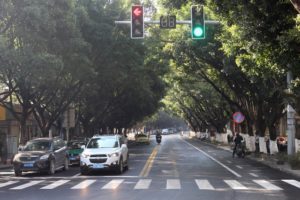 Yet, behind the broad avenues, and in between, along fairly attractive, tree-lined streets, we do find back the typical Chinese residential areas, the 4-5 story fantasy-less, and lift-less, apartment blocks (those who have followed some of my earlier travelogues know my fascination with these ‘palatis’ – the Albanian terminology). Tiled outside walls, balconies that have more often than not been enclosed to provide an extra room, and otherwise are being used for laundry drying, or just storage of less urgent household items. But, as we saw on our arrival a week ago, these, too, are disappearing, in favour of high rise modern apartments in the outskirts of town, still fantasy-less, but with a lift this time. 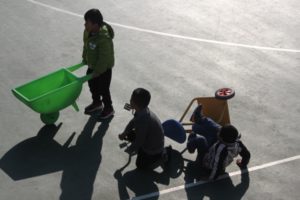 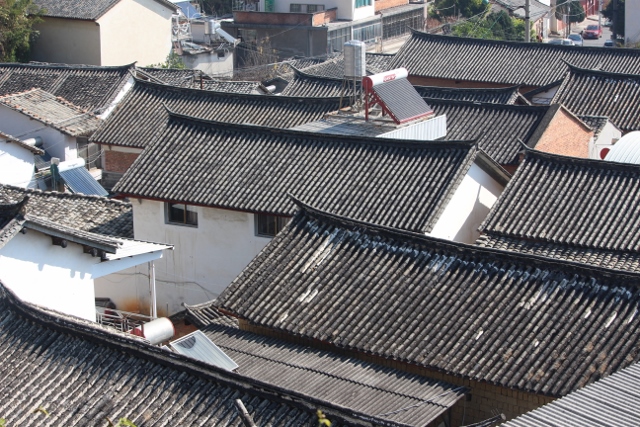 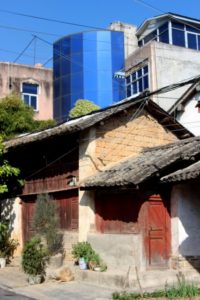 and look, there is one part-wooden house left! 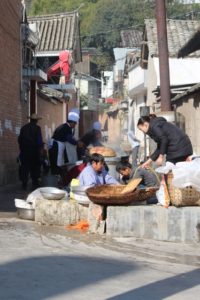 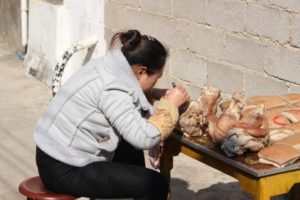 one woman painstakingly takes the hairs of a pig leg

North of the centre, at the edge of the Taibao Park, we do end up in a more authentic neighbourhood, with low white houses, grey roofs, narrow alleys in between. Several men and women are cooking a huge meal, and tables are being set up to provide for the whole neighbourhood:  it is the celebration of the third day after the birth of a baby – or perhaps the third month, that we didn’t manage to find out. About forty people enjoy the lunch; we kindly decline the offer of a plate of rice, not really knowing whether the offer is a genuine one or obligatory. The Chinese society has never struck me one easily sharing with outsiders. 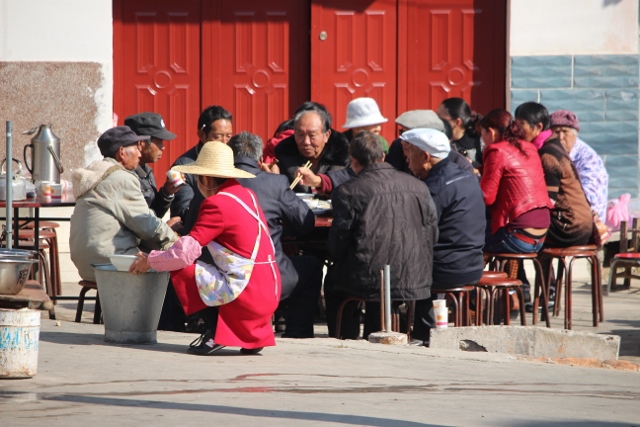 part of the neighbourhood enjoying the lunch 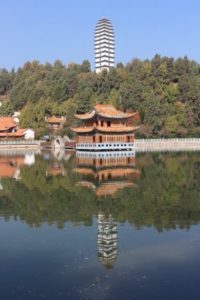 pagoda mirroring in the lake next to the park 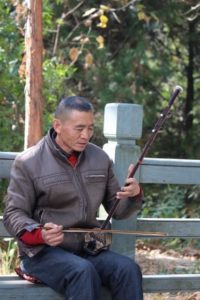 a man playing his Chinese cello, adding to the peaceful atmosphere 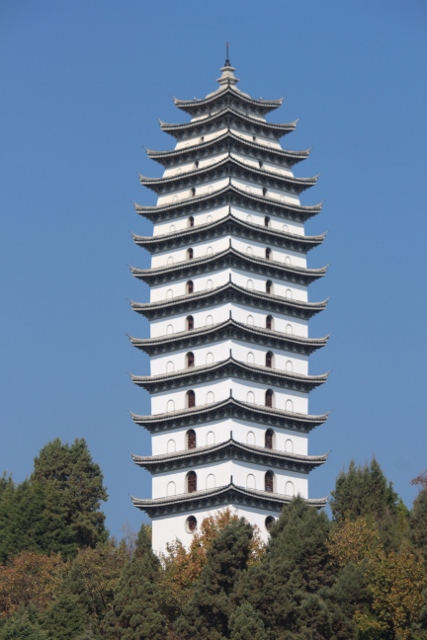 and the pagoda, in its full glory

Instead, we walk around the pond next to the park, then up to the pagoda that towers above everything. It is only here that we realize that we have been moving surrounded by noise since we left the hotel: traffic, construction work, and Jingle Bell’s in Chinese (here, too, Christmas is firmly established on the commercial agenda). At the base of the pagoda it is finally quiet; the man who starts playing his Chinese cello actually adds to the atmosphere.

The pagoda is closed, we cannot go up. Walking on through the park, past several other monuments and temples – all closed, too, many in scaffolding, work and noise in progress -, past brightly coloured exercise machines, we reflect a little on the new China, something we will no doubt do many more times in the coming days. A striking difference with the past: there are no bicycles in town, I mean, not a single bicycle, except perhaps a fancy youth on a mountain bike. Cars, yes, and for the rest everybody rides a scooter-like motorcycle. Many are electric, you don’t hear them coming, and you don’t smell them either. Another difference, subtler: cars actually slow down at pedestrian crossings, and allow relatively risk-free crossing of the street (I say ‘relatively’, because I don’t yet trust this blindly!). And one of those things that will never change: drivers, of cars and motorbikes alike, will still go for themselves, without any regard for efficient road use: me first, whatever happens.

If Baoshan is a representative city, that is. But it would surprise me if that is not the case. 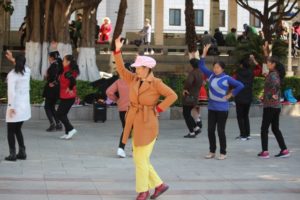 another thing that hasn’t changed: group dancing as excercise 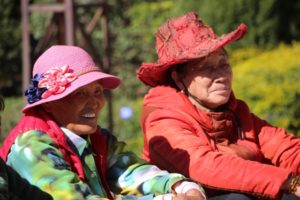 whilst two other women are just looking on 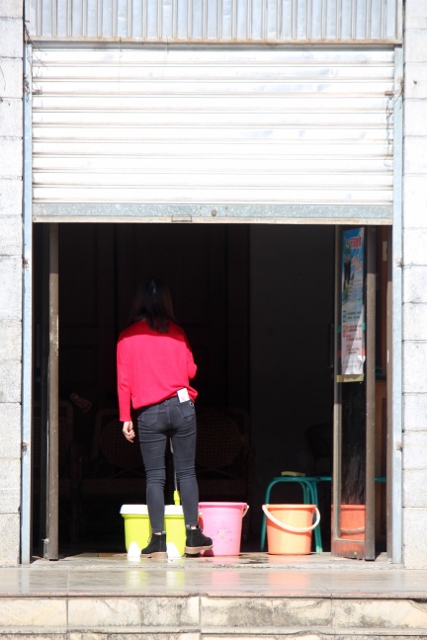 a ceaning lady choosing between buckets