one of the inside frescos in Bachkovo 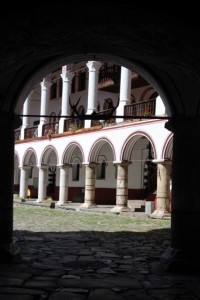 entrance to the Rila Monastery

One of the most respected institutions in Bulgaria are its Orthodox Christian monasteries, and some of the nicest are south of Sofia and Plovdiv

Bulgarians overwhelmingly adhere to Orthodox Christianity. You’ll find the occasional synagogue, or Roman Catholic church, there are quite a few mosques, too – from the time Bulgarians converted to Islam under the Ottoman Empire, to enjoy tax breaks -, but mostly, Bulgarians follow  the Orthodox church. And throughout Bulgarian history an important element of the church has been the monasteries. Not only thrived these institutions under the First Bulgarian Empire, which dominated the Balkans from 680 until defeat at the hands of Byzantium in 1014 AD – a time during which the monasteries were centres of scholarship, where, amongst other things, the Cyrillic alphabet was developed -, they also managed to maintain and protect Bulgarian culture and tradition during 500 years of Ottoman domination. They also played an important role in what is generally known as National Revival in Bulgaria, the emerging sense of nationhood in the 18th and 19th century, and they even became shelters for early guerilla fighters battling the Turks. As such, the monasteries in Bulgaria are held in high esteem, and many Bulgarians will, whenever they have the opportunity, visit a monastery as a sort of pilgrimage.

Two of the most important monasteries are located in the south of the country, in Rila and in Bachkovo. 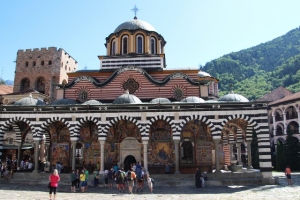 the church, centre piece of the Rila Monastery 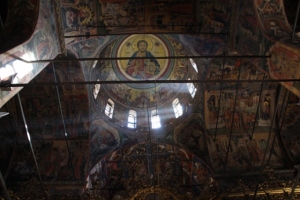 inside the church, the ceiling 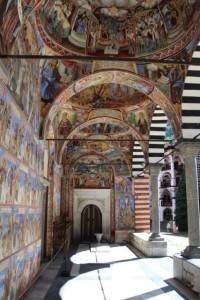 outside the church, equally nicely decorated, but more visible 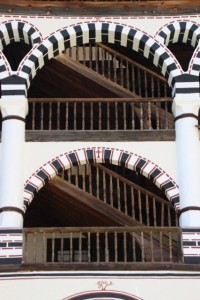 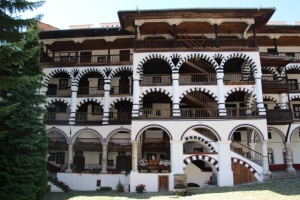 Rila Monastery is in the mountains south of Sofia. We drive up through narrow and winding river valley, in a long line of mostly Bulgarian cars. I said earlier that Bulgaria was not very touristic, but local tourists do come up to the monasteries (as do the occasional loud Spanish-speaking group). Traffic and parking is remarkably well organized, and entry to the monastery is free, as long as you are decently dressed (which is not very firmly enforced, anyhow). Lots of people, lots of photo opportunities, lots of selfies, and lots of candle lighting in the monastic church. But the whole experience is very impressive, a large compound, obviously with many resident monks – although we didn’t see that many – and frescos inside and outside the church. In fact, the monastery in its present form, and thus its present frescos, date from the 1830’s, after a fire had destroyed almost the entire structure; only a small stone tower in the middle apparently survived the flames.

an outside fresco of Rila Monastery, depicting hell 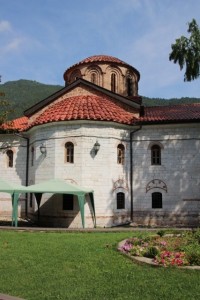 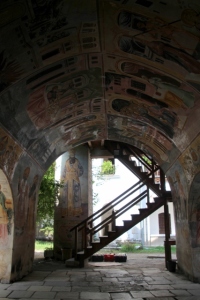 another decorated outside corridor 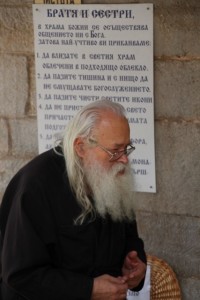 one of the monks in Bachkovo 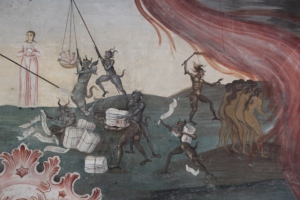 another depiction of hell, in Bachkovo

Bachkovo is south of Plovdiv, further to the east. Smaller than Rila, it is nevertheless impressive in its own right, with a 17th century church and extensive murals. Perhaps because it is easier accessible than Rila, the local tourist industry is better developed here, the access road to the monastery lined with stalls selling everything from traditional Bulgarian plates to tacky pigs, garden mushrooms and dwarfs. Once again, mostly Bulgarian visitors, and not even a loud Spanish-speaking group this time. Inside one of the two churches a child is being baptized – I didn’t know the Orthodox Christians did this, too – but t goes to show that the churches are still very much active, in Bulgaria. 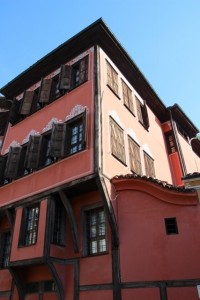 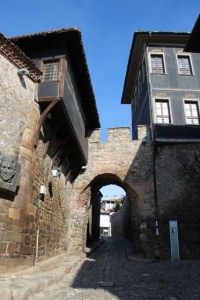 houses along the wall in Plovdiv 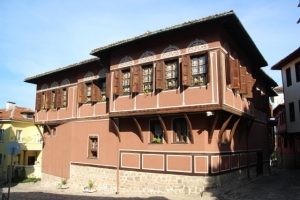 Nearby Plovdiv is a picturesque town, with cobbled streets and some nice, old houses, with a significant quantity of Roman ruins, and with a relatively modern center full of shops and terraces – a bit more relaxed than Sofia, perhaps, but also more provincial. Not a bad place to stop for the night, as we did, but don’t get your hopes up too high. The story goes that Plovdiv missed out on becoming Bulgaria’s capital city because the surrounding Eastern Rumelia province remained under Ottoman influence longer than the rest of the country, and when it finally joined in 1885, the rise and rise of Sofia was already unstoppable.

Next: from Plovdiv we make a detour to Istanbul 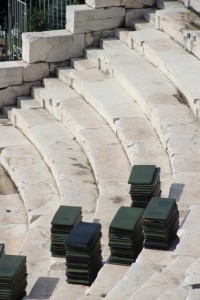 the Plovdiv Roman amphi-theatre preparing for a concert