06. Quba and Xinaliq 08. Nakhchivan, the country 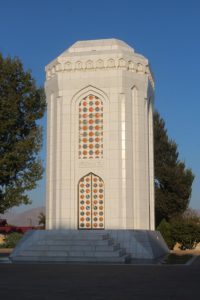 the Huseyn Javid tomb in Nakhchivan city, which already gives an indication of the state of the monuments here

Nakhchivan, capital of the exclave of the same name, is a surreal city, mostly newly-built or restored, and that count for almost everything.

We were all set for playing a round of golf on Sunday morning, with our golf club director friend in Quba, when we abruptly changed our plans. Although not in the original itinerary, we decided to go to Nakhchivan, the Azeri exclave wedged in between Armenia and Iran. Armenia and Azerbaijan are at war with each other (and driving around via Iran involves a 20-hour bus ride and extra visas), so the only way of getting there is by plane from Baku. To still make it on the Sunday we needed to leave Quba relatively early.

There are four planes a day between Baku and Nakhchivan, and it is a kind of commuter service, no frills, fixed price – around US$ 40 one way, heavily subsidized, I suppose, to facilitate a frequent connection between the two parts of the country. The one we got onto was almost empty. We booked ourselves in one of the three hotels in town, the five-star Tabriz International Hotel, which is really a four-star hotel that charges three-star prices. But very comfortable, and very friendly people. 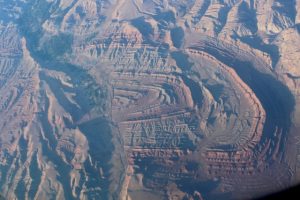 I am not so of the geological photos, but the view from the plane was quite impressive, for a geologist 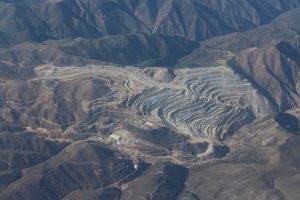 and this, too, is a geological photo of sorts, the Kajaran mine (in Armenia, so we were flying over enemy territory) 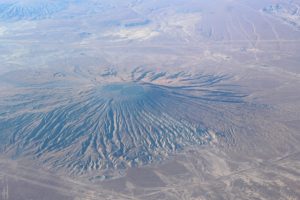 as I said, I am not so of the geological photos, but a neat little volcano, seen from the plane? 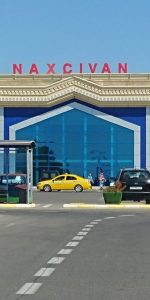 The capital of Nakhchivan, the Autonomous Region within the Republic of Azerbaijan, is also called Nackchivan. And it is a surreal city. Wide avenues, some easily six lanes, with almost no cars – there are never more than ten in view. No trucks, just the occasional bus, mostly empty; no bicycles, no mopeds or scooters, and in most places only very few people in the streets. Groups of bright yellow taxis are waiting for customers, who don’t seem to exist. Only in the ‘centre’, one-and-a-half street with shops, of which half are telephone shops, it is slightly busier. But it never gets noisy, the city is eerily quiet, no car horns hooting, no sounds. Occasionally, the mosque is calling, but even this is subdued. The roads are lined with large offices and new apartment buildings, impeccably maintained. Many have gardens, with beautiful rose shrubberies, flowering, obviously well taken care off. There are a couple of parks – here the city council allowed the occasional gardening short cut, artificial grass patches on the slopes – and for the rest, there are the monuments. 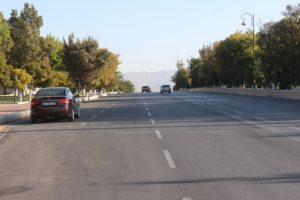 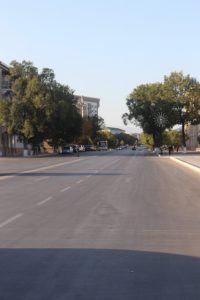 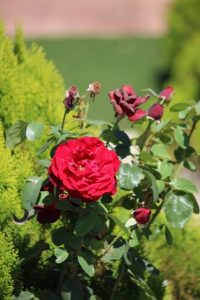 Nakhchivan is a city of roses 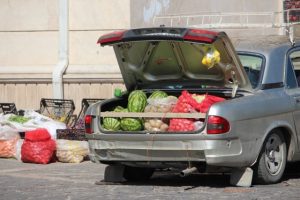 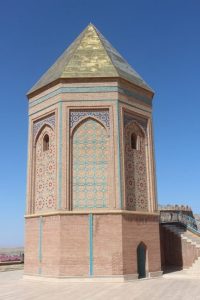 Noah’s tomb – perhaps? -, but restored in any case 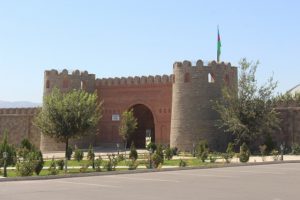 the Nakhchivan castle, 7th century but not anymore 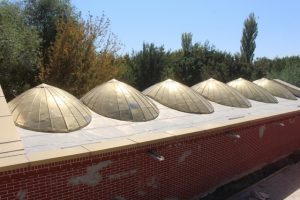 the ice house, being restored as we speak 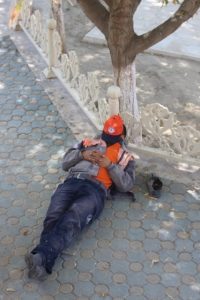 although not everybody received the memo of the Chairman of the Supreme Maljis of the Nakhchivan Autonomous Republic, yet

In order to get an idea of what to do, we visit the tourist information. At 10.30 am, the cleaning lady explains that the staff have already gone for lunch, which I can understand in a way, because there are really very few tourists that make it all the way to Nakhchivan. Staffing the tourist information office must be a rather boring job, the visitors book shows one entry every five or six days, and it is high season. On the other hand, what a bummer: finally there are two of them turning up, and you aren’t there! They made up in numbers in the afternoon, when we returned: no less than three staff were present, and the main character looked suspiciously like one of the receptionists in our hotel, across the square. He was trying hard, very friendly again, but actually not very knowledgeable, and needed the brochures we had collected earlier to answer our questions. So we took the brochures, and the maps, and worked out where to go by ourselves. 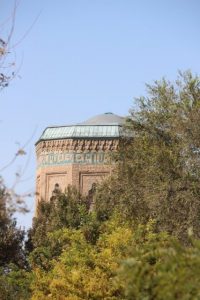 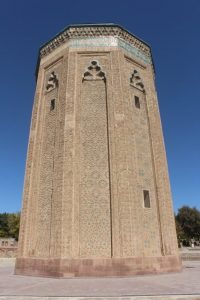 and not yet affected by the restoration drive 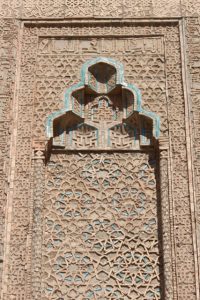 some of the original blue tiling 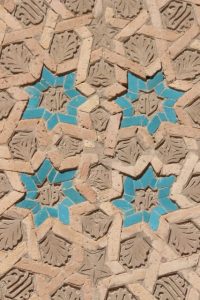 even where restored in the past, it is nicely done

And that is actually the story of most of the monuments in town. They all have been stripped of any trace of authenticity, thanks to ‘restorations’ ordered by the Chairman. The Zaviya Madrasse, now housing the tourist office, has been covered with a horrible orange brick-pattern veneer. The 18th Century Imamzade, built around a Shia tomb, is new.  The Khan Palace? ‘Restored’. The 12th Century ice house, in the brochure called one of the countries important historical-architectural monuments, is being plastered over as we speak. The only construction that has so far escaped the wrath of the Chairman is the Momuna Khatum tomb, built in 1186, and still standing in its original form, or at least a pre-21th Century form. Next to it is a garden with animal sculptures, which may, or may not be antique, hard to say – although there are rather many of them, also in other places. 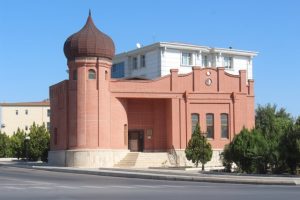 the Zaviya Madresse, and tourist office: the bricks aren’t even real

Not all of the monuments are ‘old’. The shining Haydar Aliyev Museum, occupying a large swath of land north of the centre, is new. The theatre opposite dates from 1922, but is also newly rebuilt. Several equally new museums are scattered around – of which the carpet museum was actually quite nice. The Friday mosque, the only mosque allowed during Soviet times, was ‘ capitally restored and rebuilt’ in 2007, no doubt also by Decree of the Chairman. Yet, somehow, all of this fits within the city, within the wide roads and the new apartments – or have they been patched up from the outside, only? 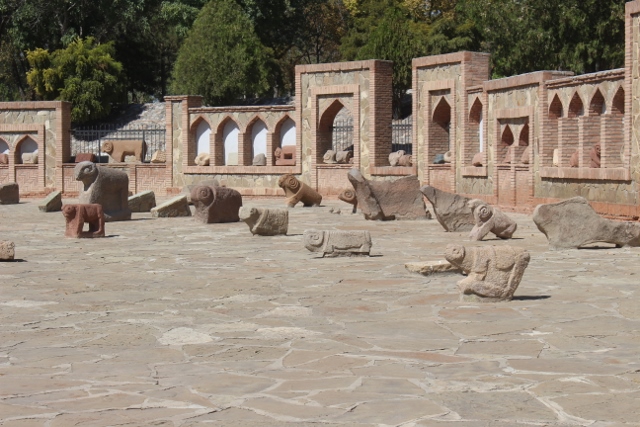 the sculpture garden with stone animals, mostly goats and sheep – no idea about the origin 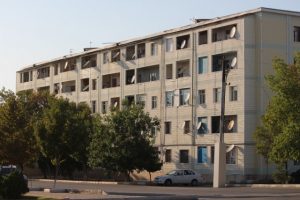 this could well be a patched-up palati, with a new outside cover 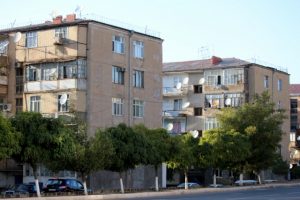 whilst these are a few of the remaining, original buildings 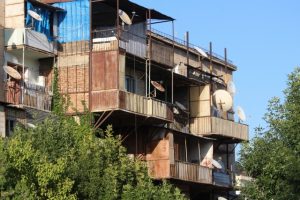 these balconies seem to be extensions to the original structure 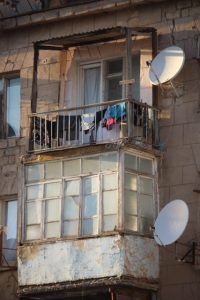 whilst this one has been closed-in, to create an extra room 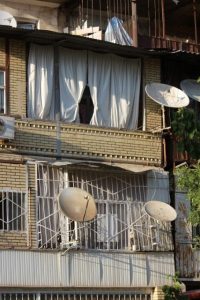 if you havent got anything else, a curtain will do 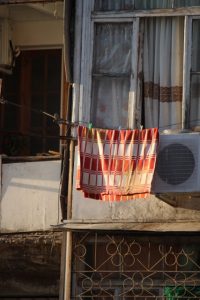 the only colour is provided by the laundry 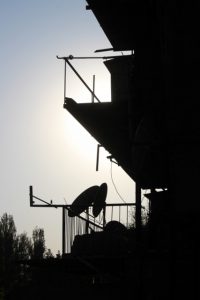 and satelite dishes are another ubiquitous element of the palatis

But wait, in one corner of the town, right behind that shiny Hayder Aliyev Museum, there are the good old palatis again. Not everything has yet received a make-over, and some ten or twelve old Soviet-style apartment buildings are still standing, in their old glory, with closed-in balconies to expand the living space, with laundry outside, corrugated iron sheets to cover leaking walls. No glass fibre cable connection yet, so every apartment its own satellite dish. But I am sure that in a few years’ time those, too, will have been either replaced, or refurbished. And then the entire city will be an impeccable model of cleanliness, peacefulness, impersonality. Lacking any authenticity and originality. Lacking life, really. Surreal.

But an experience not to be missed!

next: the rest of the exclave Nakhchivan 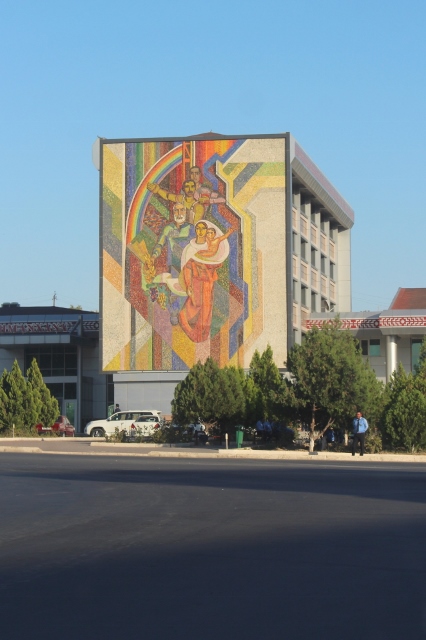 and the wall mosaics were also very popular during Soviet times 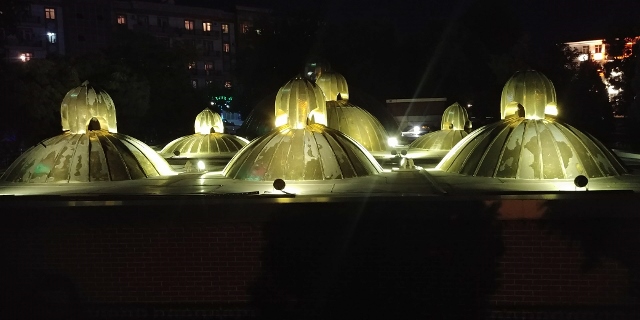 the eastern bathhouse, in front of our hotel, at night