08. a random day’s drive in Geogia 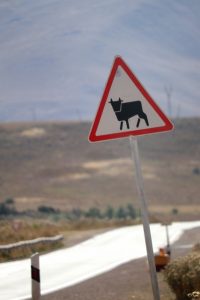 fair enough, on the Georgian roads they warn you for other road users

Driving in Georgia poses certain challenges not necessarily familiar to those used to western Europe.

We all agree that driving in Georgia s perhaps a tad different from driving in any comfortable Western European country, say, The Netherlands, for instance. Georgian roads create a few challenges that we in Western Europe are not normally used to. I have already described driving into Svaneti, on a partly unsurfaced and potholed road. But it is not just the conditions of the roads themselves, what happens on the road is equally challenging. 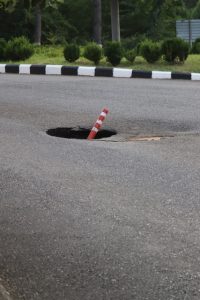 this is why we don’t drive at night: pothole in the middle of a junction

First and foremost, of course, there are Georgian people with cars using the road. Where in most Western European countries road users take into account other road users, that is not necessarily the case in Georgia. The concept is to get a fast as possible from A to B, and if that means overtaking at high speed in a bend where one cannot see much ahead, then so be it. In my experience, the urgency seems to increase just after lunch on Saturdays, I suspect because the lunch has been finished off with a few, or more, glasses of chacha – the local fire water.

However, there is a way to make them slow down. No matter how speed-maniac the average Georgian is, as soon as there is the slightest bump in the road, a small traffic ramp, for instance, cars come to a screeching halt, to inch themselves across, before they accelerate like mad again. Only to repeat the process a few hundred meters further: villagers are smart, and know this is the only way to protect themselves if walking. Even a thick rope laid across the road will do the trick. But nothing is so effective as a railway crossing, these really need to be taken with the utmost care, everything to protect the precious car. Not seldom does this lead to a real traffic jam, kilometres-long rows of car waiting their turn to pass the crossing with the utmost care. Seriously, no other cause! And such a long row of cars then invites others again to try to overtake, because that is ultimately the quickest way to get from A to B, right? Or so it seemed at the time, because by now the whole road is blocked, and cars that have just managed the railway from the other direction, also get stuck. 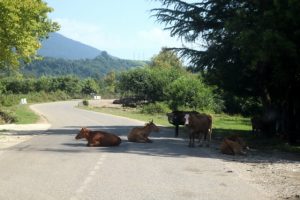 cows looking for shade, comfortably under the trees – in the middle of the road 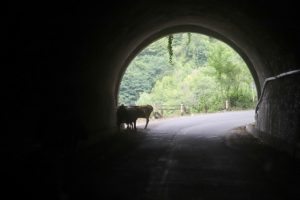 and even trickier, cows look for the shade, inside dark tunnels

Unfortunately, this concept of overtaking if you can go faster than those in front of you, is also applied on busy two-lane roads with dense traffic: there are always plenty of drivers who try to create a third lane, in between two opposing lanes of cars. And if you, as a driver, try to close off the opportunity for the one behind you to sneak past on the left, he’ll has already just done that on your right, there is no holding them back. Anyhow, I am the guest here, I adjust. But challenging it is.

What else is there, on the road? Well, there are cows, they either walk, stand or lay down on the road. Without any intention to move. So you need to avoid them – but that car coming from the other side needs to do the same. If it is hot, cows have the tendency to get into the shade of a tunnel – which is usually pitch black, only the tunnel end visible. Can be tricky. Next to cows – which I even saw on the separation in the middle of the motor way -, there are the pigs, freely scuffling along the road, some huge, others small and hairy. Yet, they provide less of a risk, because they tend to stick to the side of the road. Unlike dogs, who may, or may not, decide to chase your car. And in any case have  tendency to lay down under your car after you have parked, because, again, nicely in the shade. So check what is under your car before you drive off. 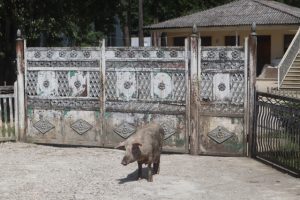 pigs have a tendancy to stay at the road side

Compared to the animals, people walking along the street are more predictable. They generally tend to move aside somewhat when a car approaches, but not too far. Only on a bicycle they are really dangerous, because they don’t know how to use it, and uncontrollably swerve from left to right. Challenging at the best of times.

Luckily, we have the monster, our sturdy 4×4. Which gives us a bit of protection, I’d like to think. And which, thanks to its stiff suspension, experiences a lot less hindrance from tiny bumps in the road than the average Georgian perceives his car to suffer from. I hardly overtake other cars here in Georgia, but I do enjoy blasting past them on poor road surfaces, when that average Georgian is inching forward – temporarily forgetting how to get quickest from A to B.