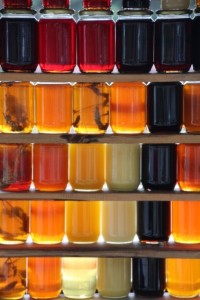 Honey being sold in Southern Bulgaria, on the way to Turkey

Although the objective of this journey, and thus this blog, is Romania and Bulgaria, we couldn’t resist the temptation to cross into Turkey for a long weekend Istanbul, a temptation generated by some private arrangements with old friends and acquaintances. After all, Istanbul is so close, no?

In fact, Istanbul proved to be quite a lot further still, a good day’s drive from Plovdiv. And it includes a non-EU border crossing, along the main highway at Edirne – it is at these moments that one starts to appreciate the EU again. Leaving Bulgaria is a piece of cake, a few customs officers wave everybody through from a small window in a cubicle along the road. Only to arrive, 500 meters on, at the Turkish border, a vast array of cubicles, 10-15 next to each other – of which only one is open. When we finally get to the cubicle, the border policeman casually asks us for our visa. Visa? Do we need a visa? Of course we need a visa, every Turk entering the EU also needs a visa, no? He then casually directs us to a visa office, where we buy our visas, and off we go… , only to be called back, and sent to the next cubicle, to check car details. Not that any of that was announced, or signposted. All in order with the car, and off we go…, only to be sent back again at the next barrier, because we are still missing a little sticker, which we need to obtain from customs. Not that any of that is signposted. A customs officer casually looks in the back, and gives me a sticker with bar code from a huge sheet, seemingly at random – yet, the next guy, the one who initially sent us back, casually reads the bar code, asks me whether I am Bruno (how on earth does he know? Or is all that casual perhaps less casual than it looks, and in fact extremely well organized?), and off we go. Really. 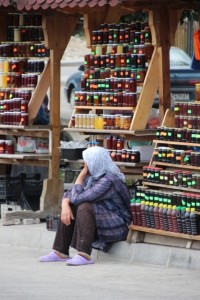 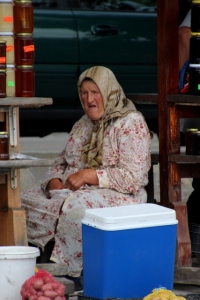 one of the sellers

Where the road from Plovdiv to the border was still mildly interesting, not in the least because of local people selling their locally produced honey, homemade jams and fruit conserves, the one from the border to Istanbul is positively boring, until one nears the city itself. “Nears” means anywhere within 20-30 kms, I guess, when the first suburbs appear – colonies of new, all-similar houses, in the middle of fields, or stacks of brand-new apartment buildings, alternating with shopping malls. Having seen some of the Romanian and Bulgarian cities, Turkey is a different ball game all together. And Istanbul is a massively impressive city, that becomes abundantly clear whilst driving into such a megalopolis. 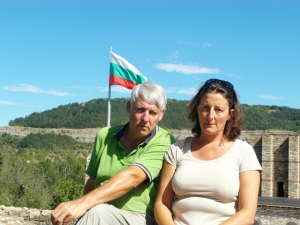 There is not much I want to write about Istanbul, the link with Romania and Bulgaria is a tenacious one, at best. The former oppressor’s capital, perhaps (or one of the former oppressors, whichever way you prefer Balkan history). There is, however, one striking observation that I don’t want to leave unmentioned. After a few days of Bulgaria we just about got used to the Bulgarian way. Bulgarians are not very forthcoming people, they are at best indifferent. They won’t get out of their way to help you voluntarily, and most wont, even if you ask – if you manage to ask, because Bulgarian is not the easiest of languages, and not helped by the fact that the script is Cyrillic. The contrast with Turkey couldn’t be bigger, from the first border policeman onwards, to the local sweeper, all the other – completely relaxed – customs officers, the fuel station attendant, and anybody else we met over the next three days. Everybody smiles, everybody tries to help, everybody just wants to talk to you. I don’t know of many borders where the difference between people’s attitude is so enormous as the Bulgarian-Turkish one.

In three days, we will have to head back… 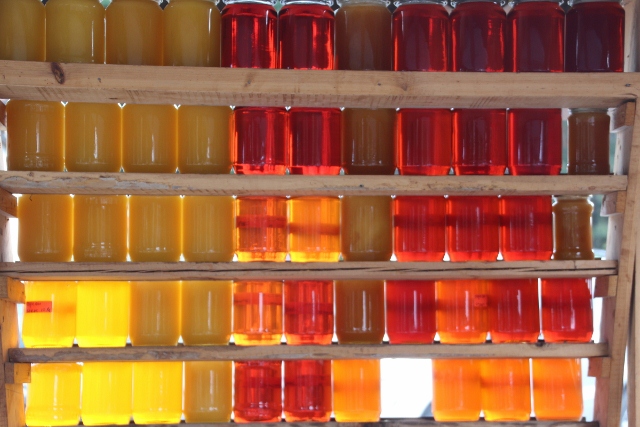 4 Responses to 08. detour to Istanbul