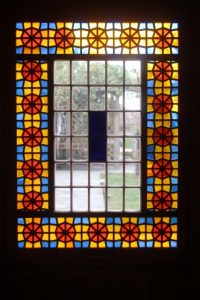 stained glass window in the Khan’s winter palace in Sheki

On the way to Georgia, we stop in Sheki, to admire some 18th Century palaces, as well as an old Albanian church in Kish.

Back in Baku, we take the night train to Sheki, our first stop on the way to the border with Georgia. A rather uneventful, not all that uncomfortable journey drops us at a little past 7 am at the Sheki station, which is some 20 kms away from the town. With one taxi driver left, our negotiation position is weak, to say the least, and we pay way over the odds to arrive at our hotel, an old caravanserai which has been renovated – commercially, not by Decree. We have been to many caravanserais in the past, but never slept in one, a nice experience. 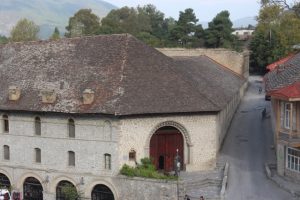 the refurbished caravanserai, our hotel in Sheki 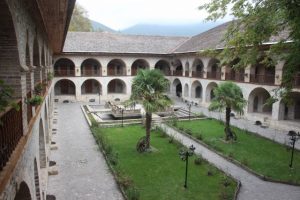 the inside courtyard of the caravanserai 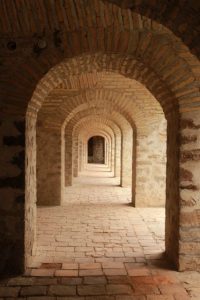 corridor in the caravanserai, high enough for camels 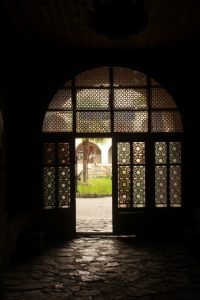 a door in the caravanserai

Sheki is a firm stop on the Azerbaijan tourist trail. An hour in the courtyard of our caravanserai, and at least six tour groups – of which three Chinees – have swept through the building, big buses parked outside. The highlight of Sheki is the Xan Sarayi, the administrative Summer Palace built in 1762 by the then-Khan Haci Celebi of the Nukha Khanate, one of the many royal statelets of the time, which eventually all ceded to the Russian crown (Nukha did so in 1805). The nicely façaded palace is actually quite small, only one room deep, but excessively decorated with wall- and ceiling frescos, mirrored corners and a front of stained-glass windows. No pictures allowed inside, which the local guide makes quite clear (“No pictures! Cameras everywhere, you fined 300 manat!” – we have noted before that Azerbaijan is an extremely friendly country, until you get to the tourist spots). The palace is located in a walled compounded, where one of the other nice building is an old circular structure, perhaps an old mosque or church, which now houses the local museum (“Come here! Must see museum! Pay now, 2 manat!” – the same level of friendliness, and it has nothing to do with language skills, I am sure). Another intriguing building on the compound is the old prison, or so we are being told by the tourist information guy (who was actually very nice and helpful).

the summer palace, from the outside (no pictures allowed inside) 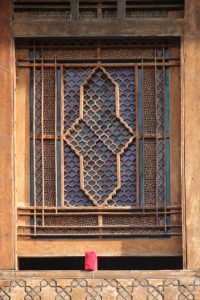 a window of the summer palace 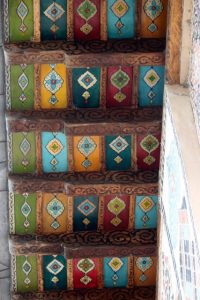 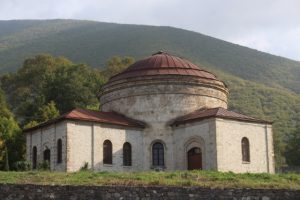 the museum, an old church perhaps, within the fortress walls of Sheki 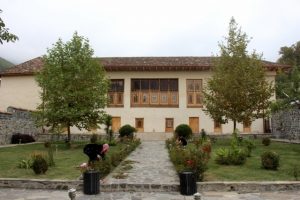 the winter palace, with rose garden being tended in the absence of large numbers of tourists 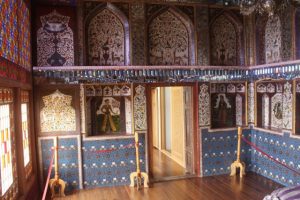 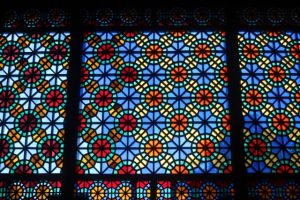 some of the stained-glass 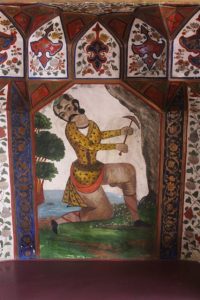 one of the frescos 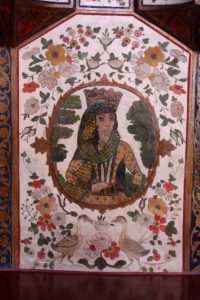 and another one, women being a frequent subject matter

In the other Khan palace, the Winter Palace outside the compound, and somehow much nicer because there are no other tourists whatsoever, we are alone. The caretaker is, to stay with our observation about friendliness, a very nice woman, who is more concerned about her beautiful rose garden then anything else. We are allowed to take photographs, although here only one of the rooms is decorated – still decorated, I must say, as I suspect that the other rooms have been whitewashed sometime in the past. 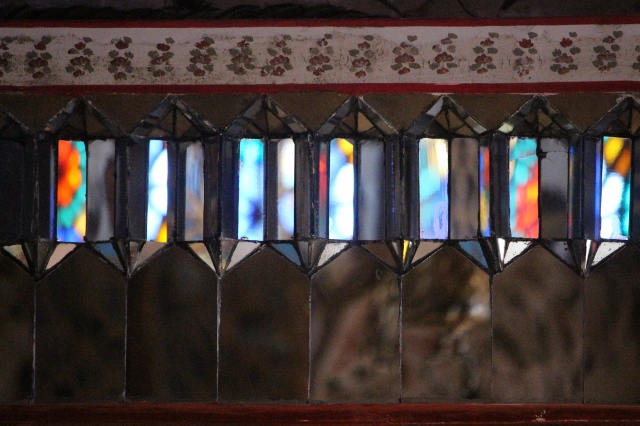 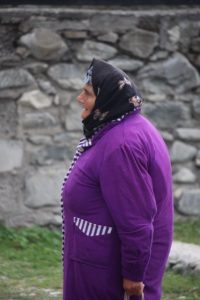 a Sheki woman taking a walk 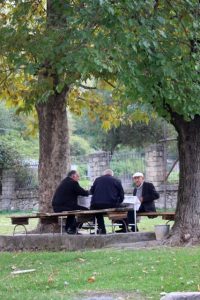 men in the park discussing the world 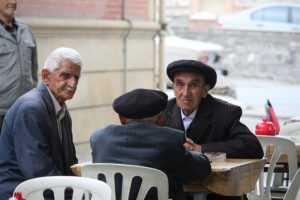 a table at a tea house, in another park

And for the rest the old town of Sheki is a pleasant enough place to wander around, observe the old houses, their balconies, the local mosque. And observe the old people. In the main square the terraces of several tea houses are full, at 11 in the morning, with men playing dominos, or just conversing, continuing their dialogue where they ended it yesterday. Very peaceful, altogether. 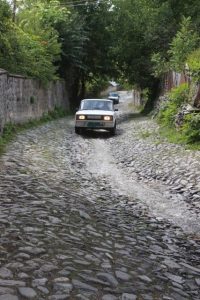 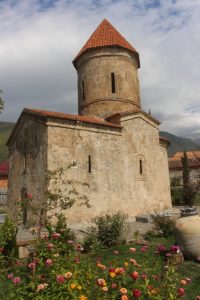 the Caucasian Albanian church in Kish 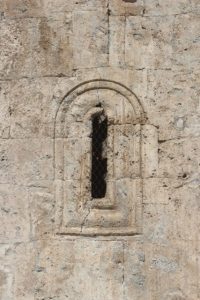 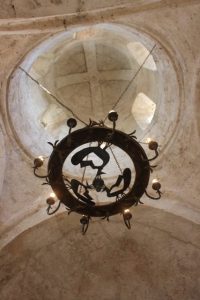 the ceiling of the Caucasian Albanian church

In the afternoon we take a local bus to the village of Kish, to see one of the few remaining Albanian churches. As I explained earlier, these have nothing to do with present-day Albania, but are a remnant of one of the oldest Christian nations, Caucasian Albania, of which little was left after the Islamic conquest of the 7th Century. The church is now a museum, well restored, and providing a wealth of information about the Albanian civilisation. Whereby I get the impression that this is important for the Azerbaijanis, because it is in fact their only claim to an ancient past; today’s Azerbaijan is a relatively new nation without any collective history to speak of, and the achievements of Caucasian Albanians are claimed as national heritage.

The village of Kish itself is one of these typical mountain villages, cobbled streets, old houses, not much happening. We come across one curious cemetery, just slabs of stone marking the graves arranged in a seemingly random manner, yet, with an entrance that highlights its importance. The only restaurant open in the whole village serves us a wonderful home-cooked lunch, whereby about half the dishes we ordered actually arrived, together with a soup we didn’t order – the rest got lost in translation, communication proved difficult. But who cares? The charm of traveling in unknown territory. 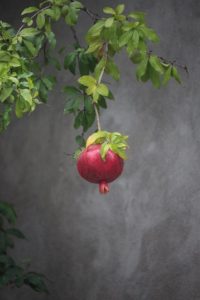 a pommegranate, it is the season 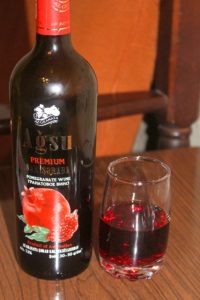 they make wine of pommegranate, too, which we had to taste; once