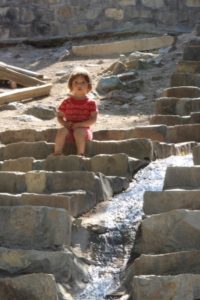 little girl on the stairs in Ushtebin village

The northeastern border of Iran is defined by the Aras River, where old fortifications contrast with the current military infrastructure. 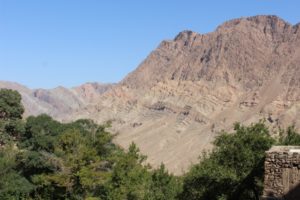 the view from Saint Stefanos church

We are rapidly adding to our World Heritage ‘been there, seen it’ list – Iran has quite a few UNESCO World Heritage sites, and a trip to the Aras River, which forms the border between Iran and Azerbijan, bags us two more before lunch. 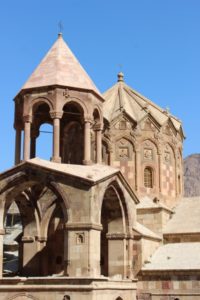 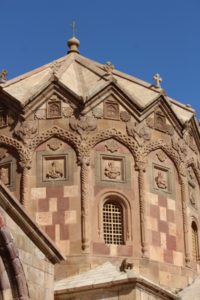 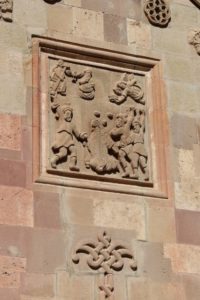 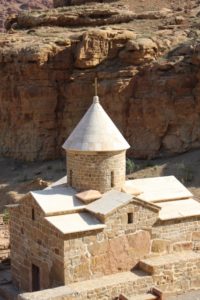 Not that we are really collecting, of course, we would anyhow have come to the Armenian Saint Stephanos Church, allegedly a church since 62 AD, but its current structure dating back to the 14th Century. The setting of this heavily fortified church – thick walls around the complex, with defense towers and all, quite possibly not a luxury at the time – is awesome, with views over the Aras River and the surrounding mountains But if we would have also made the trip for the small, heavily restored Choopan Church, of which the signboards on site alternatively claim a 13th and a 15th C origin, is doubtful. In the event, both churches were closed, so we could only admire the outside, and in the case of Saint Stefanos, half of it in scaffolding, too. You sometimes wonder whether there is any political motivation to award UNESCO World Heritage status; I have seen many similar churches in Albania and in Turkey, but these are not in Islamic Republics, of course. 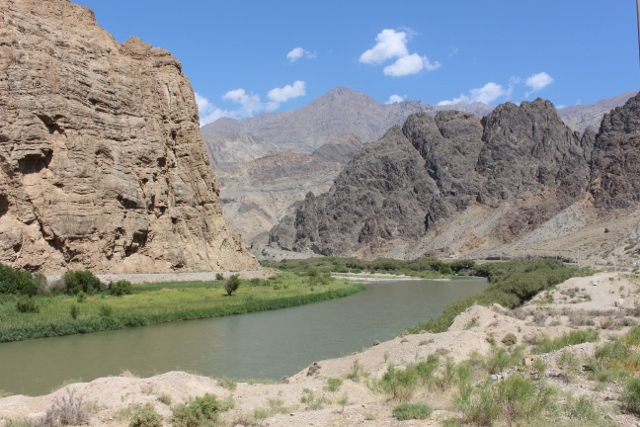 The Aras River, on its way to a narrow gorge 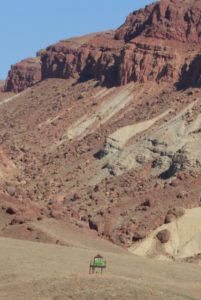 red-coloured bare mountains in Azerbaijan, protected by a guard tower 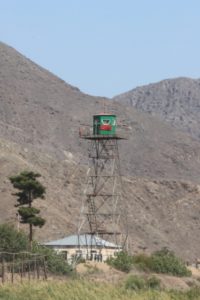 From the two churches we drove down the valley of the Aras River. One cannot but notice the various military installations on both sides of the border. The Azerbijanis have constructed, every several kilometers, or so, jolly-painted red and green metal towers, sometimes surrounded by a small army camp. On the opposite side the Iranians have constructed a series of individual round towers – they could have been mistaken for historical relics, if you wouldn’t know better, and if there weren’t so many around -, also sometimes accompanied by small bases surrounded by barbed wire. Further downstream they ran out of stone towers, and replaced them with metal ones. Which are empty, there are no guards here! And I expect that the towers on the other side are equally empty.  And why would they not be be, the relations between both countries are good, and in the unlikely event of an invasion, from either side, the impressive mountain ridges on both sides of the valley form a much stronger defence than the flimsy towers and barbed wire, or the fairly shallow river. The relaxed atmosphere here comes back at the various army check points: the soldiers are more of the friendly ‘hello, where are you from’-type than that they are fierce-looking defenders of the border. 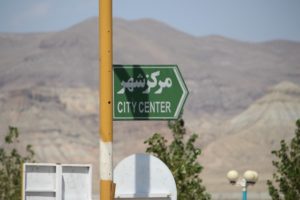 found this sign in a small village along the Aras River, pointing… 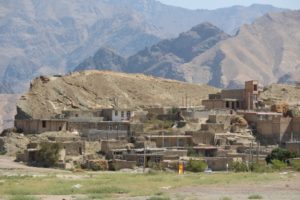 …at this tiny little village

Somewhere along the border, the country on the other side changes into Armenia, and then back to Azerbijan again, with more than a bit of territory disputed. Which is visible from the deserted, quite possibly bombed-out villages, and from abandoned, quite possibly burned-out railway equipment, , on the now disused tracks across the river. It is a sad blob on the otherwise spectacular landscape of towering red and white mountains. 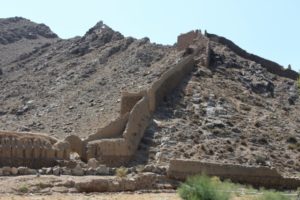 and this is a second castle, that of Abbas Mirza, perhaps just 300 years old – and restored 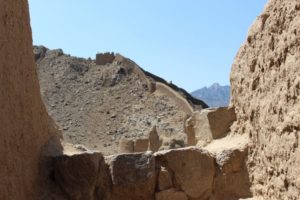 another view of Abbas Mirza Castle

Further down-river there are a couple of ruined castles, first the Gavour Castle, of which only the remnants of a wall run up the steep slope. Not much, until you realise that this is from so-called Urartian times, 8th and 9th Century BC, ie quite some time ago! A little further is the Abbas Mirza fortress, much more impressive looking, with walls and watch towers running along the mountain ridges, and a brick and mud castle structure in the valley, but also much more recent, probably 17th Century. 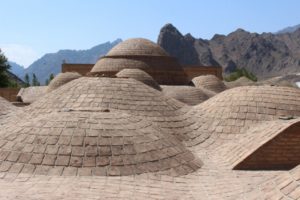 the roof of the hamman in Kordasht village 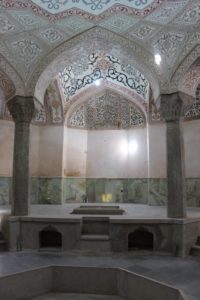 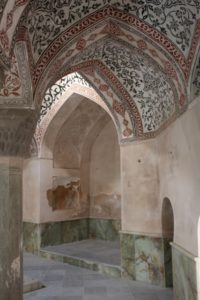 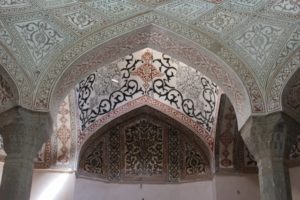 detail of the arch and roof decoration

Just past the fortress, in the village of Kordasht, is a beautifully restored hamman, a bath house. Not finished yet, but much of the structure has been nicely patched up, with green marble wall tiles and neatly finished floors and benches and baths. For however long it will last I don’t know, but there is also a not-yet restored part, where the original structure, including original stucco, is still visible. 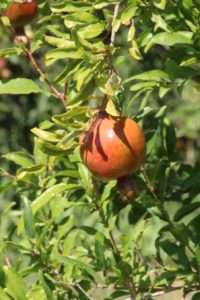 behind the hamman, a pommegranate orchard 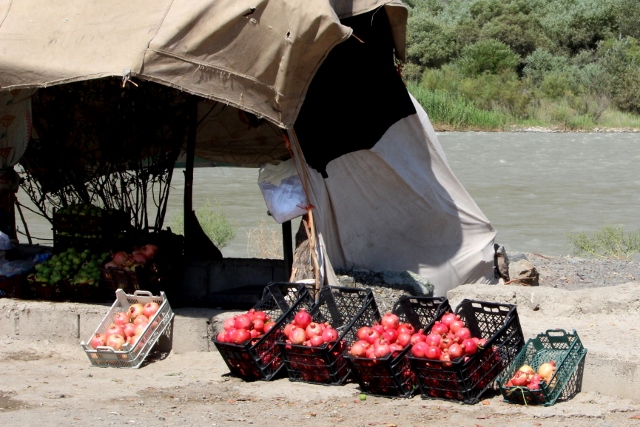 pommegranates being sold along the road 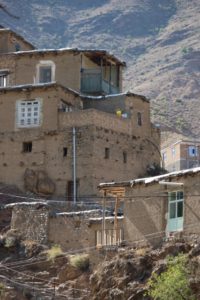 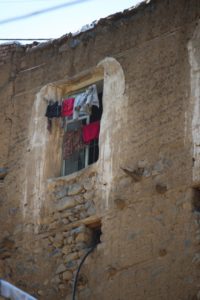 laundry in a window in Ushtebin 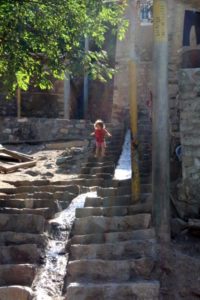 The village of Ushtebin, touted as the next Masuleh, but then without the tourists, is a little off the river, at the end of a small side road. Houses are indeed stacked up against the mountain slope, but to compare it with Masuleh goes a bit far. Where Masuleh – also a UNESCO World Heritage Site – no doubt gets lots of money to maintain its authentic aura, the people of Ushtebin have no such luxury, and thus build whatever is most practical, and that is not always the most picturesque solution. Some parts of the village are still quite nice, along steep path hewn out of the rocks; no newly cemented tourist-friendly steps here!  But new brick construction rapidly modernizes the outlook, and before long there will be not much tourist appeal left, I fear. 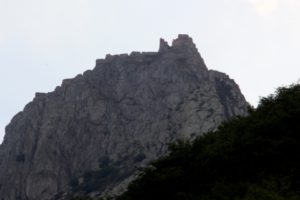 Babak Castle, a good two hour’s walk uphill (for which we, unfortunately, had not enough time)

The return trip to Tabriz led via Kaleybar, and a distant view of Babak Castle, the home of a 9th Century Azeri folk hero, perched upon a high mountain top, and through the summer pastures of nomads, who have pitched their tents not far from the road. All together a long day, with quite a few interesting stops, framed by the pleasant landscape of the river valley and the robust mountains, especially on the Azerbijani side. Nice, although perhaps not mind-blowing.

next: the trogdolyte village of Kandovan 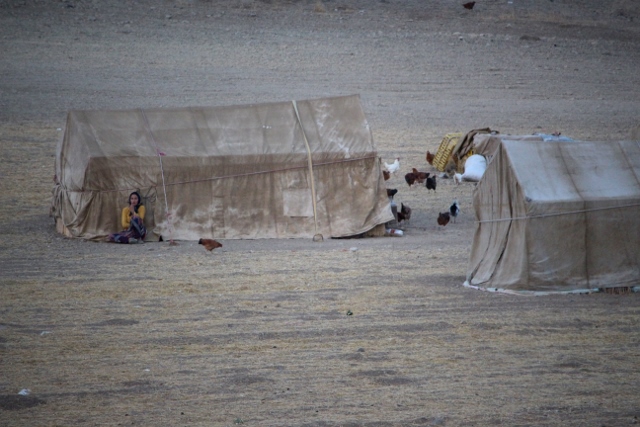 nomads along the road back to Tabriz