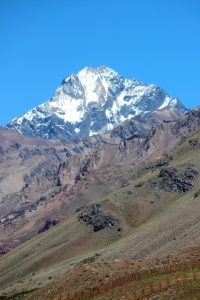 Crossing the Andes is an experience, in terms of spectacular mountain views, but also the customs procedure for bus passengers.

It is time to leave Argentina behind, at least for the time being. From Mendoza it is a five-hour bus ride to Santiago, Chile’s capital city. Plus whatever it takes to cross the border. The road takes us up the Andes on one side, and down the other, over the Paso Internacional Los Libertadores, a reference to the campaign of General San Martin in 1817, who scaled the pass with a sizable army of 4000, thereby totally surprising the Spanish on the other side – but also losing a third of his men during the crossing. These days the border, having been defined along the watershed and the highest peaks, is much lower, at around 3200 m, in the middle of a 3 km tunnel. 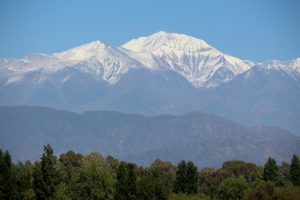 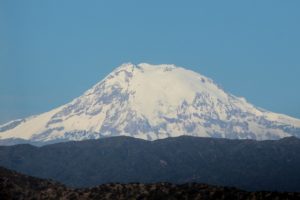 including a goog view of the Tupungata volcano 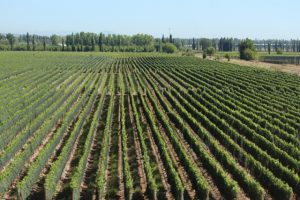 whist on the other side, wine yards and wine yards

For the first 45 minutes, or so, we drive parallel to the mountains, providing a spectacular view of the steeply rising snowy peaks; I cannot really work out which is which, but the volcano-shaped one on the left may well be Tupungato. So far, all around us wine yards, proof that the Mendoza area is indeed the largest wine producing area in Argentina, providing some 80% of the total production. 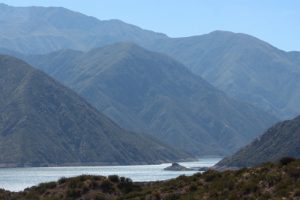 an artificial lake in the Mendoza River

Then we turn right, into a valley following the Mendoza River upwards. Along the valley we can trace much of the ancient Transandine railway, a 248 km long trail from Mendoza to Las Rosas de los Andes in Chile, built between 1887 and 1910. This provided the last piece of railway of an over 1400 km line connecting Buenos Aires on the Atlantic coast with Valparaiso, Chile’s port on the Pacific. The line was ultimately abandoned in 1984. Much of the narrow-gauge track is still in place, although overgrown; there is a tunnel and several metal railway bridges, from tiny – often collapsed – bridges across small streams to much more impressive steel structures crossing the Mendoza River itself. And further up, metal structures protecting the track from avalanches have by now largely collapsed themselves. Every so many years, including recently, there is talk about reviving the line again, but not much has come from it so far. 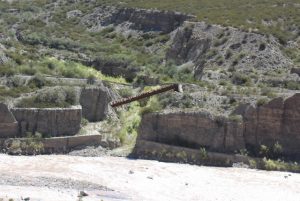 a train bridge collapsed, whist the tracks are still hanging 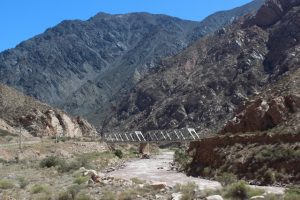 and another Transandine rail bridge, across the Mendoza River 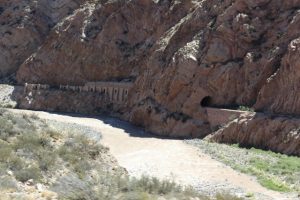 and the occasional train tunnel 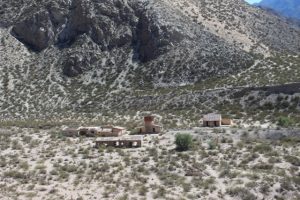 even old stations are still present along the line 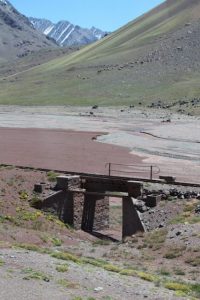 a small bridge higher up 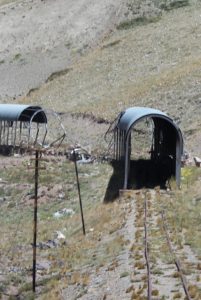 and avelanche protection, half collapsed 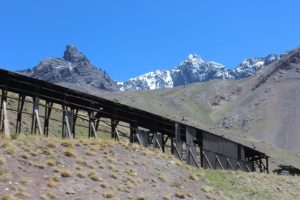 more protection of the tracks, in better state 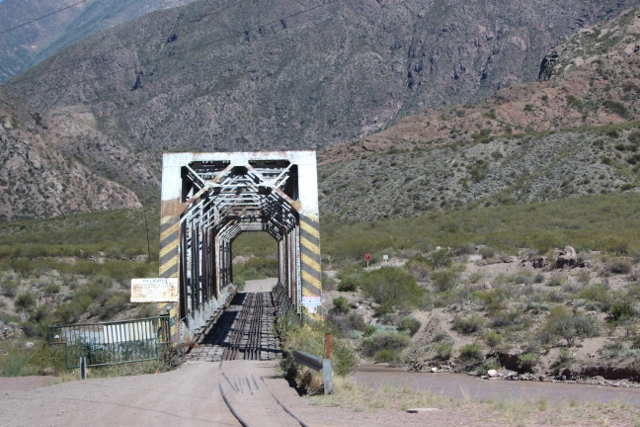 tracks still present on the bridge 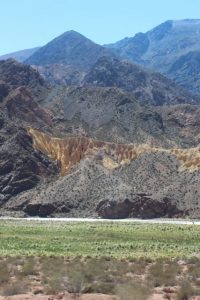 sharp colour contrasts in the rocks 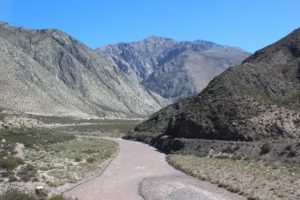 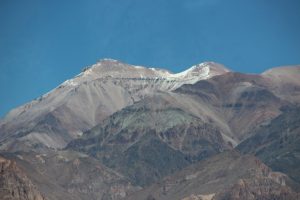 and little vegetation, at this height 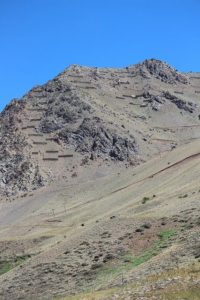 in the winter this is all snow-covered 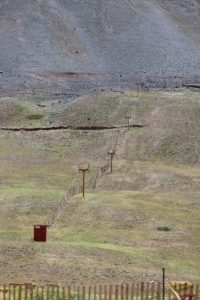 with plenty of skiing opportunities, and infrastructure 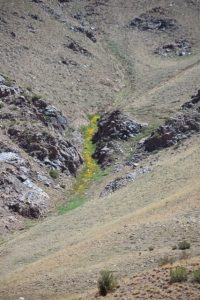 a rare occasion for flowers, along stream beds 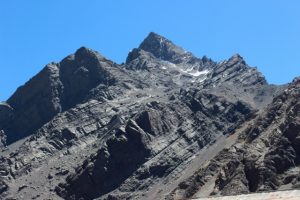 but mostly, the rocks are pitch black

There are plenty of mountains to admire, plenty of high peaks, among them the Aconcagua, with 6961 meters the highest of the Andes, and in fact the highest in the Southern and the Western hemisphere. The bus doesn’t stop at the viewpoint for the mountain, so for pictures there is a 30 second window on the right side of the bus. Luckily I sat on the right side!

There is hardly any vegetation, at this altitude – and neither is there on the lower flanks, because of the dry, desert-like climate. In the occasional stream some yellow flowers get a chance, and sometimes a cactus survives, but that’s all there is. 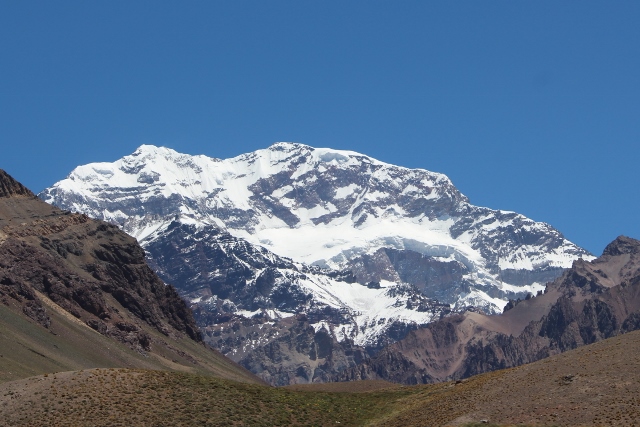 Aconcagua, in its full glory 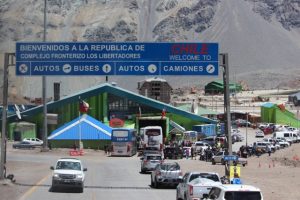 the border post, and we were not the only ones

Then comes the border. It is busy. And let’s say that the border control is not in a hurry. For the first hour and a half, or so, we wait in the bus, as there are other buses ahead of us. Then we are finally let free, but not really. We are clearly instructed to form a proper line and wait – under no circumstances should we approach the customs individually! After another five minutes the line starts moving, like a school class on the way to the swimming pool, coached by the bus attendants, who direct us one by one through passport control. Then follows the luggage check. We are lined up in two rows, with a bench in from of each, where we need to put all our hand luggage. A dog is sent to sniff every backpack several times. Chile is paranoid about letting in plants, fruits, anything really, which can bring pests and infections. It feels like a police line-up, those you see in films. Next are the suitcases, which are X-rayed one by one. Those considered suspect are being put aside, and the owner is called forward out of the line-up. All very confronting. Finally, after at least another hour, we are marched back into the bus, and continue the journey. Yet, I have to admit that there is a certain efficiency in this process. You would hate to see every passenger doing this individually. 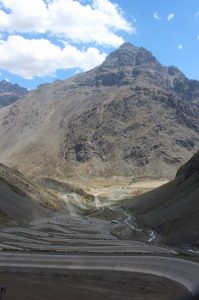 on the Chilean side, multiple switchbacks 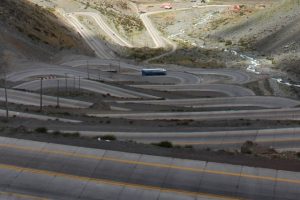 an impressive feat of engineering 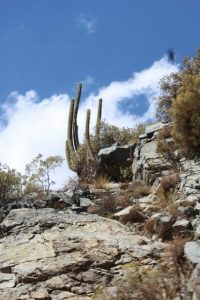 Soon after the border crossing, we start the descent, which goes much steeper than the ascent on the Argentinian side. In around 30 switchbacks we come down from the high mountains to the foothills, an impressive feat of engineering. The road surface all the way down is covered not with tarmac, but with concrete, much better resistant to temperature changes and snow. Once down, a little more vegetation is appearing, some small trees, and occasionally large cacti, seemingly in colonies. But the landscape never gets as dramatic again as on the other side.

And the motorway to Santiago is outright boring. 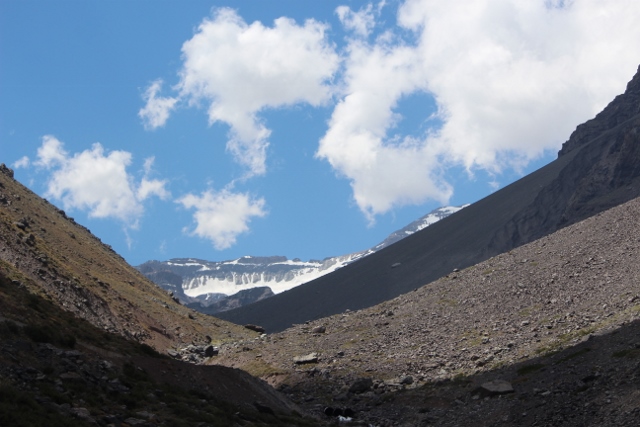 and on the Chilean side it is cloudy…