11. a look-back at Azerbaijan 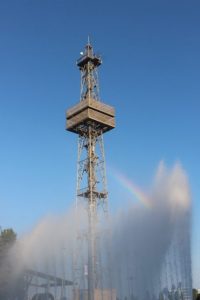 the symbol of Azerbaijan’s wealth, on the Baku Bulvar

There are few touristic highlights, yet, we stayed longer than planned in Azerbaijan, because with all its faults and contradictions it is a lovely country.

Before we left for the South Caucasus, quite a few people asked me what there was to see in Azerbaijan. Looking back, I have to admit: except for Baku, there is not much in terms of touristic highlights. Of course, the mountains beyond Quba, and those in the Ilisu area, are great for hiking in the summer, but there are other, better places in the world. Xinaliq village is charming, but many of the Iranian villages are equally charming, or more so. The Khan’s palace in Sheki is nice, but compared to some of the extravagant multi-storied  houses and palaces in, again, Iran, it is actually very humble. Almost all of the historical buildings have been vastly over-restored, many have been rebuilt from scratch, without much authenticity left. And the number one tourist sight outside Baku, the petroglyphs in Qobustan, well, were also not the most convincing examples I have seen in the world. 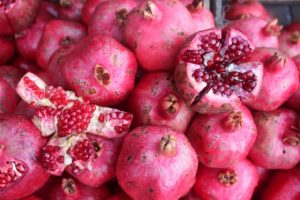 to add a bit of colour: pommegranate in the market 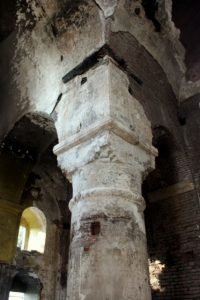 the inside of an Albanian church, Azerbaijan’s claimed heritage

Some of the information I provided about the various monuments and tourist sights we encountered comes from local material, the objectivity of which may need to be questioned. This is the country with the oldest salt mine, the first commercial oil well, the greatness of the Caucasian Albanians (the only one of three Christian Kingdoms that did not survive the Islamic conquest, Armenia and Georgia both did) and several genocides against its people of which the general history books have little to say.

Azerbaijan struggles a bit with its own history. Not long ago, say, a little over 200 years, or so, the country didn’t exist, it was just a collection of small khanates, heavily under the influence of Persia. Which then all fell to Russia from around 1805 onwards. And those few years of independence around 1920 don’t really count, that was more than anything else forced upon them because of the Tsarist Russian collapse at the hand of the Bolsheviks. Only since 1991, the next collapse, this time of the Soviet Union, has there been a stable, independent Azerbaijan, helped by its vast oil reserves, and helped by strongman Hayder Aliyev, now succeeded by his son – of course. 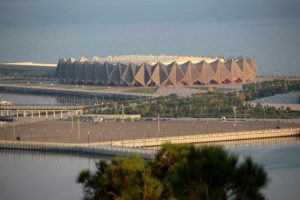 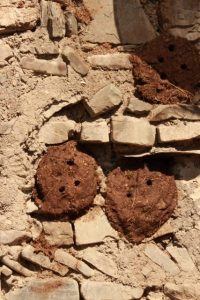 …vs cow-dung fueled economy of the Middle Ages.

The results of that are visible, for instance in modern Baku and in over-developed Nakhchivan – but not yet in the mountain villages, many of which have barely moved from the Middle Ages. Independent Azerbaijan is also streets, where cameras conspicuously follow what happens in all directions. And talking to those who speak English – the younger generation, the older one only speaks Russian -, and who are adamant that everything is honky-dory in the country, lots of jobs, no corruption. Yet, everybody shows an unhealthy respect, bordering on fear, for the police. And outside observers are a lot less enthusiastic about the future prospects of this country: the oil runs out, the entrenched war with Armenia seems unsolvable, and opposition suffers from political repression. 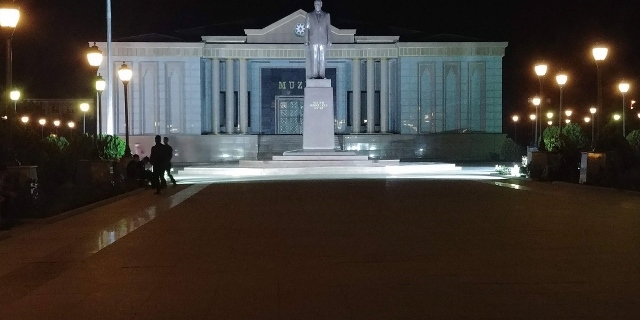 Haider Aliyev in front of his museum in Nakhchivan 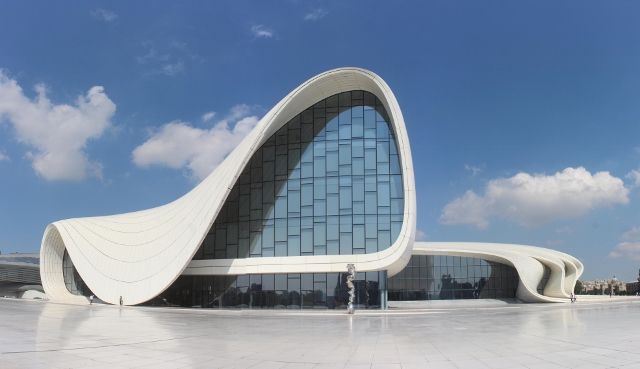 the Haider Aliyev cultural centre in Baku, once more 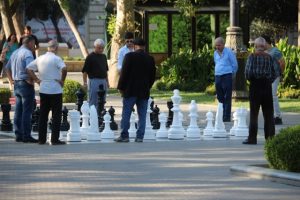 men playng chess in the park

Having said all this – admittedly, a bit of my own speculation, too – the tourist is not restricted in any way. This is a relatively easy country to travel through, with more and more English-speaking people around, and especially away from the standard tourist traps, an extremely nice and helpful population. Comparable with the Kurds in Eastern Turkey, say, or with the Iranians. Which is exactly why I would not have liked to have missed this travel experience: there may not be much to admire in terms of tourist highlights, there are always the Azerbaijani people, who make it so worthwhile. And there is Nakhchivan, of course: surreal.

next: crossing the border into Georgia. Or skip directly to Tbilisi. 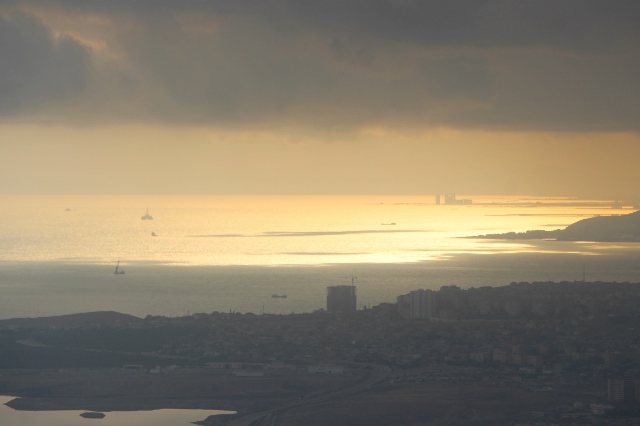 the Caspian Sea, behind Baku