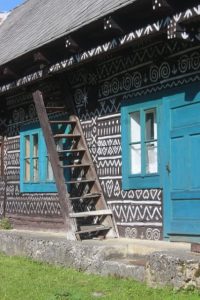 Driving north through the Turiac Valley we come across several towns, where museum visiets are a challenge; contrary to the open-air museum of Cicmany, a unique village with decorated wooden houses. 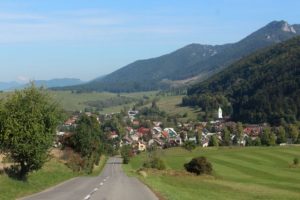 the Turiac Valley, at one of its wider expanses

Today was another one of those days for driving from one place to another, with again a couple of rarities thrown in for good measure. In order to end up in Dolny Kubic, where we had booked our next few nights hotel, we drove up into the Tatra Mountains, through what my 15-year old guidebook called the “progressively narrower and more dramatic” Turiac Valley. Except that quite a bit of the valley is covered by a motorway, nowadays, which does take some of the charm away. an old, but refurbished Turkish bath in Turcianske Teplice 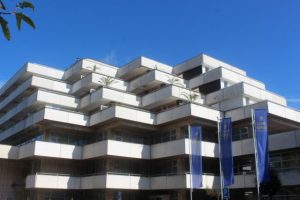 and a rather dated, Communist-era building, a spa hotel, also in Turcianske Teplice

Our first stop was going to be Turcianske Teplice, a town mostly known for its many health spas, and associated hotels. Not that we were interested, we came to see that other claim to fame of the town, the museum dedicated to the painter Mikulas Galanda, who was born here. Having been impressed by Slovak art in the Danubiana, but also by the Czech 20th Century art from an earlier trip, perhaps Slovak art is also something to be explored further. Not on Sunday morning in Turcianske Teplice, though: the museum was closed. And there was not enough in town, not even a spa, that would keep us waiting a couple of hours until it would open, perhaps, in the afternoon. 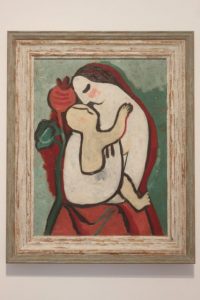 a Mijulas Galanda painting in the Turcianske Gallery, ‘Mother and Baby near Poppy Flower’ (1938, oil on canvas) 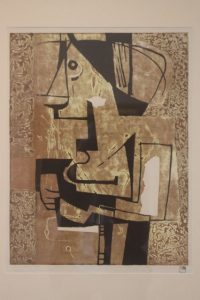 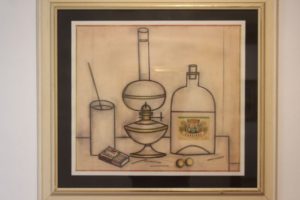 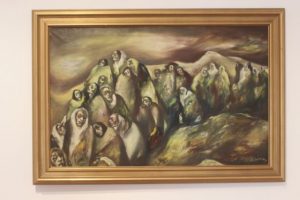 ‘The Refugees’, a painting by Vincent Hloznik (1944, oil on canvas)

There was also no real need. The town of Martin, another one of those communist industrial bulwark-no-more’s, houses a small, but good museum of Slovak modern art, the Turcianske Gallery, which does not only include works of Mikulus Galanda, but also of several other first-rate 20th Century Slovak artists. Having negotiated the vast one-way avenues that make up Martin’s street plan, we managed to find the Gallery, quite a sizeable building, which – importantly – was open. Or so it said. What followed was perhaps the weirdest museum visit we have even experienced. Yes, we could enter, and yes we could pay our tickets. A big metal safe box was produced, and unlocked, from which we received our change. And from which we deducted that there may not have been many other visitors today, yet. Indeed. Next, one of the two men present in the lobby accompanied us to the second floor, where he opened the door to perhaps five or six smallish exhibition rooms. Housing a temporary exhibition of some, wholly uninteresting, local artist. Three minutes later, we outside the rooms again, he locked the doors, and took us one floor down. Opened another few doors, switched on the lights, and there was the permanent collection. Again, five or six rooms only, perhaps 25 or 30 paintings and sculptures in total, but at least a lot nicer work than that from upstairs. Warranting more time, too. And then, that was it. After we were done, lights off, door closed, down to what we thought would be the next exhibition rooms, but no, to the exit. Some 20 minutes later we were outside again. Obviously, not the most popular museum in the country, and why on earth such a large building, it beats me. But a good introduction of 20th Century cream-de-la-cream Slovak artists it was. 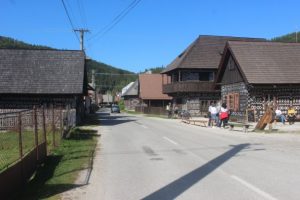 the main street in the village of Cicmany 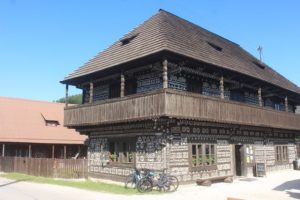 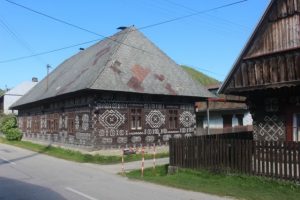 and another house, more likely to be original 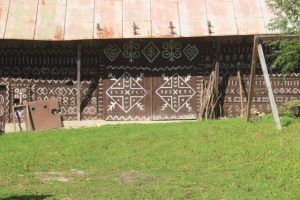 even the walls of the barns are decorated 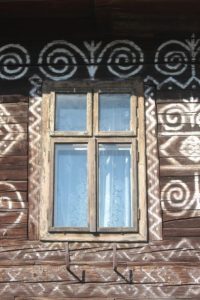 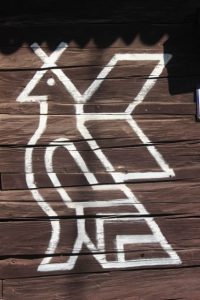 and a rather newer pattern, unlikely to be derived from lace 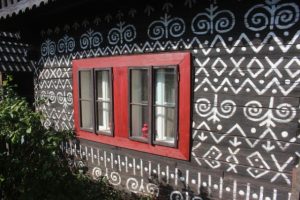 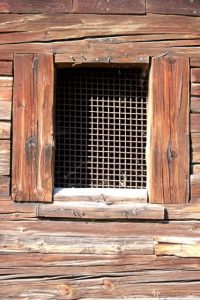 Cicmany then. A bit of a detour, but through beautiful forested mountains alternating with wide green meadows. Autumn colours start showing, carefully. Reaching the village, we immediately knew that this was far more popular than the museum in Martin. Cars parked everywhere, streets clogged with mostly local tourists, on a day out. Cicmany derives its fame from the decoration of their wooden houses. Apparently, some 200 years ago people started to use lime-based paint to preserve damaged wood. And they liked it so much, that they painted their entire houses, with patters from the lace-work that was locally produced. And it must be said: the result is striking. Entire streets with dark-wooden houses are enlivened with bright white decorations, occasionally helped by a window frame painted in a different colour. The houses themselves are also quite nice, although many don’t have wooden shingles on the roofs anymore, but metal sheeting. Whether the villagers are still as enthusiastic as 200 years ago, I am not sure. Although there is a quite a lot of local business in the form of coffee bars and souvenir shops, there is little in terms of Sunday rest, today. But, unique it is!

Next: the Orava region 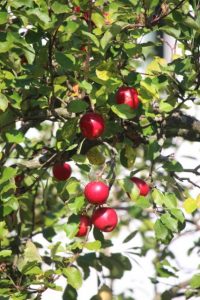 the village is full of apple trees 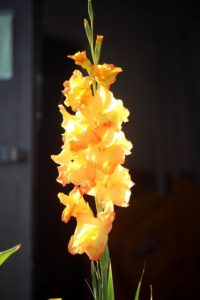 and many people have made an effort to maintain the flowers 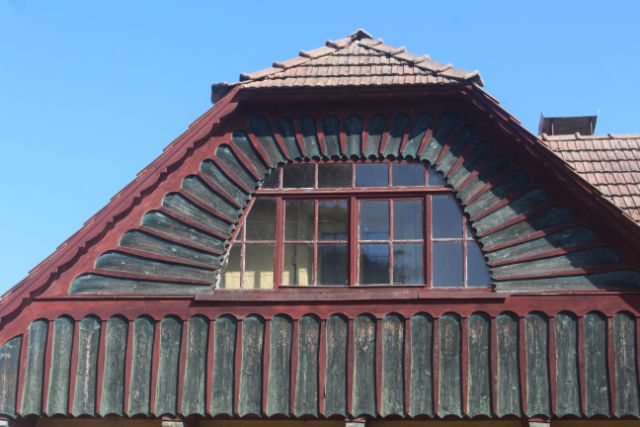 not only the decoration, some of the gables are also fantastic 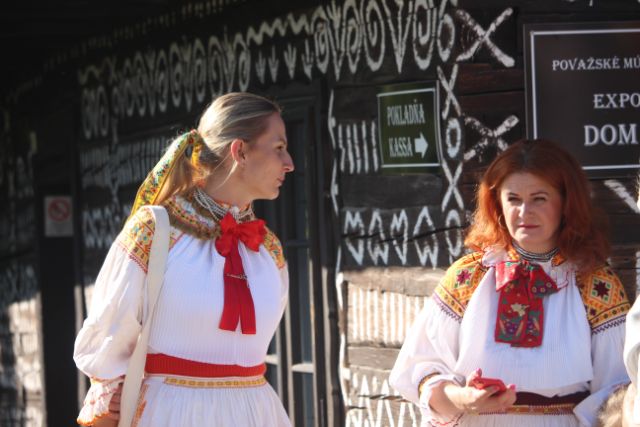 these are two Hungarian women, traditionally dressed, but equally tourist in Cicmany 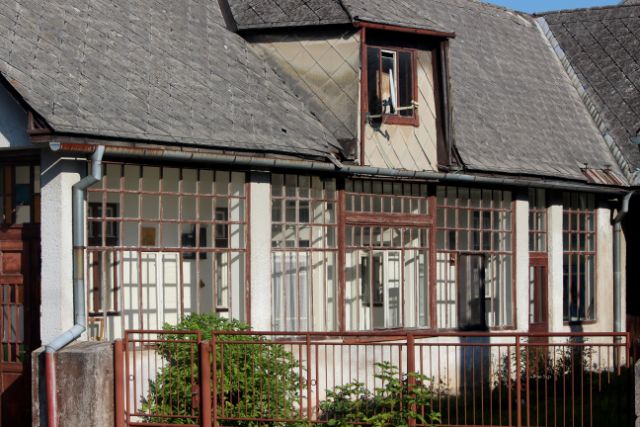 and not all houses are wood, but this one is also impressive