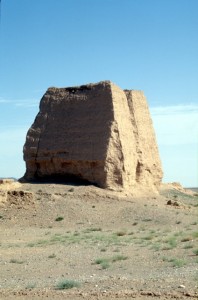 beacon tower near the end of the wall

Jiayaguan sports the end of the Great Wall, or rather the Great Mud Ramp, and it also seems to be the last fortress of Chinese communism.

We were pleased to find ourselves in a deluxe train the next day, on the way to Jiayuguan, our next target. The carriage was adorned with carpets, curtains, and very comfortable chairs, and every so often somebody came along with drinks or food for sale. The scenery became more and more desolate, desert dominated, although occasionally we would still pass a small settlement, where people had managed to cultivate the soil around them. But beyond every green enclave the desert would be back, and the further west we went, the more ferocious the desert looked. Unlike other oases, Jiayuguan announced itself not through green pastures, but through a sudden appearance of factories, bulging the foul smoke again.

An eerie city, very spaciously laid out, with wide avenues. Its expansion probably stems from the fifties or sixties, with rows and rows of low apartment buildings, hardly any traffic, very much as one would imagine the old, communist China. Consumerism hasn’t penetrating here as fast as it did in other parts of the country, and the town seems to suffer from a distinct lack of entrepreneurship. Here no taxi drivers or rickshaw drivers that call out to you to offer their services. Here roads are not lined with stalls selling everything, from vegetables and plastic shoes to grandmothers. An occasional tricycle will sell some peaches, but most of the trading is confined to a well-regulated, and limited market place, where everybody adheres to the rules. Nice, for a change, but after our experiences earlier it is somewhat disturbing to see this docile, uneventful town, seemingly loosing out on the big bonanza. 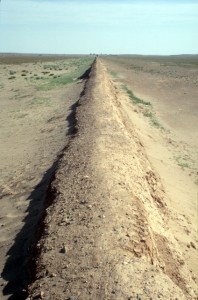 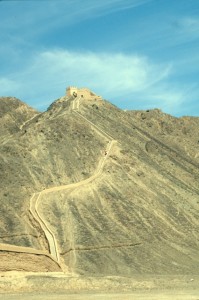 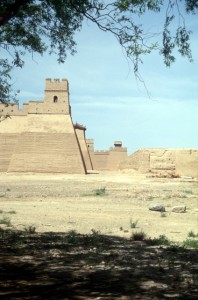 the fort, which looks like a recent addition to Jiayuguan

Jiayuguan has risen to fame because at one stage it represented the westernmost edge of the Chinese Empire. The end of the Great Wall is here, but, as observed earlier, it would be better called the Great Mud Ramp. We dutifully visited the First Beacon Tower, where the wall begins. It is actually a heap of old bricks, but it does have an air of authenticity over it. The setting is beautiful, at the north bank of a mayor river valley that has eroded a deep canyon, and against a backdrop of snow-peaked mountains of the Tibetan Plateau. 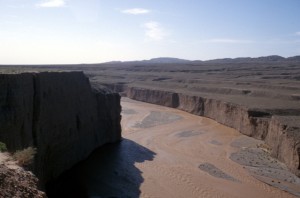 river at the end of the wall

Amazingly, there is nobody to charge an entry fee here, another sign of lack of entrepreneurship. Other sites around Jiayuguan are distinctly less original. The stretch of Great Wall running off into the mountains to the north cannot be more than fifteen years old. We walked all the way to the end, a pretty steep climb, only to find that there is no continuation of the wall, there are no further towers, or even traces of rubble, beyond the end of the tourist trap. Looks like there was no wall to start with, here. The other pillar in Jiayuguan’s wall-craze tourist industry is the fort, claimed to be dating from the 13th century, or so, to defend China from the hordes of barbarians. In its current form it is more likely to date from the 1980’s, and built to attract the barbarians, instead. The fort comes complete with camels and horses, empire dresses and other paraphernalia required in China to have your photograph taken. The only really interesting site was a 1700 year old burial tomb, decorated with beautiful, stylistically painted bricks. Apparently, there are many other tombs like this one, around Jiayuguan, but they have not been excavated yet, only one has been opened to the public. Who knows, is there another archaeological treasure in waiting.

As we were bored in the afternoon, we decided to visit the local department store. Jiayuguan, as I said earlier, must represent the old China. This shop, on the corner of the major town square, was gigantic. It extended over three floors, and lots of merchandise was available, somewhere. Foods, shoes, tools, cloths, photographic equipment, ice skates (it was 40 degrees C, no rink anywhere in sight, and the climate was not likely to change soon), and decorated plastic Christmas trees. But many shelves were empty – or loosely filled, to say the least -, and the store as a whole was very poorly organised. Electric shavers could be bought at three different places on different floors, and Nescafe was differently priced in at least two locations in the same store.

The people in Jiayuguan were, despite its touristic attractions, distinctly less used to foreigners than elsewhere. Not only children, but almost everybody felt compelled to say ‘hello’ and burst out in an uncontrollable giggle. Which is strange given the history of the town, long considered the edge of the empire. For the Chinese on the Silk Road, travelling on from Jiayuguan meant leaving China proper, and entering the uncertain realm of the Gobi Desert and its extension west, the Taklamakan Desert.

Continue: Origins of the Silk Road