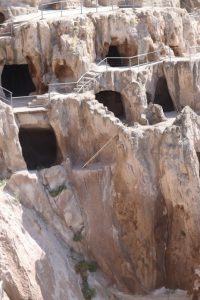 hand-made caves of the Vardzia Monastery

The cave monastery in Vardzia is one of the main attractions in Georgia, not in the least because of the beautiful frescos in the rock-church of the Assumption.

Having come from the coast and the Adjara region, and across the Goderji pass, the countryside has changed dramatically. No more lush green hills, but dry mountains, with only some vegetation in the river valleys. We follow the gorge of the Mtkvari river, on an excellent road. This is where the heavy Turkish trucks come down from Armenia, taking an enormous detour via Batumi to Trabzon, just because the border between Armenia and Turkey has been closed already for many years. Obviously, judging from the many fortresses along the road, this is also a much older trading route. 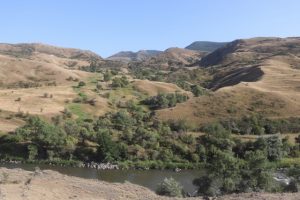 the landscape along the Mtkvari River 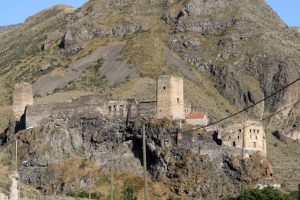 the Khertvisi fortress, well restored, looking out over the valley

A turn-off a little further leads to Vardzia, Georgia’s most important cave city. It was established in the 12th Century by King George III and his daughter, legendary Queen Tamar – whose rare images both feature, together, in the rock church that is part of the complex. The monastery used to house some 2000 monks, but already fairly soon after its construction, it got badly damaged by an earthquake, which destroyed a large part of the sandstones, weakened by the tunneling. Further earthquakes, and Persian and Turkish raids, ultimately forced the abandonment of the monastery in the 16th C. 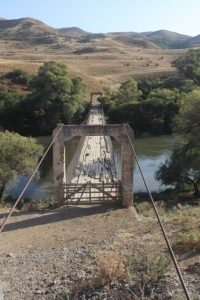 a suspension bridge across the river the Vradzia caves, visible from the distance 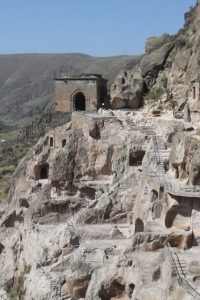 the bell tower, the only building on itself in the complex 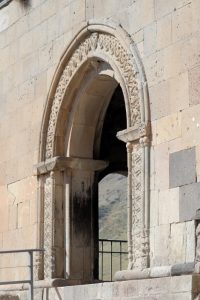 one of the four entrances to the bell tower 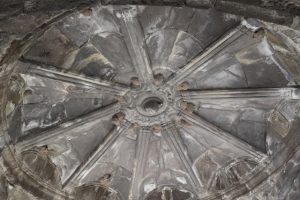 the ceiling inside the bell tower

The caves are visible from afar, as dark spots high up in the mountain side. After a short climb we reach the first chambers, stables for the horses. A path leads further to the bell tower, which is the only structure that was built, not carved out, and then, via a network of stairs – well supported by metal steps and railings, which significantly improves safety from its 12th C origin! – past the many man-made caves to the Church of the Assumption. The church is easily the largest rock-hewn chamber of the complex. It also sit back from the rockface, which means that the broad ledge in front must have been carved out, too. Both the ceiling of the ledge and the inside of the church have been decorated with frescos. 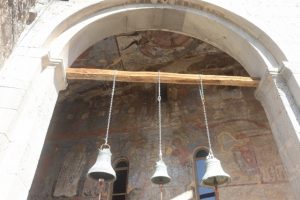 the bells in front of the Church of the Assumption 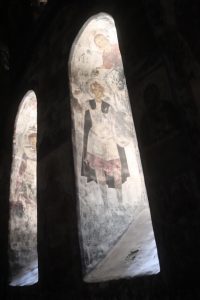 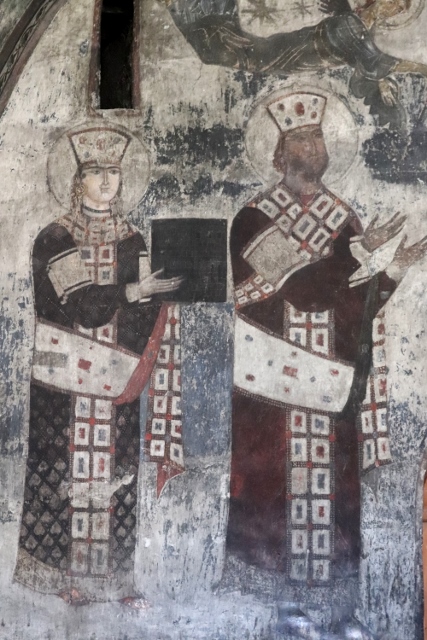 the images of Queen Tamar and King George III 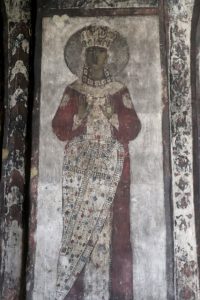 another image, don’t know who this is 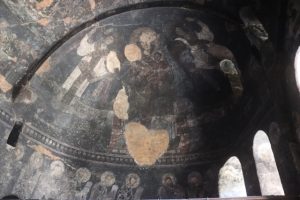 the smoke-blackened cupola of the church 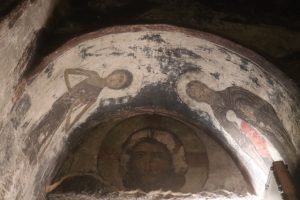 and frescos on the ceiling at the entrance 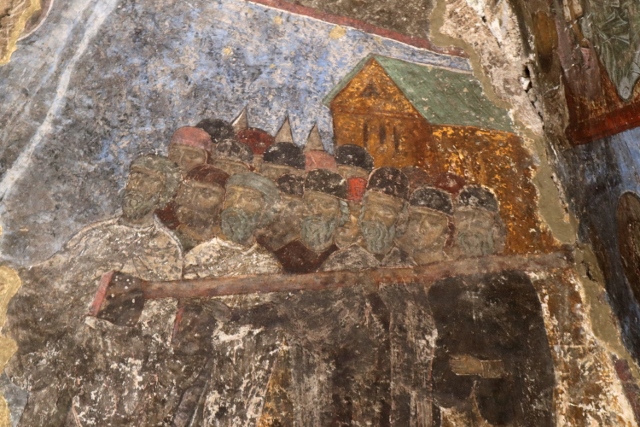 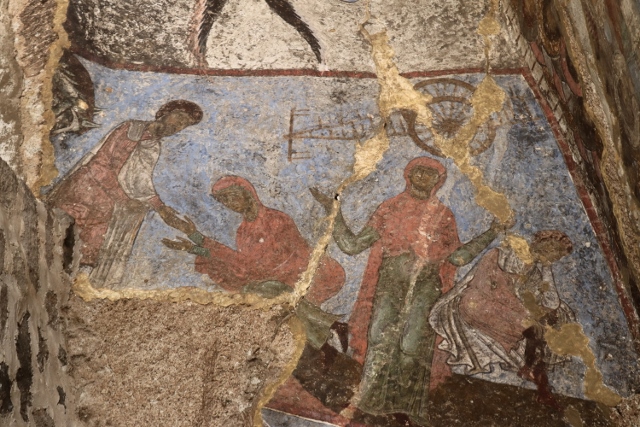 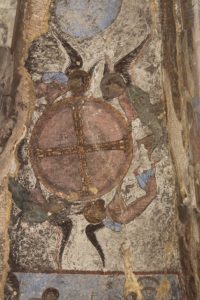 more frescos on the porch ceiling 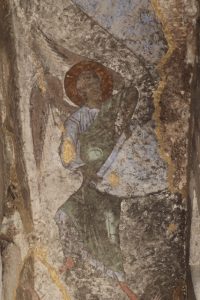 amongst them an arch angel, I am not sure which one 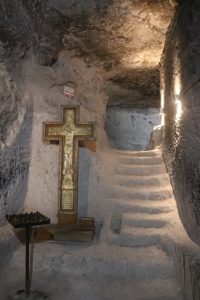 the chapel cave next to the church 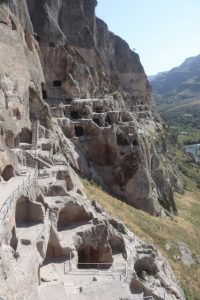 the whole rockface riddled with caves, all well connected nowadays 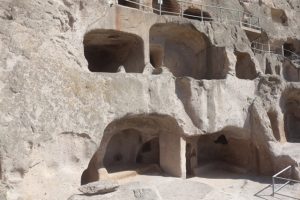 several floors of caves, these ones not internally connected 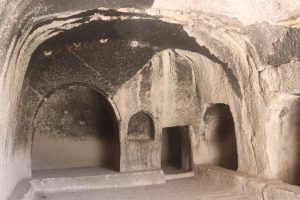 the inside of a cave, with extra niches, perhaps for decorations

We continue beyond the church, further up and down past further caves, some built for domestic purposes, others for storage. From the outside it looks that several also had religious functions, with more decorated entrances and the occasional niche, now empty. We are hoping that there is a way down at the end, so that we don’t have to backtrack all the way to the entrance again. And we are being rewarded for perseverance, because we do find a secret tunnel – signposted ‘secret’ –, and a series of further narrow tunnels and steep stairs, that lead down to the base of the mountain, from where we walk back to the parking. Nice excursion, no doubt a must see in Georgia. But it doesn’t beat other cave complexes like Petra in Jordan, or Lalibela in Ethiopia.

Next: our last destination in Georgia, Gori. 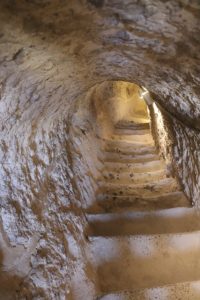 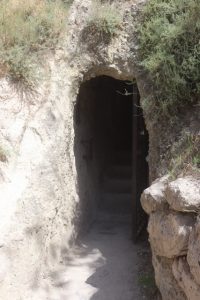 and luckily, the door at the bottom was open! 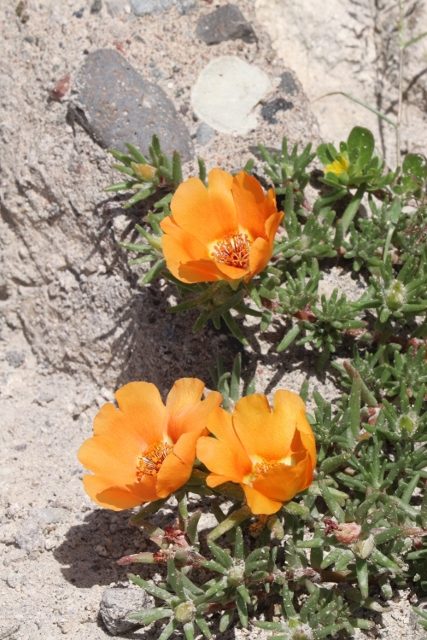 luckily, among the grey caves there is a little colour