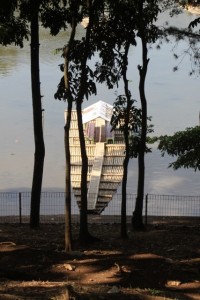 Another thing we did around Garut was visiting a little 8th Century temple, called Candi Cangkuang (candi means temple). Admittedly, we didn’t go for the temple, which is indeed very small, and not very special, but for the setting, on a small island inside a lake, and the transport to the island, on bamboo rafts. You may have noticed that, as a side issue, we have taken an interest in the various ways of transport In Indonesia, and a bamboo raft, that needs to be tried. 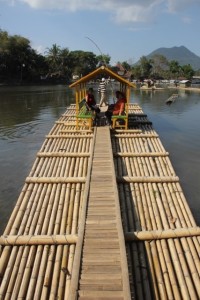 the raft has a re-inforced walkway from front to back, and a little shelter for passengers 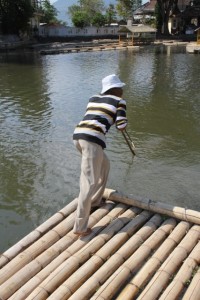 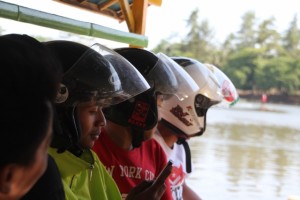 if you come to visit the island and can’t take your motorbike, what do you do with your helmet? Right, you keep it on!

In fact, as so many things in West Java, the crossing is extremely well organized. The bamboo raft is not the unstable contraption of yesteryear – of which I had seen pictures -, but a large, well-constructed raft, with a reinforced walkway from front to back, which passes a small hut where passengers can sit in the shade. And the distance to the island is such, that if you would put five or six of these rafts length-wise together, you could walk. There are many more than five or six rafts, and they continuously go up and down, punted by the boat man. 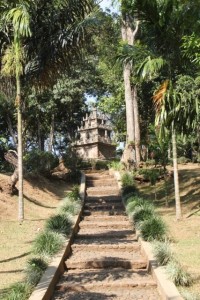 the approach to the temple 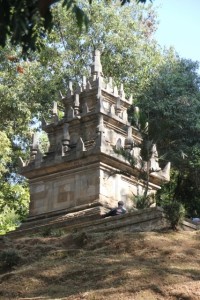 and the temple itself, really small

Yet the experience was what counted. We were the only bule – Indonesian for white man, or foreigner -, which as usual is good for a lot of giggling among the local youth. Also as usual, we ended up in a lot of photographs: when I offered two girls who were taking photos of each other in front of the temple to take a picture of them both, with their telephone, they said, no, no, we want a picture with you in it. And they quickly found somebody else to take it. And once the ice was broken, everybody else also wanted in the picture. 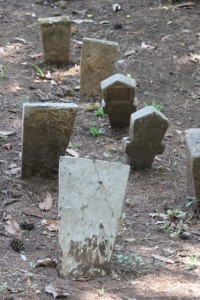 a large part of the island is used as a cemetery 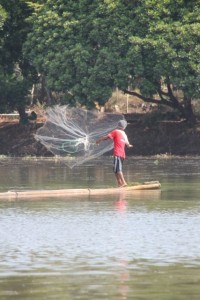 fishing in the lake, surrounding the temple island

We managed to slip away, and walk around the island, which in fact was mostly the local cemetery. Away from the crowds, a very peaceful place.

And then we got back on the bamboo raft, of course.

next: our first stop in Yogyakarta 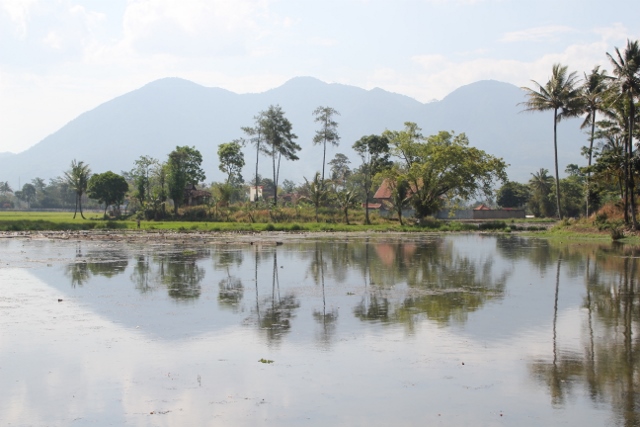 and the view from the raft, quintessential Javanese