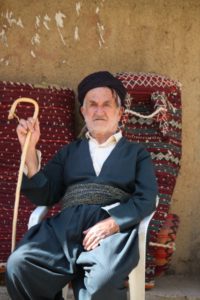 Kurdish man near the village of Howraman-at-Tahkt

West of Sanandaj, the forbidding mountains and steep valleys form a dramatic border zone with Iraq, home to stacked villages, and territory of smugglers and military.

Sanandaj may be the Kurdish capital in Iran, the heart of Kurdish life is in the valleys between Sanandaj and the Iraqi border. Here is a forbidding moutain landscape, by now – mid September – throroughly scorched from the sun; whatever grass is left, is yellow. It is hard to imagine that in spring this area is quite green; it is easier to see that in winter all of this will be solidly white. 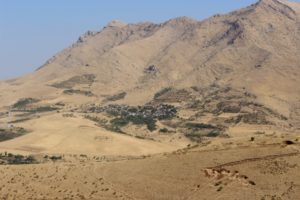 village at the base of the mountains 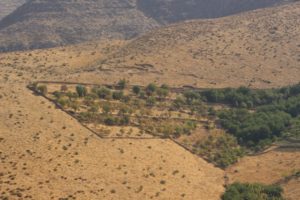 some terracing in an otherwise bare landscape 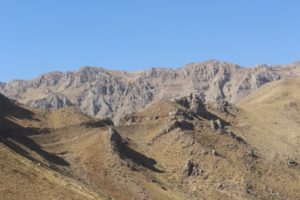 and higher up, there is nothing but rocks and yellow grass

To explore this area, we leave Sanandaj early in the morning, and travel through dramatic landscape, across a first pass. Distant villages hidden in the fold of mountains; around the villages some terracing has been developed, allowing for agriculture; and higher up absolute nothingness, nobody, not even sheep. Down at the other end, we turn into the Howraman Valley, to the village of Howraman-at-Tahkt. In the absence of a decent piece of flat land, the village is, like Palangan earlier, built against the steep slopes. Another impressive view, but in this case hardly ‘special’, because all the villages here, and even the small towns, are like that. 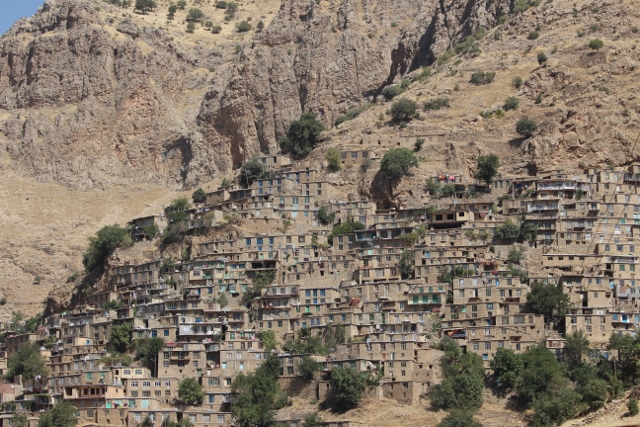 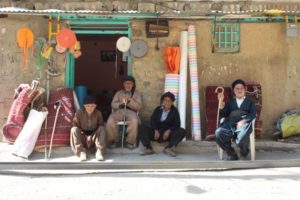 the wise man of the village in front of the carpet shop, of sorts 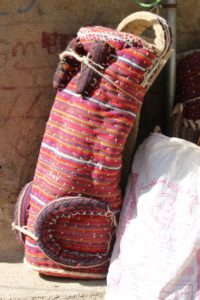 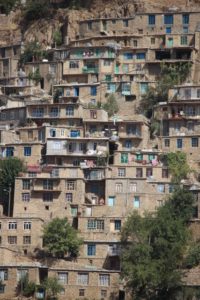 vertically stacked houses of the village 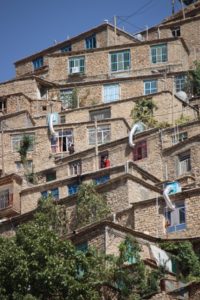 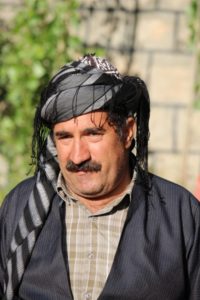 a man in the valley 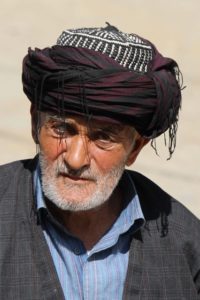 and another one, in the village

Just past Howramat is the Pier Shaliar shrine, in itself not particularly interesting, but onto the shrine and in the trees of the cemetery around, lots of pieces of cloths have been tied. People leave the cloths to make a wish, a habit more related to some animist forms of belief than to Islam, but fact is that the place is very popular for it. 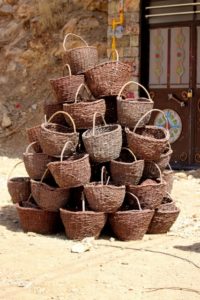 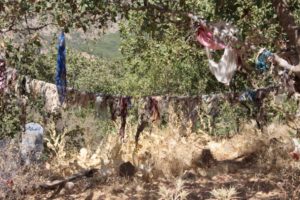 the pieces of cloths near the shrine

Apparently, the most scenic part of the road is from Howramat to Paveh, predominantly hairpins, but unsurfaced. Our taxi driver didn’t want to go that way, and we turned back to the nearest police post – the nearest junction, every junction here has a police and/or military posts associated with it -, to follow the road up to the next pass, and close to the Iraqi border. Some genius had put a kebab restaurant just before the pass, a simple affair with some carpeted benches, but with the most dramatic view I have ever had for lunch. Just across the pass, one looks down into Iraq – which looks quite similar to Iran, from here, but never mind. The only things moving, apart from us, are a couple of donkeys, according to our driver on their way to Iraq to pick up smuggleware. A threesome of pickup trucks are conspicuously parked along the road, allegedly to transport the goods back into Iran, never mind the numerous check points. The other living things, but not moving, are some herds of sheep, anxiously hiding in the little shade there is. 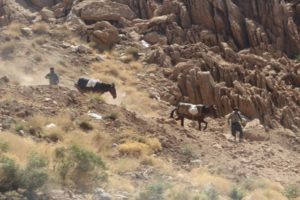 two donkey man on their way, getting the stuff from Iraq 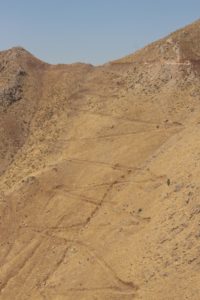 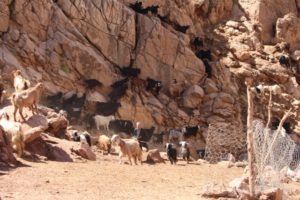 some sheep and goats, trying to find shade 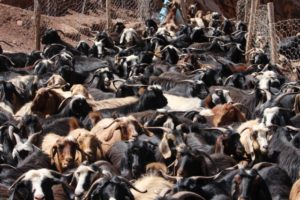 and these have been collected for, I don’t know, kebabs, perhaps? 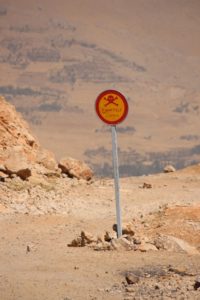 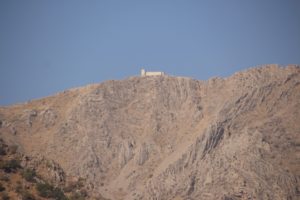 a distant Iranian border defence, high up in the mountains

Kurds everywhere have the feeling that they are being discriminated against by their government, and in Iran that is not different. The resentment comes from a perceived lack of inverstment, as compared to the rest of the country, but the evidence is against them: the roads into the valleys are newly tarmaced, and of remarkably good quality. Whether this is done with the interest of the Kurds in mind, or from a defence perspective – Iran and Iraq have, after all, a history of a not too distant, and rather nasty, armed conflict -, I don’t know, of course. But army posts are visible all along the border, and stone watch towers and small military camps have even been constructed right on the mountain ridges that look down into Iraq. Again, as with the Azerbaijani border, one may question the effectiveness of this, but the effort is certainly impressive. 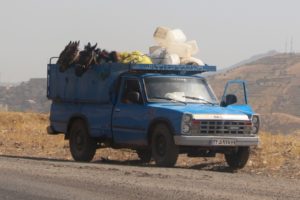 the old Zaymad still, good for any transport job

The road to Paveh splits in a high road and a low road, and we took the low one, via Nodesheh, a small town built equally steeply agains the slope. Following a river valley means that the environment is slightly greener than we have seen so far, also with more agriculture. For Paveh we climb up again, and arrive somewhere half way the afternoon, in yet another town characterised by steep stairs, after a long day’s drive. Worth it, though!