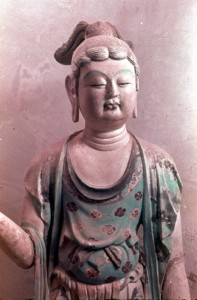 The first 20th century explorers, and the great manuscript robbery.

The last place on the way out for Chinese travelers that could be counted in some way to China, even though it is way beyond the end of the Great Wall – and the first on the way back – is Dunhuang. It is here that the Silk Road bifurcates in a northern and a southern branch, skirting the Taklamakan desert. All travelers left through the Jade Gate, leaving behind what they considered the last traces of civilization, also the relative security, for an uncertain future full of natural and man-made dangers; think of desert sand storms, freezing to death or falling off a cliff in the mountains, or being robbed and killed by bandits anywhere along the trail, never mind the presence of the oases and of the occasional Chinese garrison town to try to protect the trade.

Because of this geography, Dunhuang became the biggest of any Thousand Buddha caves in China, a place where pilgrims and others prayed for safe return, and gave thanks-giving if and when they did come back. Over the years, probably from the 4th century onward until the demise of the Silk Road, people had local artists paint one of the many caves that were hewn out of the rock.

It was here that Sir Aurel Stein, a Hungarian-born and naturalised Brit, and possibly the greatest of the early 20th century explorers of the Taklamakan – or robbers, if you ask the Chinese -, made his most famous discovery.

Ever since rumours had surfaced about buried cities in the desert of Chinese Turkestan at the end of the 19th century, and pottery finds and ancient manuscripts surfaced, Western explorers had set their eyes on this region – inhospitable to get to, for one needed to cross the Himalayas, and inhospitable to stay and travel in, either during the extreme summer heat or the blistering winter cold, and with permanent shortage of water. Apart from several early British and Indian employees of the Indian Survey, mostly concerned with mapping what was then white space, the first to explore the region for ancient treasures was the Swede Sven Hedin, who made a total of three short trips, in February and December of 1895, and in 1899, and who proved not only that ancient buried cities existed, but also that travelling the Taklamakan was in fact possible – although he quite nearly didn’t survive the adventure.

In 1900, right on the heels of Hedin, Aurel Stein made first of several expeditions, with British funding. Stein was, unlike Hedin, an orientalist and archaeologist, and he spent much longer exploring then the geographer Hedin. On his second journey, in 1907, he reached Dunhuang, essentially to briefly see the caves and replenish his supplies before returning back to the desert. However, once in Dunhuang, he was told about a huge collection of manuscripts that were hidden in some of the caves, protected by a self-appointed guardian, the priest Wang. It took Stein several months to get the priest so far to let him examine some of the scrolls, and ultimately to convince him to sell some, and then a few more, and even more, including what is regarded as the first known printed book, to him for the total of 130 Pounds. Stein made off with crates and crates of manuscripts, described by some as an ‘unparalleled archaeological scoop’. Except that the Chinese think differently about this.