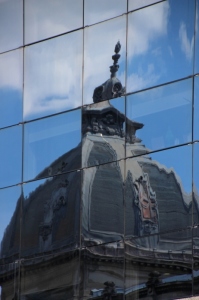 Superficially soulless Bucharest is a place with lots of big and basic concrete, yet also has its isolated gems, and like it or not, a character of its own 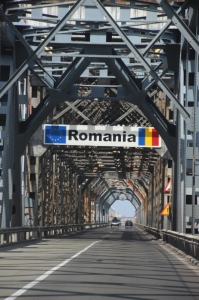 the bridge across the Danube, from Ruse to Giurgiu

Re-entering Romania is somewhat less exciting as our first entry, two weeks ago. Driving through the outskirts of Ruse, we never have the impression that we are heading for a border – but we do, somehow, and we cross the border control. Subsequently, we cross the Danube, by bridge, a rather old, metal-cage, two-lane affair, into Romania. All the way to Bucharest is an uninspiring drive, through flat countryside, nothing to see – even less than there was in Bulgaria. 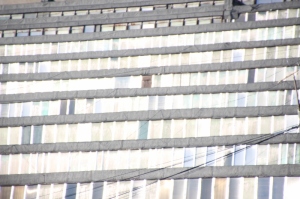 factory windows, from our hotel room

Even when we get to Bucharest, things don’t improve, we are driving through industrial suburbs, positively unattractive; our hotel is somewhere in the outskirts of town. In order to get to the centre we need the metro, which is not particularly well signposted, and not very user-friendly once you have managed to get inside. There is very little information posted – modern trains have Romanian and English electronic information boards inside, but most trains are not modern. Never mind, we are experienced travelers, and we manage to get to where we want to start our exploration of Bucharest, at the Palace of Parliament. 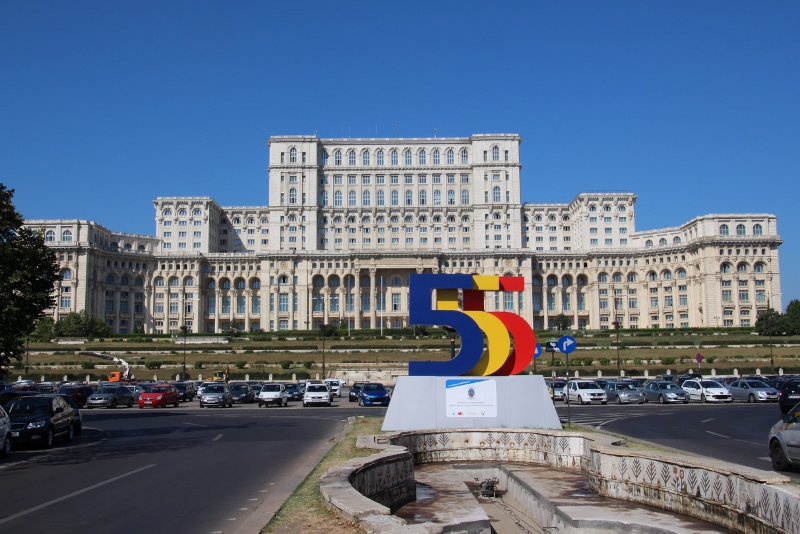 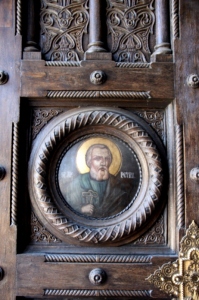 door decoration of the Princess Balasa church in South Bucharest 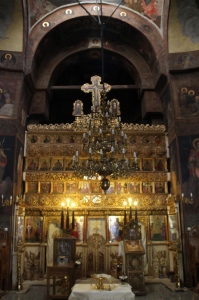 Perhaps this is the wrong start, the Palace is a massive  – far too massive – building constructed in the 1980s, in the southern part of town. Apparently, this is the world’s second-large building, after the Pentagon. Totally misplaced, totally off-putting. Especially once you realize that this part of town has been comprehensively flattened, partly by an earthquake, but much more so by former Romanian strongman Ceausescu’s ideas for a model town, for which many traditional neighbourhoods had to disappear. To be replaced by huge apartment buildings, separated by huge avenues and boulevards. Interestingly, although communist, he didn’t have the courage to pull down some of the most-revered churches in town (although many others did disappear); some have been left in place, concrete housing estates built around them, others, in the way of development, were moved, a few hundred meters or so (!). Total lunacy. So today, the churches, most of them not very big, are actually hidden in between palatis – which are a bit more stylish than the average palati, but palatis, nevertheless. 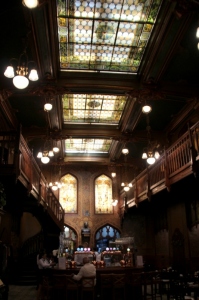 interior of the Caru’cu Bere restaurant, an icon of the Bucharest scene 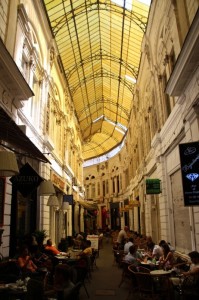 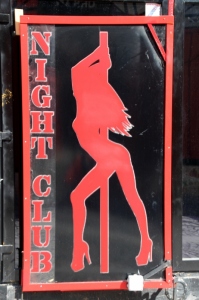 nightclubs all over the place, in the Old Town 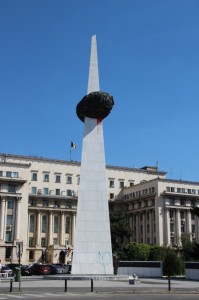 the Rebirth Memorial, monument for those fallen in the 1989 revolution 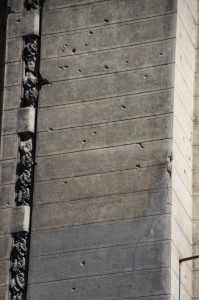 bullet holes in the buildings, also dating back to 1989 (perhaps) the quintesential old and new? – I don’t get this building

And this dualist nature (old church in between modernist development) is a bit the impression we get all over Bucharest, in different ways. The Old Town, which is perhaps a bit over-concentrated on night clubs and brothels, in between the many restaurants, bars and pubs, and a little light on shops, has a number of beautifully restored buildings and covered passages, but also many run-down, graffiti-spoiled, complexes that are close to collapsing, and are really taking the shine off. Piata Revolutiei, one of the big squares in town, is surrounded by some of the most spectacular buildings of Bucharest, the Royal Palace now used as a museum and the Romanian Athenaeum, the concert hall, as well as the most-horrible Communist Party building from where Ceausescu held his last speech, immediately before his spectacular downfall in 1989, and the once elegant, now awful Athenee Palace hotel, Bucharest’s Hilton-operated Grand Hotel. The Herastrau Park is a lovely park, with rose gardens and a lake, as well as well-thought through playing areas for kids, for skate boarders and for grown-ups, but many of the benches are rotten, or incomplete, and the fountains are not working, their ponds empty (and there is, inside the park, a completely misplaced square with the heads of obscure early European Union officials – all men, all totally unknown). Soseaua Kiseleff, in the north of the city, is a beautiful tree-lined, six-lane, traffic-choked boulevard with fabulous early 20th Century villas on one side, and horrible, late 20th Century villas on the other side. 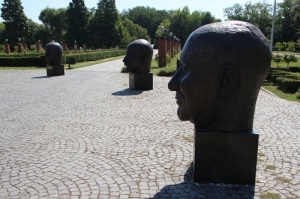 heads of European heads, most unknown to me

The same duality we found back in the people. The preconceived idea of ever-friendly Romanians was severely put to the test in several shops – unhelpful, arrogant shop assistants – and on the roads – aggressive, near-maniac drivers not giving an inch -, yet we meet the most helpful, open, eager-to-talk people, too. An older man in one of the churches, who feels obliged to tell us the history of the church, because according to him there is not sufficient information around. Vlad, in the bookstore, who comes up with a range of books we have to read, and tells us about the lost character of Bucharest, and where we can still find original bits, with patience and imagination. And best of all, the staff of the geological museum – where we hopped in in the hope of understanding some of the Romanian geology, ahead of taking off into the Carpathians – who went out of their way to show us their collection, even opening normally closed room with yet more fossils, minerals and rock samples than they had already on display in the regular section of the museum. Unfortunately, a geological map was missing, for which they apologized, but the reception was fabulous. 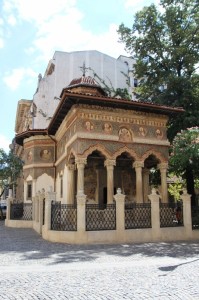 the Stavropoleos Church in the middle of old Bucharest 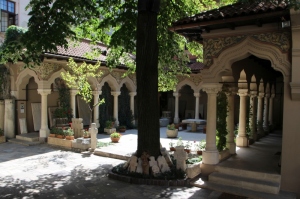 court yard of the Stavropoleos Church 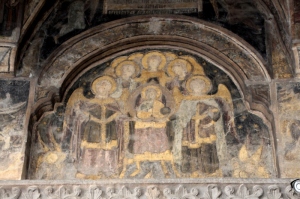 faint fresco above one of the outside doors 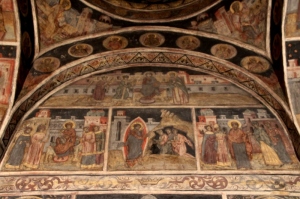 What else to say about Bucharest? Whether you like it or not, it is definitely a city with its own impact, the enormous squares, the wide boulevards, the concrete monstrosities, the amputated elegance. But too much reconstruction may have ripped the city of its soul, and the sleaziness of its Old Town, together with the decrepit nature of many of the buildings there, doesn’t come close to balancing that. Highlights were some of the churches – the Saint Apostle’s Church, the Stravopoleos Church -, their frescoes inside, but they are individual highlights, that don’t carry the city.

No need to linger, I would say. Not sure whether I would come back for more. 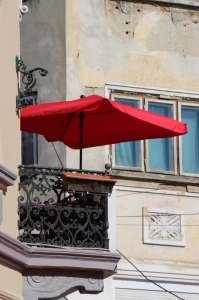 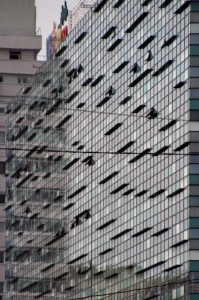