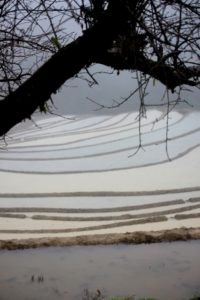 the rice terraces of Yuanyamg

The famous rice terraces of Yuanyamg remained largely invisible thanks to the fog, but ethnic minority women made up a little for the lack of views.

Yuanyang is famous for its endless rice terraces, which attracts lots of Chinese tourists, and, if I may believe several internet-based resources, especially lots of Chinese amateur photographers. In fact, Yuanyang is two towns, the newer Nansha, which is at river level, and the older Xinjie, 30 km further, up the mountain. Nansha is a horrible, modern yet run-down industrial settlement just downstream of a hydroelectric dam, not a particularly attractive place to stay. The rice terraces are, of course, best viewed from high up, but Xinjie, less industrial, is in fact not much more attractive for it, and equally run-down. Still, this is where we based ourselves, with the idea to stay a few days to admire the photogenic scenery. 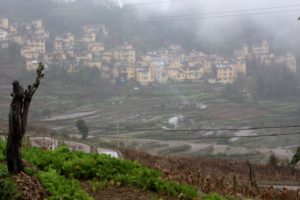 Xinjie, not a very attractive place, despite its terraces

Where we had missed the tourism infrastructure so far, Yuanyang is well organised. There is a fee to be paid by outsiders to the police on entering the scenic drive, there are walks, signposted in English and in French as well as in Chinese, and along the road circuit from where you can see the terraces below several viewing platforms have been installed, all with entry bars that only open after you have paid an additional entry fee. Just to make sure, outside these platforms fences have been erected, so that you are not going to see anything of the rice terraces without having paid up. 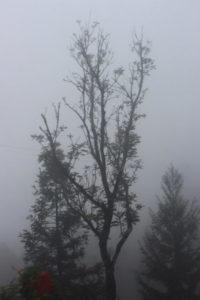 a barely visible tree in the mist 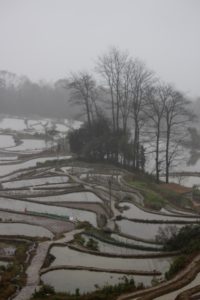 rice terraces, for as far a we could see them 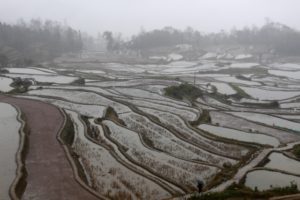 the lower we come, the further we can see 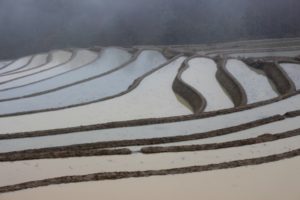 They shouldn’t have bothered. Already, driving up to Xinjie we had spent most time in the clouds, literally, to the extent that we could hardly see the trees on the other side of the road, let alone anything beyond that. In Xinjie we found a driver who knew how to avoid the police checks, and also claimed to know alternative viewing spots. The first one or two of those still allowed us a spooky overview of the terraces, quickly disappearing in the grey, misty distance. Walking down from the road for a while, each bend in the well-surfaced but muddy path we followed provided us with more, and even wider, spectres of terraces – until the fog moved in, and all visibility was gone. Gone for the rest of the day, and the next two hours driving, or so, were either through, or above the clouds. Even the official platforms had been abandoned; clearly nobody expected any change in circumstances anymore. Not a Chinese photographer in sight. Back in Xinjie, it rained. Non-stop. We are just not very lucky on this trip. 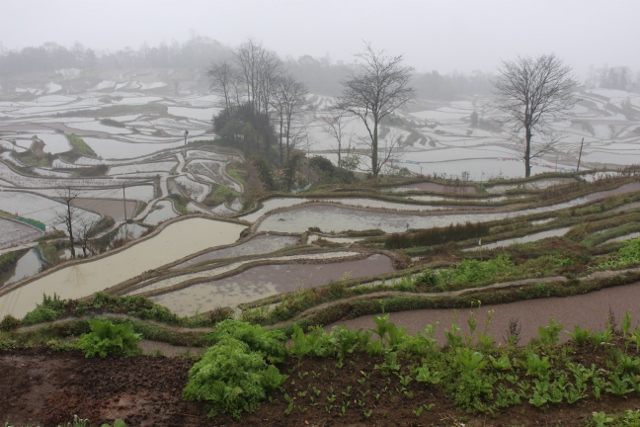 the best overview we got, just before the mist moved in 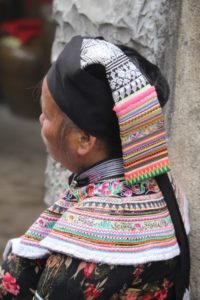 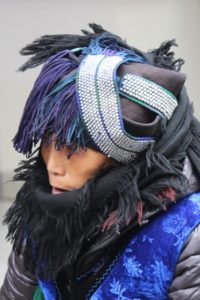 and another one – other minority 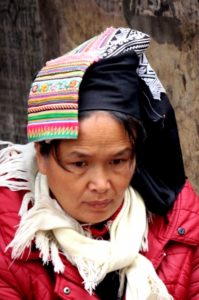 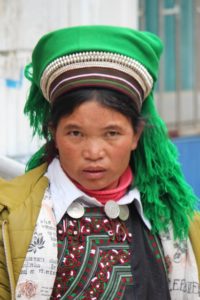 another type of headdress 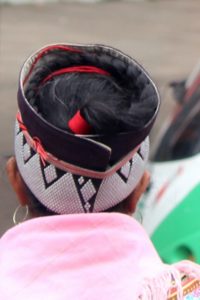 and this one, open at the top 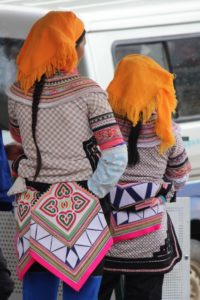 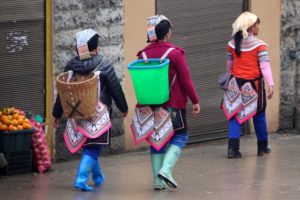 three of the dominant minority

Having said so, an unexpected surprise was that many of the women, old and also the younger ones, were wearing their ethnic minority dresses, far more than we had seen earlier in Xishuangbanna, and far more elaborate, too. Beautifully embroidered tunics, complete with headdresses and backside covers – I have no other name for those -, and even matching trousers. Never mind that part of the dress was often covered by modern-day winter jackets or rain coats. These people are not stupid, of course (whilst I, well, I picked up a bad cold).

Next morning it appeared to clear up, a little, at least in Xinjie. But soon after, even before we could have made arrangements to try again, the clouds moved in. Visibility back to zero. Were we going to spend another day in miserable Xinjie, in the cold, in the rain? Not really. We picked up the first available bus, and left. Back down again, through the clouds. 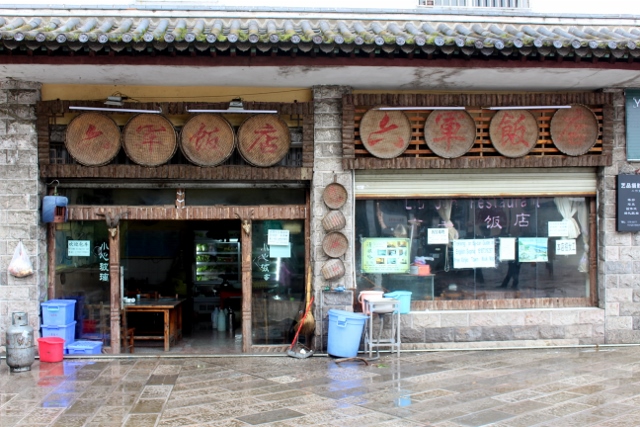 one of the Xinjie restaurants

One Response to 16. Yuanyang