16. the Spis region Saris Museum of Icons in Bardejov 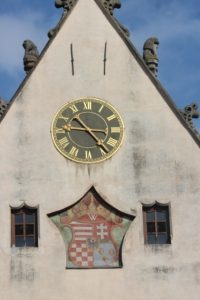 the coat of arms and a clock, on the facade of the town hall

The medieval town of Bardejov is a great place to use as a base for further wooden church exploration; it even has its own museum, with icons that come from those churches. 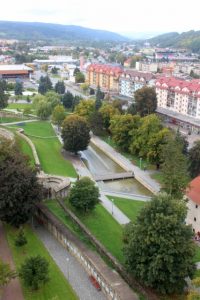 the park, just outside the walls 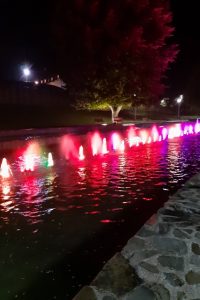 with the coloured fountain dancing on classical music 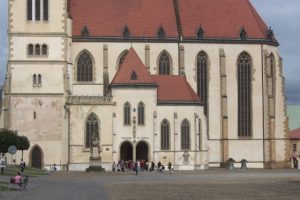 the church, just before mass 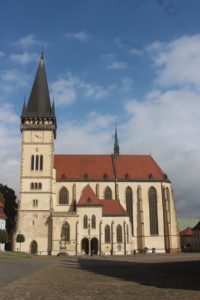 the Gothic church at the town square in Bardejov 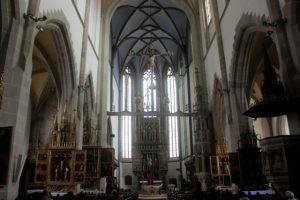 inside the church, note the many side altars 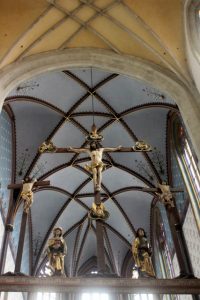 crucefixtion, high up in the cupola 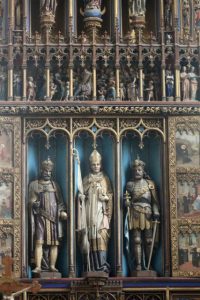 decoration of the main altar 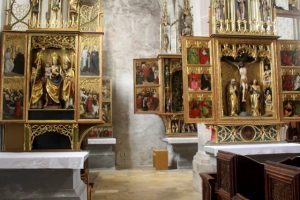 these are the side altars, painted on two sides so they can be closed

We have discovered another real gem in Slovakia. Having moved ever further east, and north, we have arrived in Bardejov, not far from the Polish border. This is a lovely town, with ancient walls tastefully restored, including several bastions on the wall. Immediately outside the old town, as part of attractive landscape design, there is a spacious park and even a fountain illuminated by coloured lights, dancing on classical music – not even in Bratislava have we seen such a thing! Perhaps here public money is actually used for things public?

The biggest attraction, though, is the nicely patched up Medieval stare mesto – main square. On one side is the huge Gothic basilica, which contains a whole range of 15th Century side altars, the ones that can be closed and have been painted on two sides. An old wooden door leads to narrow stairs into the tower and to an outside balcony, from where we have a brilliant view over town, and especially over the square. 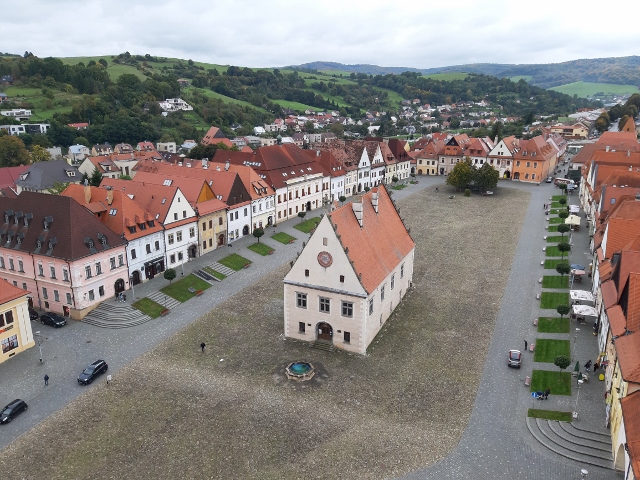 the impressive view of the square, from above 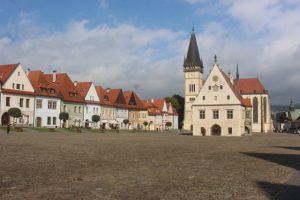 another view of the town square 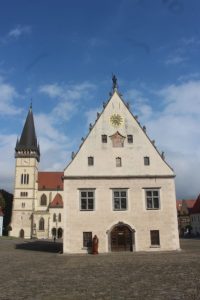 the town hall, middle of the square 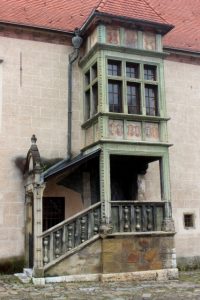 the entrance to the town hall 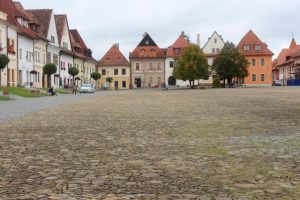 more of the square, cobbled and empty 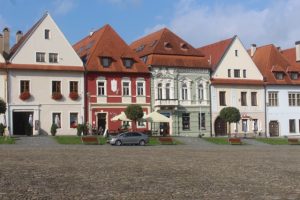 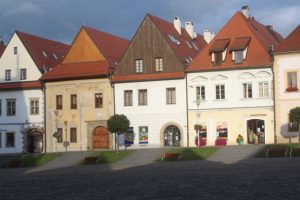 the other side of the square 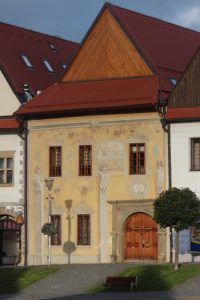 Back down we look at the square in detail, many beautifully restored houses in pastel colours, some decorated with paintings, or stucco. In the middle of the square is the townhall, distinctly German in origin, and testimony to the large Saxon influx this area, too, experienced in the Middle Ages. (Which, like in many Spis towns, created a problem when, during the war, the Jewish population was led away, and murdered, whilst immediately after the war, the people of German origin were expelled.) 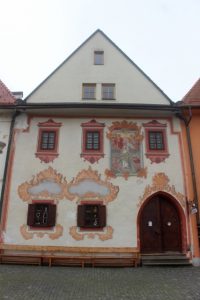 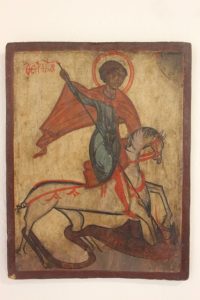 icon of Saint Theodore the Stratilatis (?), from the wooden church of Hunkovce 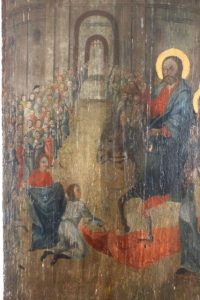 Christ enters into Jerusalem, with a perspective quite unusual in icons (18th Century) 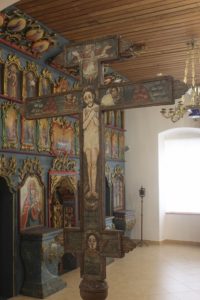 the museum also contains an entire iconostasis, as well as an old wooden cross, entirely decorated

And at the other end of the square, the Icons museum. This touches on one of the main reasons to come this far, the wooden churches (more wooden churches!) of Ruthenia. Ruthenia, or the Rusyn region, is yet another non-administrative, but ethnically determined region, this one originally covering parts of Poland, Czech Republic, Slovakia and Romania, with the largest part in Ukraine. The Rusyns, historically a hill-dwelling peasant population, speak their own language, Rusyn, and more importantly, they had their own church, Greek-Catholic. Indeed, a church linked to the Roman Catholic church, but with all the hallmarks of the Eastern Orthodox church. Icons, for instance. Of which the museum in Bardejov has a fabulous collection, from 16th Century onwards, many of them taken from the small churches in the surroundings, for preservation and protection. I wouldn’t have icons at home, but I do like their intricate details and artistic quality, or sometimes the lack thereof – getting the proportions completely wrong, for instance. There is more on the museum here. 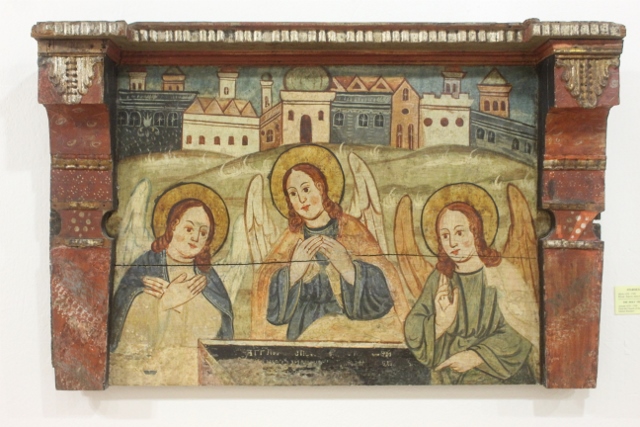 a 17th Century fresco, the Holy Trinity of the Old Testament, in the museum 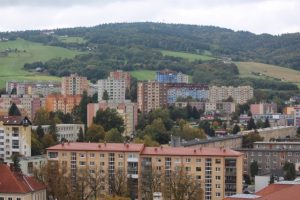 of course, outside the old centre one find back the old monoblocks

The local tourist information office is extremely well organised. They have  a map of the wooden churches in the area around Bardejov, and because they know just as well as we do, that it is sometimes difficult to find the key to the churches, they have included contact telephone numbers on the map. This cannot go wrong anymore! Let’s explore the wooden churches!