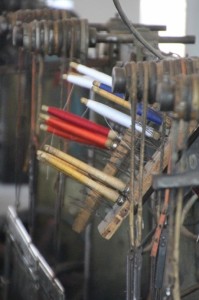 The silk capital of the Fergana Valley, Margilan is a friendly, colourful town where one can easily spend hours in the various bazaars

Margilan, close to Fergana, is a much older town, a trading stop on the Silk Road and a centre of silk production in its own right already in the 9the Century. Silk remained a dominant product throughout the Soviet years, when hundreds of thousands of parachutes were produced here, in addition to lots of other silks, and even now, according to one of our local sources, some 70% of the 200,000 population is involved in one way or another in the silk industry, mostly by weaving at home. 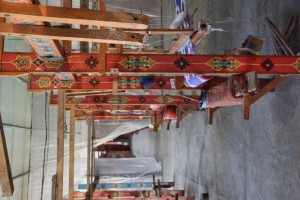 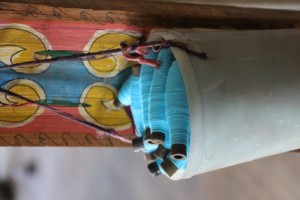 blue silk thread waiting to be used for weaving 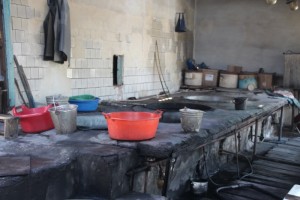 the dying room in the Yodgorlok Silk factory 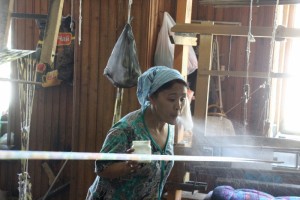 one of the weavers spreaying starch across the weaving, part of the process 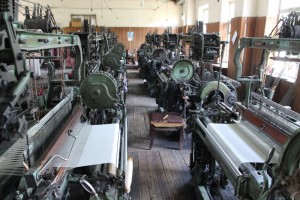 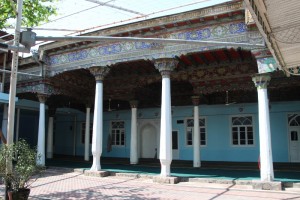 the praying area of the Toron mosque 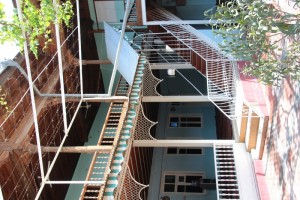 inside the courtyard of the Toron mosque 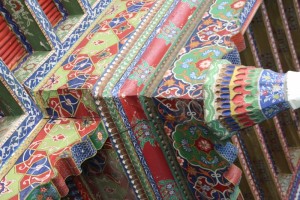 ceiling decorations inside the mosque

Most of the production of silk products is industrialised, of course – well, apart from growing the silk worms themselves -, but one factory, the Yodgorlik Silk Factory, prides itself for working the entire process manually, from unwinding the silk worm cocoons to the design of carpets, the natural dying of the threads, and the weaving on hand looms. They do have a couple of machines – bought from the now-bankrupt parachute factory, and quite ancient themselves -, which produce an enormous noise when switched on, and weave about four times as fast as an experienced weaver. We were shown around the factory, an altogether entertaining tour, especially since I had just read Christopher Alexander’s book “A Carpet Ride to Khiva” (highly recommended, see the literature list).

Being an older town, Margilan also has a couple of attractive mosques, one of which, the Toron Mosque, was open to us infidels, as well. In fact, the care taker was, once again, enormously welcoming, and showed us the intricately carved and painted pillars and ceiling of the outdoor praying area. 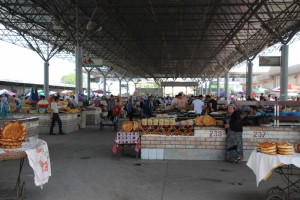 an overview of the central bazaar 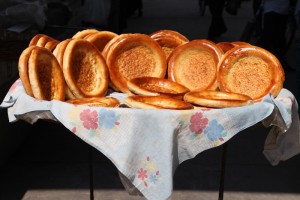 bread is an important element in the Uzbek diet 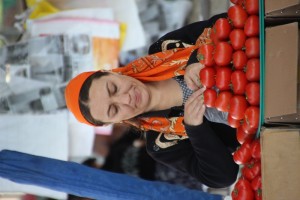 to add a bit of colour, tomato sales woman 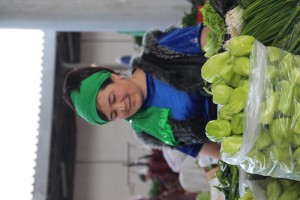 and another colour, peppers sales woman

But all of this pales in comparison to the main reason to come to Margilan, the bazaar. Initially, we focused on what is called the Central Bazaar, not surprisingly located in the middle of town. Once again, mostly business is conducted under a large metal roof, like in Tashkent and Samarkand, and once again, fairly well organised. Here people are even friendlier than we have encountered before, and very relaxed; everybody is in for a chat – as far as we manage, with the language barrier, but football, for instance, is universally understood, and it helps that we come from Argentina and Holland -, men need to shake hands, and many of the sellers won’t let you leave without having made you try their products, some sweet cookies, or nuts, or strawberries, or sugar crystals, or raisins and sultanas (after our latest wine testing, we wholeheartedly encourage Uzbek grapes being turned into raisins and sultanas). 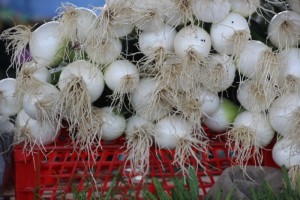 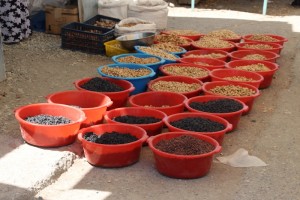 the raisins and sultanas, and various nuts

Then it transpires that outside town, in Kumtepa, a short minibus ride away, is an even bigger bazaar, “you need at least two days to see it all”. Well, we limit ourselves to two hours, in this more rural, and far more chaotic environment, but we could easily have lost ourselves for many hours more. Eating more raisins and sultanas. 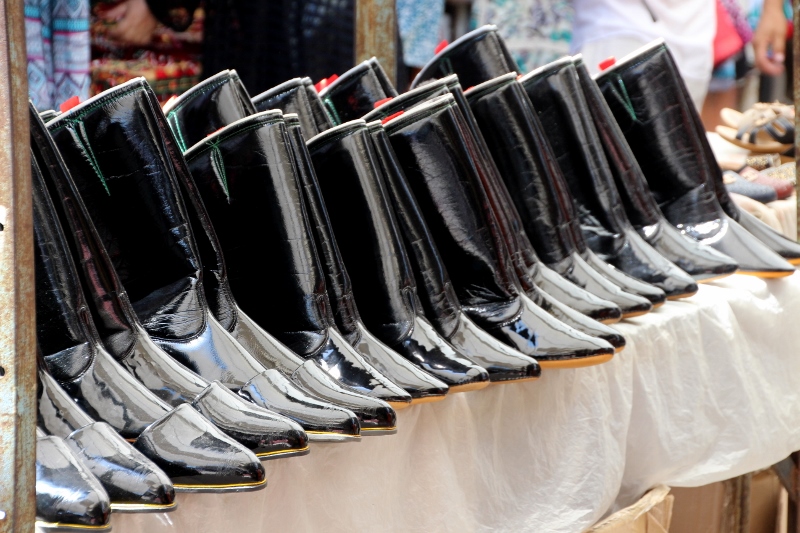 it is not all food, in the bazaar 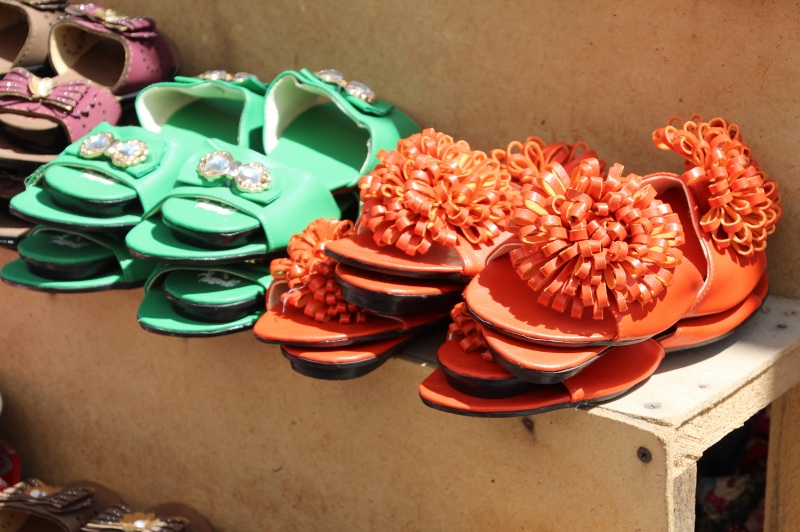 there is equal attention for the foot 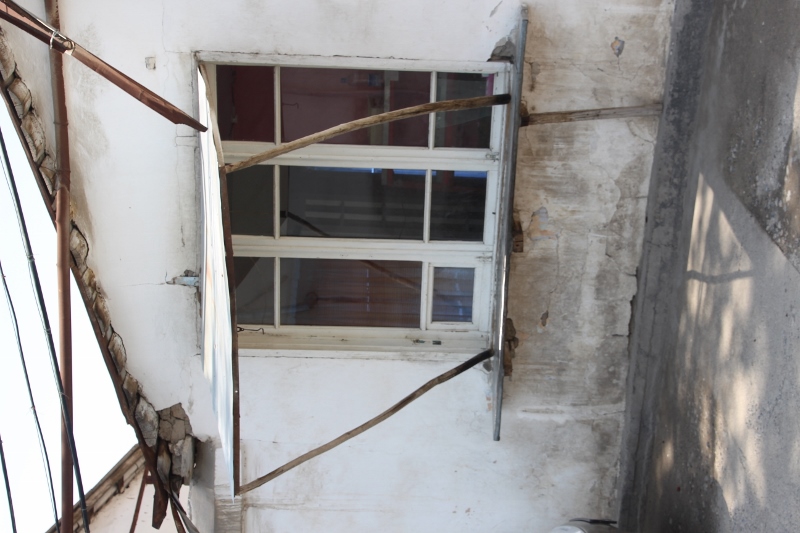 a shop window in the old part of Margilan