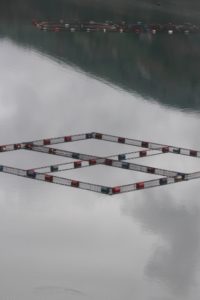 fish farm equipment in a lake on the way to Vietnam

Even the last part, driving through China to the Vietnamese border, is more of an effort than expected, but not unattractive.

Having completed our China plans, even though not always as spectacular as we had anticipated, not always as successful as we had hoped, it was time to move on to our next destination on this trip, Vietnam. From Xinjie we picked up a direct bus to Hekou, where one can cross to Vietnamese border town of Lao Cai. First one hour down to Nansha, then another two-three hours to Hekou. Piece of cake, really. 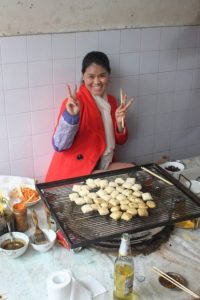 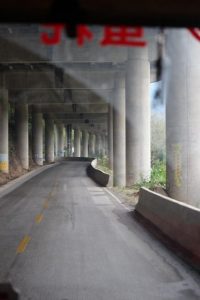 the most frustrating thing: driving under the motorway, instead of on.

That it took a little longer to Nansha, well, that can happen. And that the bus than waited almost an hour in Nansha, well, that just gave us time to have a little lunch (roasted tofu, with a spicy dip sauce, in a small restaurant run by a woman in black leather hot pants, black tights, knee-high black boots and a bright red coat – not your most likely outfit for a cook). But that the bus subsequently avoided the fast, modern highway, and took the secondary road instead, thereby taking nearer to five hours as opposed to the expected two to three, that was just one more of those unfortunate, frustrating moments this trip seems to be full of. 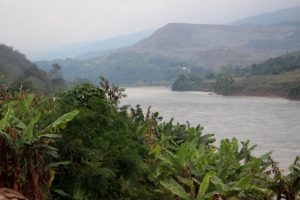 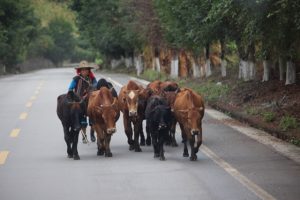 some of the traffic on the secondary road 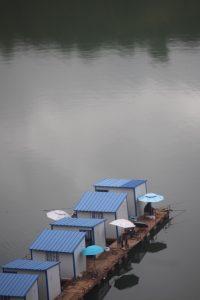 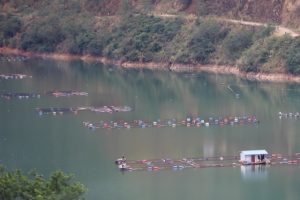 the fish farms in the lake 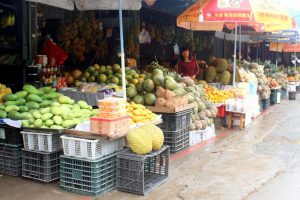 exotic fruit market, from durians and pineapples to papayas and jackfruit 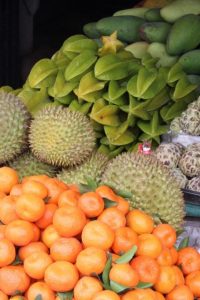 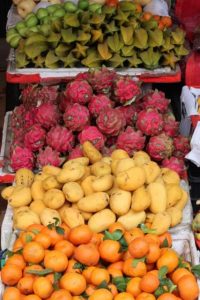 At least we were rewarded with attractive landscape, the road following what I think is the Black River, which extends into Vietnam. The river is interrupted by several dams, creating lakes behind them, used for extensive fish farming. The banks of the river, and the mountain slopes, are full of banana and papaya trees, and many more fruits, as a local market where we stop for lunch demonstrates. Several military police posts – indicating that we indeed get nearer to the border – slow our progress further, because of the need to note down our details, meticulously by hand on a long list of earlier foreigners who have passed here, even though the soldiers mostly have no idea what they write down (my name, in one case, is Netherlands). One of them, credit where credit is due, actually realises that it is my travel companion’s birthday today – but thus imagine the amount of detail that is being collected. 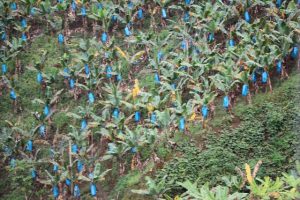 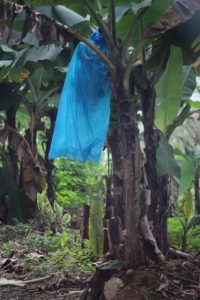 bananas prtotected against the cold

Once we arrive in Hekou, Chinese efficiency takes over again. A taxi is waiting at the bus stop, and speeds us to the actual border crossing at the other end of town, where a money changer helps us off our remaining Chinese currency – turned into Vietnamese Dong, we are instant millionaires. We whisk through customs, the Chinese officers only briefly moaning about our earlier, and clearly suspicious, Iran and Uzbekistan visas. On the other side of the bridge, Vietnamese customs needs even less time, and five minutes later we sip a fruit juice on a terrace inside Vietnam. Where it is an hour earlier. You see, so you lose a few hours, and so you gain one back.

The sun is even shining.

next: an intermezzo to review the China experience, or move directly to Sapa in Vietnam.