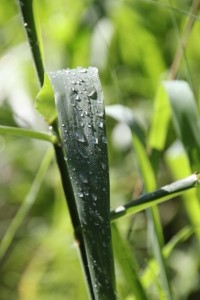 just a pretty picture of dew on a leave, to start this entry with

Perhaps it wasn’t our day, but the Dieng Plateau was not as spectacular as we had expected, in fact, it was hugely over-developed.

The expectations were high for the Dieng Plateau, reason that we went out of our way to get here. Various sites and guidebooks speak lofty about “spectacular landscapes” and “beautiful settings”, and the promise of bubbling mud pools, craters with steaming sulphur smoke, emerald green lakes and some of the oldest Buddhist temples in Java must be enough to draw the most skeptical tourist to this volcanic plateau. Well, maybe. Apparently, the plateau used to be riddles with temples, more than 400 of them, all 8th and 9th Century, but there are only eight left. And they are rather humble constructions, so to speak, on par with the one we encountered near Garut, rather than with the Borobudur. But that still leaves emerald green lakes and steaming craters.

I had thought, from the descriptions, that we would be walking across the plateau, finding a path here, a track there, to reach the sites. And when the bus driver – the bus that had picked us up at the Wonosobo bus stop! – offered to interrupt his schedule, and drive us around to visit the sites, I thought he was confused. Or somehow our communication in Bahasa Indonesia had broken down. You couldn’t drive to the sites! I was wrong, it was me who was ignorant and naive. All the sites are actually connected by tarmac roads, and well sign-posted. Any site that has a tarmac road going to it, means that cars and motorbikes – and busses – can easily reach it, and thus that Indonesians can easily flock to it. Which turns the site into a tourist trap, complete with horses to sit on to have your picture taken; funnily dressed people, in warrior costume, angry bird costume or other totally irrelevant dress-up, to enlighten your photographs, too; and lots of Indonesian youths who at the sight of a bule – a foreigner – instantly loose interest in the reason they came here  for, and cannot think of anything funnier than shout “hello mister” and “what’s your name” in between uncontrollable giggles – the larger the group, the worse. 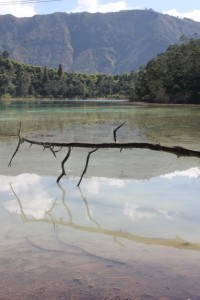 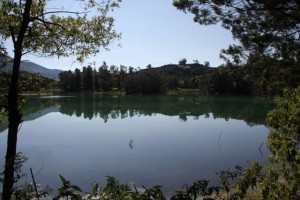 another view of the lake, picture-perfect and peaceful…

At first it didn’t seem too bad. We arrived at the famous lake, but the gate was closed – every site is developed to the extent that it has been fenced off, and you only get in through a formal entrance, with ticket booth. Well, mostly, since this one was closed we actually managed to squeeze in between fence and wall, and entered the compound, illegally! The lake lay in front of us, and admittedly was very beautiful. So we walked around, and around a second lake, a peaceful half an hour stroll without meeting anybody except the odd farmer – and the odd motorbike -, only to find that the official entrance had been further down the road – where is was indeed teeming with Indonesian youths in a radius of five minutes-walk from the entrance. 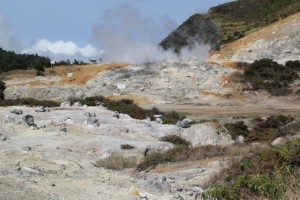 Next on the circuit was a temple, which was closed because it was being restored, and then the steaming crater with bubbling mud pools was awaiting us. Here no funnily dressed people, no, to enlighten your photos you can rent a motorbike, drive to the crater and have some of your friends take a picture of you, with steam behind you. And drive around, and again, and again. And the noise! Mind you, the small crater is real enough, the sulphur steam, and its smell, omnipresent, the mud is bubbling – around the many plastic bottles that have been thrown in the mud pool. It is just that the setting, the entourage, isn’t what one would expect – nothing like Papandayan, for instance. 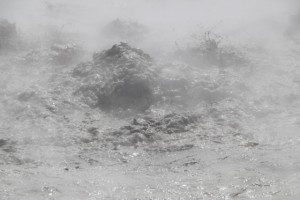 violently bubbling mud pool in the center of the crater 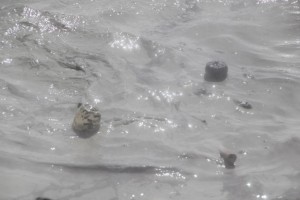 and the inevitable rubbish – plastic bottles- in the mud pool 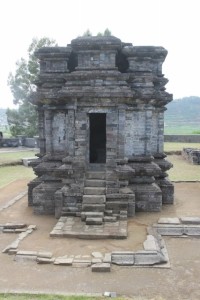 one of the smaller temples, Candi Gatutkaca 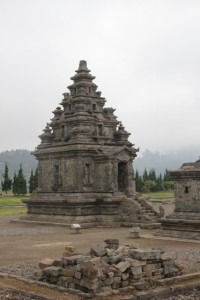 and the main temple in the Candi Arjuna complex 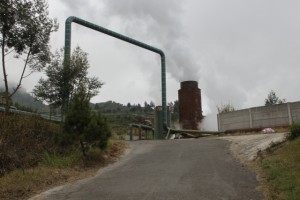 pipes and geothermal installations dominate much of the landscape

We walked on to a couple of temples, part of the tourist route, and then we tried some other roads, to get away from the standard circuit and finally enjoy some of that spectacular landscape. Which wasn’t that spectacular, really, and was dominated by large pipes that tap geothermal energy from some of the other craters. The weather was closing in. Time to head back. An illusion poorer, but an experience richer.

next: more temples and volcanos in Bandungan 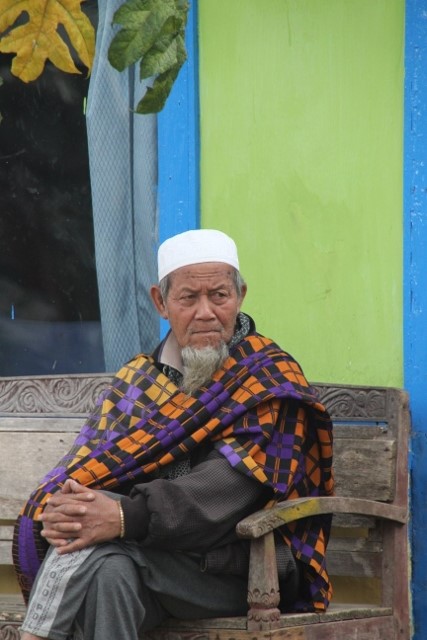 one of the plateau inhabitants has seen it all before