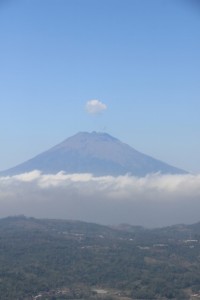 Another developed tourist spot around Hindu temples, but with the most amazing volcano views.

Bandungan was, and I suppose still is, a hill station away from simmering Semarang, at the north coast of Java. We came from the other side, of course, from Wonosobo, so never made it to the real heat of the coast. The place is teeming with hotels, but many a little seedy. Interestingly, when we booked our room, via the booking site Agoda, only one hotel showed up, which turned out to be an almost empty government-type of hotel. Eerie atmosphere of abandonment; large pool, with water, but only one deck chair, half broken. Karaoke is on offer everywhere – except our hotel – and as it was a public holiday, we were treated from afternoon to late night. 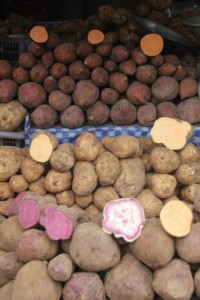 sweet potatos in the Bandungan market 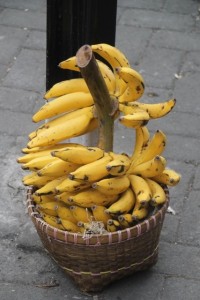 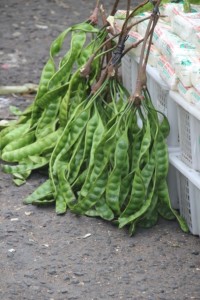 and what they call stinking green beans, officially petai beans

The village itself is somewhat chaotic; a permanent traffic jam around a market that spilled onto the road – which thus caused at least part of the traffic jam. 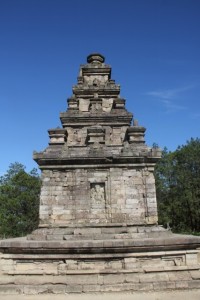 one of the temples, in a beautiful setting 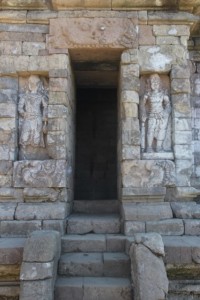 the entrance of one of the temples 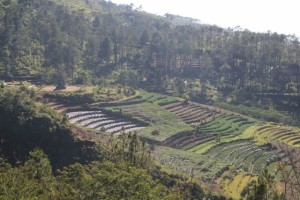 the slopes in between the temples are used for agriculture

We had come here to visit Gedong Songo, which means ‘nine buildings’ in the local language. The buildings refer to a series of small temples – in fact quite a few more than nine, but nine is an auspicious number – located up the lower slopes of a mountain range, Gunung Ungaran. We decided to go early, to best appreciate the views, so early that there didn’t seem to be any ankhots – mini busses – yet, but luckily a very nice man with a pick up stopped, and gave us a lift. He proudly told us he had participated in the karaoke, last night, after which I thought him a lot less nice, but he dropped us at the entry gate of the temple complex. Once again the description, of steep mountain paths, and a trail leading down to hot sulphur springs, turned out to be more adventurous than the reality. Like the Dieng Plateau, this place is also utterly developed. The mountain path and the trail are actually well laid out stone paths, including steps where it becomes steeper, and the hot sulphur spring is a well-developed pool, with changing rooms and showers, where spring water is collected. The pool was closed, although a group of Indonesian punks had managed to get in – we didn’t, we didn’t try. 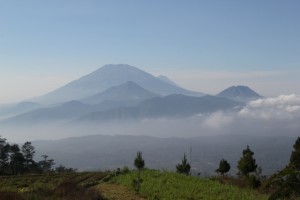 Gunung Merbabu, and probably Merpati behind it 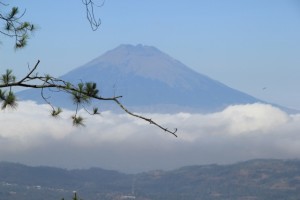 The temples are not very impressive, although they are nicely enough set against the mountain slopes. The real reason to come, and to come early, is the view: volcanoes galore, I don’t think I have ever seen so many at the same time. Two individual perfectly shaped strato-volcanos rise up to the west and south-west, Gunung Sindoro (the one we saw also from Wonosobo) and Gunung Sunbing. Right in front, to the south, is the more complex Gunung Merbabu, and perhaps – I am not sure – Gunung Merapi, one of the most active volcanos of Central Java, behind it. Then there is another volcano, very far in the distance, just the outline visible, which must be – incredibly, 70 km or more away! – Gunung Lawu. And that makes it all well worth the effort, again. Fascinating!

next: to the railway museum in Ambawara and both, Gunung Sumbing to the left and Gunung Sindoro to the right