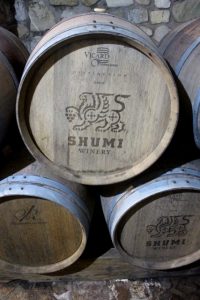 barrels in the cellar of the Shumi winery, one of the many outside Telavi

The real reason to spend time in Telavi is, of course, to sample the wines of Georgia’s most famous wine region. Which we did at the Shumi winery.

Of course, we cannot spend time in Telavi, Georgia’s wine capital, without taking the stuff a little more seriously than we have done so far. If only because in our hotel there is a wine production facility in the basement, which generates a dominant stench in the corridors, 24 hours per day – especially in the mornings rather disturbing, actually. 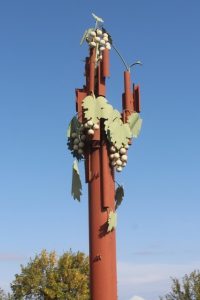 unlike most other wine regions, it also has a rather tacky wine monument 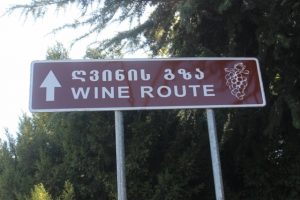 like many other wine regions, Kakheti has a genuine wine route 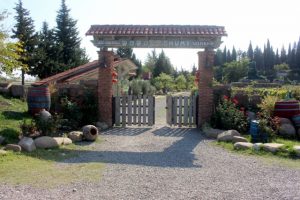 the entrance to the Shumi winery

By now – we have been in Georgia a little over a week – we have learnt to identify the dry white varieties, and we have tasted the dominant red, the Saperavi. We know that Tsinadali and Mukurami are micro-climate zones, which makes them distinct from the regular wine areas, even though – we found out today – they are less than 15 minutes’ drive apart, in a climate zone that to me looks very much the same, and not different from the rest of the Kakheti Plains where the bulk of the grapes are being grown. We have steered clear from the various semi-sweet and semi-dry wines – beats me what is the difference between the two – because they are generally less to our taste. We have also, mostly, steered clear from the qvevri-types, the product of the traditional wine making technique, as we have had some pretty harsh encounters with especially the white varieties, although it is fair to say that some of the qvevris were actually quite nice, especially the one from the wine bar in Tbilisi, which came from the Shumi winery. 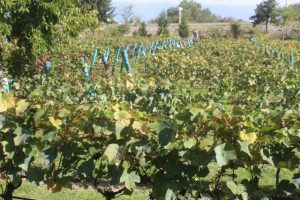 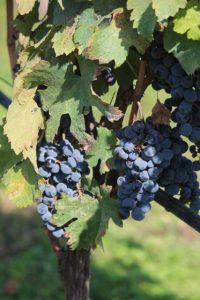 these are red grapes… 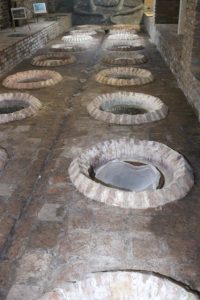 the underground qvevris, 2000 liters each 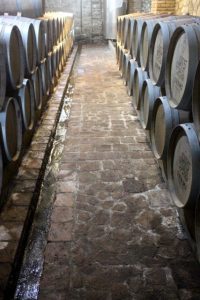 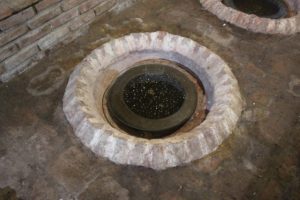 one of them recently filled 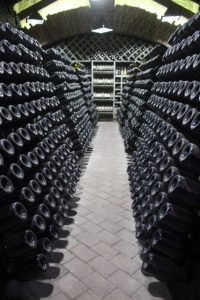 and the bottles – fabulous cellar! 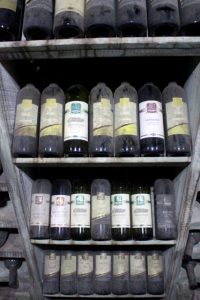 in the back, a collection of old bottles 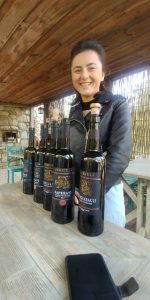 our guide for the tour, with the wines for tasting 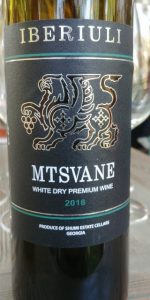 one of the ‘classic’ wines 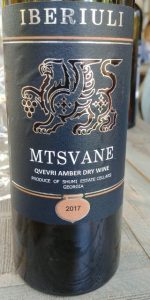 and one traditional, made in a qvevri 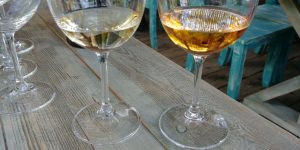 note the colour difference, the darker one the qvevri sample of the same grapes

So when we, 15 minutes outside Telavi, pass the Shumi winery, we just have to stop, and investigate. We are just in time for the tour; it is not that we have never seen wineries and the wine making process before, but this tour is specifically geared towards the traditional qvevri wines, and even though we are sceptical about the product, this is unusual enough to whet our appetite. Qvevris come in all different sizes, but the estate has just a series of 2000 liter-ones, buried in the ground. Here the grapes, with skins and all, are being dumped and left to ferment for two-to-three weeks, after which the qvevri is sealed off, for a further six months. And that is basically it. After six months some of the wine is put into bottles, and some is further matured in oak barrels, and bottled later. Our guide admits that from the 2 million bottles a year they produce, only a small part comes from qvevri, the rest is industrially produced using the “classic” method, with which they mean the European way of making wine. Because, she explains, this allows for much more control during the process. But in the countryside, every self-respecting Georgian family has a qvevri in the backyard, and produces their own wine. Of, as we have already experienced, rather variable quality.

At the end of the tour we taste several wines, we are by now familiar with the business model. We have chosen the high-end tasting package, of four premium wines. When I mention that one of them we have had before, in the Tbilisi wine bar, our guide immediately brings another wine – so flexibility is possible, after all -, and in the end makes us taste the five wines, instead of four. And all of them, even the semi-sweet red one, are very nice indeed, and can compete with any decent European or New World wine. Perhaps Georgia is more complex than we initially anticipated.

next: to Sighnaghi and Udabno, and the Davit Gareja monastery 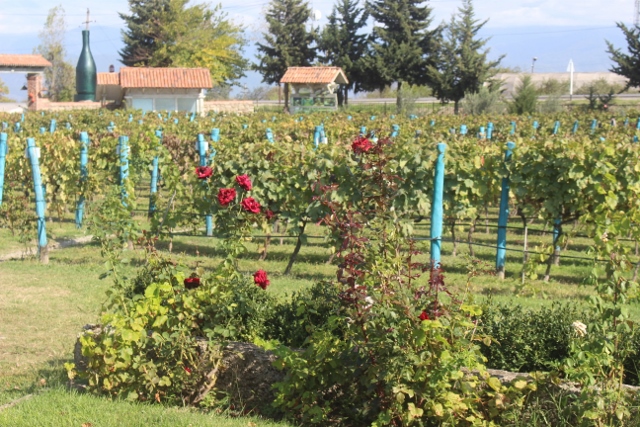 the grape vines, and a rather outsized bottle attracting visitors