19. Vicuna and the Elqui Valley 21. Ovalle and the Hurtado Valley 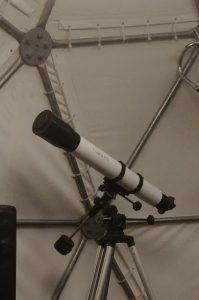 a small telescope in the observatory – to be fair, we looked through a bigger one

Under the brightest sky of the world, you do have to have visited an observatory. Or do you?

Vicuna is also the self-declared astronomy capital of the world. Thanks to the altitude and generally clear skies, there are no fewer than thirteen observatories in the area. A few big, professional ones can be visited for its facilities, during day time, but, really, you want to be there at night, to see some of that twinkling mystery yourself, through a real telescope. Which is where the commercial observatories come in: buy yourself a half-decent telescope, install it, preferably, on a hill, or at least in a place away from too much light, start organising tours twice a night, and there you have your business model.

Just outside Vicuna is Mamalluca, an observatory ran by the municipality, but we were advised that visits here are really a massive affair, with groups of 80-90 people. Instead, we went to Alfa Andea, a small outfit – they are all small outfits – recommended to us by the owner of our hotel. To be fair, we had no other recommendations. We were picked up at 11 pm, by the owner of the observatory himself – who turned out to be a friend of the owner of our hotel. 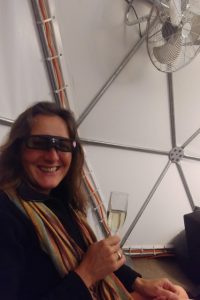 one of the other tourists, looking through a pair of 3D glasses

Our tour started at 11:30. First we were herded into a small white cupula, where we received a brief introduction about astronomy; much too short, but you cannot expect to be explained such complex subjects in a couple of minutes, in both Spanish and English, it invariably reduces to some platitudes like “whatever we see has happened in the past”. Followed by a 30 minute film of a journey back through the universe to the Big Bang himself, which had elements of Star Wars and Planet of the Apes in it, flying rocks and collisions and the lot. Then we listen to Jupiter and to the sun – because we also have been explained that we see only a small part of the spectrum, much of it falls outside the visible part, but luckily some of it is audible. Right. Jupiter sounds like some experimental Russian classical music, the sun more like the low humming noise of a large speaker box at full volume without music.

After an hour or so, we are ready for the real thing, and walk through the dark to an amphitheatre where the telescope is. The sky is indeed incredibly clear, and our guide has no trouble finding several well-known constellations and pointing them out to us. And then he directs the telescope at some point of interest, a galaxy, a nebula or some other phenomenon, and one by one we get to take a look through the lens. To see even more than we see with our bare eyes (and me with my glasses on, which already improves the view significantly). OK. I suppose some people find this exciting, but I don’t.

Because we are a small group, this process repeats itself no less than five times, five different points of interest. It is getting cold. I am getting bored. By half past one we are done, and we are brought back to our hotel again. I suppose you have to have done this, whilst you are in the astronomy capital of the world, but once is enough.

next: Ovalle and the Hurtado Valley 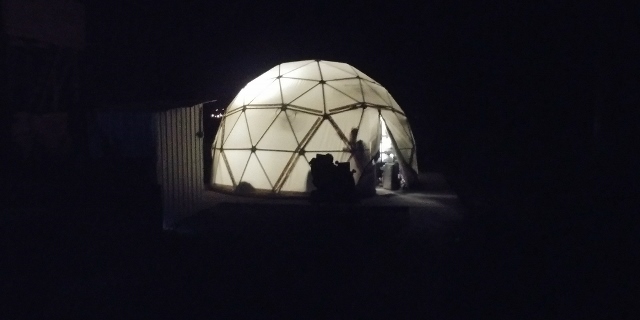 the cupola where we received our introduction, and a glass of wine