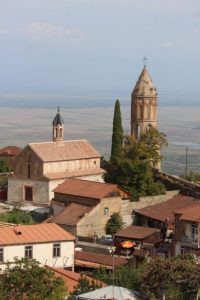 the historical centre of touristic Sighnaghi

The last days of our journey we visit the touristic centres of Sighnaghi and Davit Gareja, both disappointing for different reasons, and we travel back via the Rustavi rustbelt of delapidated old Soviet industries.

From our Shumi wine tasting experience we move on to what is billed as Kakheti’s prettiest village, Sighnaghi. We approach via one of the minor roads, and enter through one of the many gates in the 4.5 km long wall that was built around the place in 1772, and is still remarkably good condition – or perhaps has been restored remarkably well, looking authentic. Which is a bit the story of Sighnaghi: it looks fairly authentic, with its cobbled streets and its large wooden balconies – which definitely have been restored -, its piazza and its museums. And somehow that alone proves to be an enormous attraction; there is really very little else to do, except strolling around, yet this is an extremely popular village. Sighnaghi is the classic tourist trap, full of hotels and guesthouses, restaurants and terraces, and everywhere lined with stalls selling ‘antique carpets’, ‘hand-made’ felt slippers, ‘authentic’ hats and everything else tourists somehow feel compelled to buy if they are far away from home. 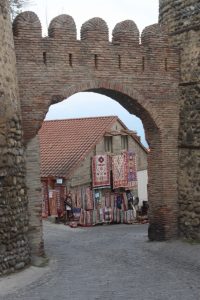 a gate towards the castle 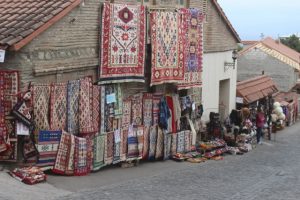 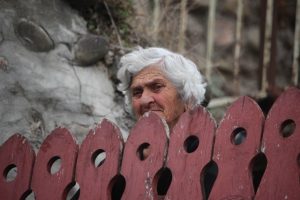 one of the inhabitants not convinced about so many tourists

We do a bit of the strolling around, we walk to the end of the wall, we have lunch in one of the squares. And after an hour or so, we leave Sighnaghi for what it is, and move on. Not our cup of tea. And the weather doesn’t help, it is overcast. 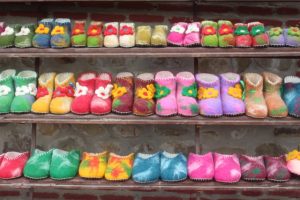 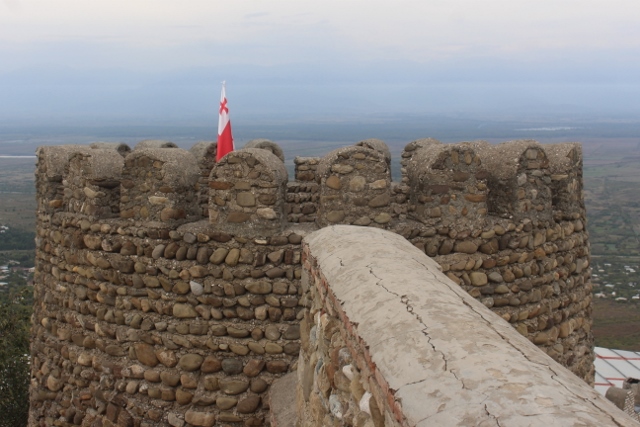 the tower overlooking the plains 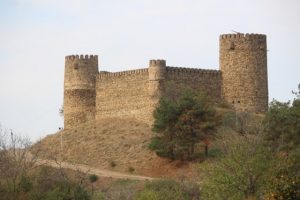 how the Middle Ages may have looked… 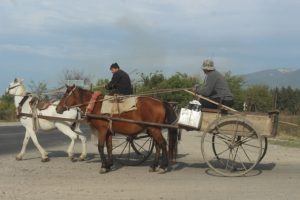 …in more than one way 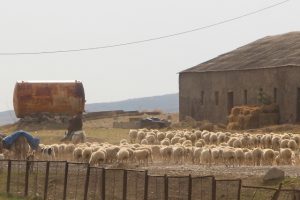 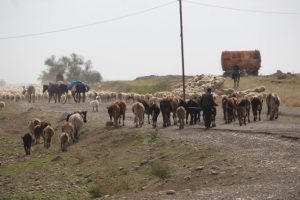 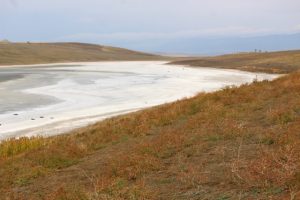 a salt lake on the way to Udabno 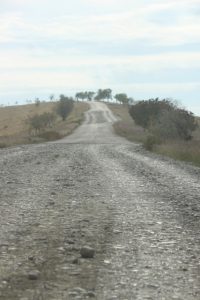 and this how most of the road looks 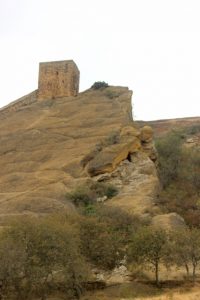 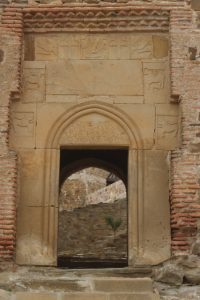 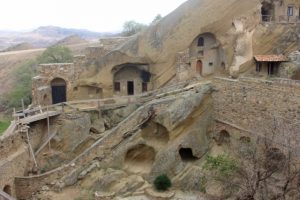 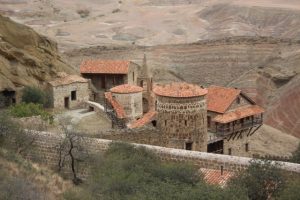 the constructed part of the monastery

Heading to our last target this trip, the monastery complex of Davit-Gareja, we have clearly reached another climate zone, much dryer; the dramatically eroded hills provide the perfect backdrop for this religious retreat, founded in the 6th Century. Unfortunately, the sun has abandoned us, once again. And at the monastery awaits another disappointment. The Lavra Monastery, the lower one of two, located where we park the car, is an impressive enough building, with a church and tower, and refectory, as well as monk’s cells in caves on the side. But the real treasure – according to the guide books -, the Udabno Monastery, higher up the mountain, and consisting of a series of caves, many decorated with old, yet vivid frescoes, is off limits. The complex is close to the Azerbaijani border, which apparently has not been entirely sorted, and Georgian military block the path up. Not unfriendly, but quite firm. I suggest to one of them to accompany us to the monastery, but, that, too, is not an option. So we abandon the excursion, and return to our guesthouse in the village of Udabno, where we spend the rest of the afternoon in the sun – which has reappeared.

It could have been worse, of course. 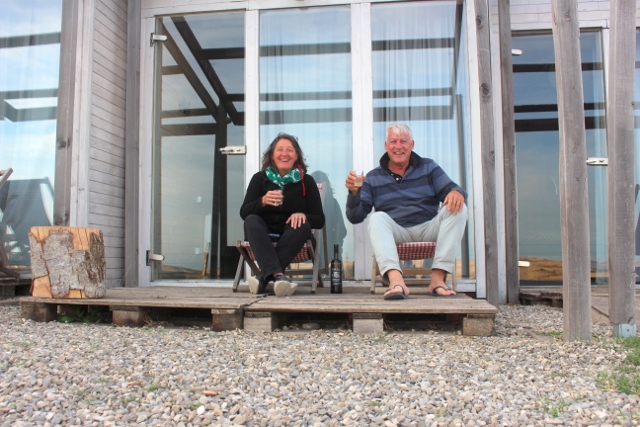 spending the afternoon in our guesthouse 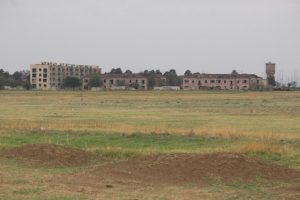 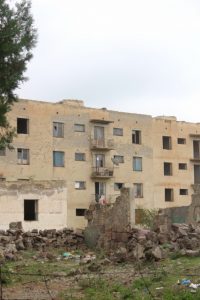 most apartments have no windows 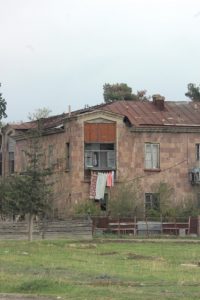 yet, there are people living here

On our way back to Tbilisi, no more than a couple of hours drive from Davit Gareja, we meet the other Georgia, the ex-Soviet republic Georgia. After WWII the area around Rustavi was developed as an industrial centre, with metallurgic plants, chemical plants, and lots of other polluting factories. In good Soviet fashion, workers were directed towards the plants, and accommodation was provided in – there they area again – basic palatis, four- or five-floor apartment blocks cramped together in purpose-built towns. We detour through one of those, a kilometre or two from the main road. Many of the industries have folded, and much of the accommodation in town has collapsed. Yet, there are people living here, or perhaps camping is the better word. I suspect these are not workers, but ethnic-Georgian refugees, that have fled the break-away republics South Ossetia and Abchazia. Quite different from what we have seen so far in this country. Quite sad, too.

next: some final words on our first experience in Georgia. 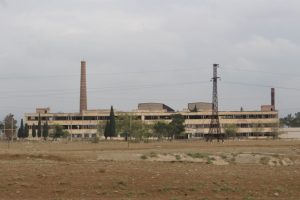 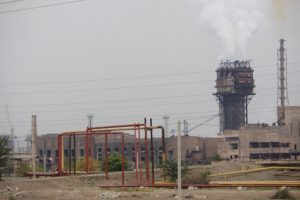 and some are still working 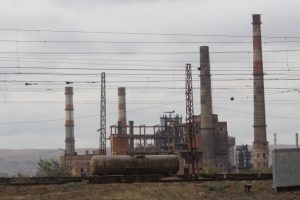 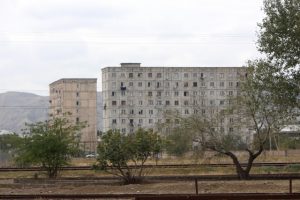 and there they are again, the palatis!