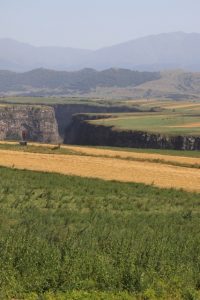 the Debed Gorge, deeply incised in the landscape of NE Armenia

In the Debed Gorge, in the northeast of Armenia, we admire yet more monasteries and churches, but also some characteristic Soviet remnants.

So far the landscape has been pretty dry – what do you expect, in August with 30+ degrees? -, but towards the northeast of Armenia, things change. Well, sort of. It begins with passing through the Pushkin tunnel, a 1750 m pitch dark two lane tunnel – barely two lane, I should add, I was glad I didn’t meet any big trucks inside. At the far end of the tunnel we encounter, for the first time, significant vegetation; not yet lush forest, but many more trees and shrubs than we had seen so far in Armenia. This area, mostly the Lori province, is dominated by the Dzoraget and the Debed rivers, which have eroded deep gorges in the landscape. It does make the landscape a lot more varied that further west. 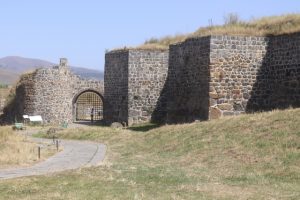 newly reconstructed Lori Bred, what used to be an ancient fortress

To change from the dominant churches, we had incorporated Lori Berd – Lori Fortress – in the program, just to see something else. Well, disappointing: the fortress is almost entirely rebuilt, new walls are merged with the few original old remnants in a truly horrible way. We don’t even get inside. But, small compensation, the location of the fortress, on the edge of the Dzoraget gorge, is quite spectacular. Hmm. No more Armenian fortresses, perhaps. 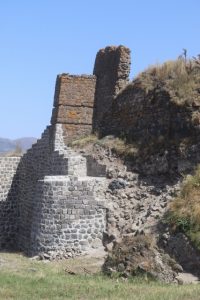 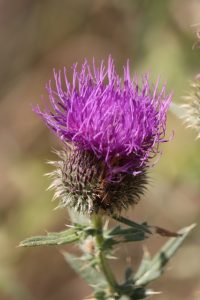 at least there are still some colourful flowers around the fortress 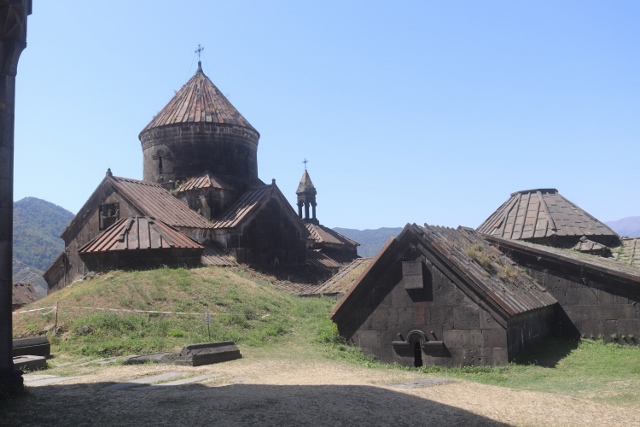 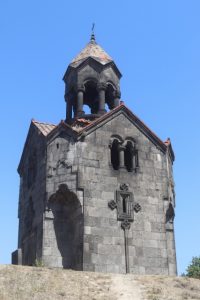 one of the smaller churches at Haghpat 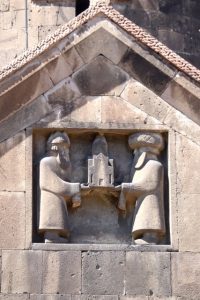 Which, well, leaves us with the churches and monasteries, once again. Two of them, the Haghpat and the Sanahin Monasteries, are included on the UNESCO World Heritage list. Haghpat first, like so many other monasteries, once again beautifully located, on the edge of the Debed Gorge. The complex, started in the 10th Century, consists of several buildings, including what is called a library, but is filled with buried claypots that were no doubt there for the wine (apparently, the library was turned into a storage room after invaders had taken its books). The main church has still a significant number of 13th C frescos, on the sides and behind the altar in the apse, as well as several carved decorations, like two dignitaries holding a miniature church. Apparently, the dignitaries are the sons of Queen Khosrovanush, initiator and patron of the main church, and also of the Sanahin Monastery. 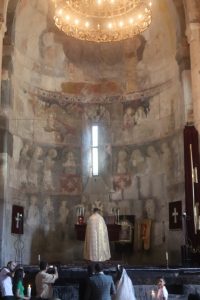 the apse of the main church, with frescoes 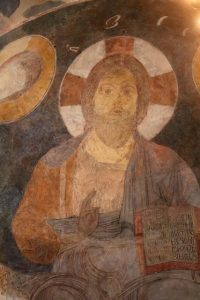 Christ Pantocrator, the main fresco in the apse 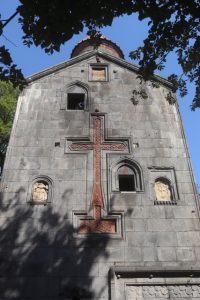 Sanahin is on the other side of Alaverdi, the town near which we are staying. The church itself, or rather, the two churches next to each other, also date from the 10th C, and are not as nice as the one in Haghpat, lacking the frescos, for instance. However, the gavit – a typical Armenian church element which comprises a vaulted meeting hall usually connected with, and in front of the main church -, the gavit is outstanding. Columns have not only been decorated with carvings, elaborate crosses on the sides, but also with animal heads near the capitals at the top, something I have not seen elsewhere yet in Armenia. The gavit is also a kind of mausoleum, or cemetery: quite a few tombstones make up the floor, some of them also carved. 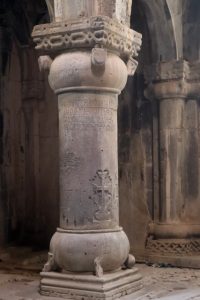 decorated column in the gavit 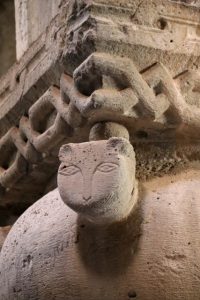 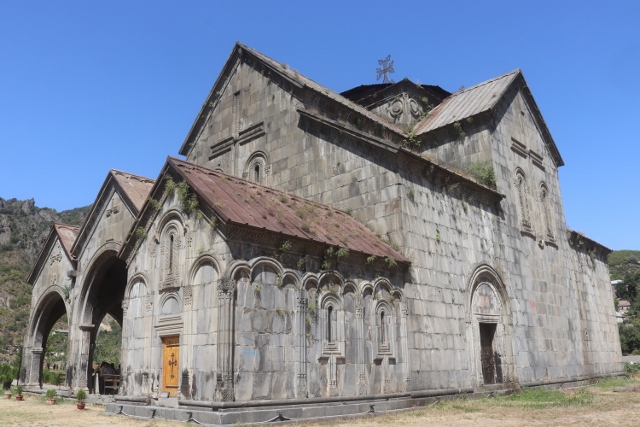 the large church at the Akhtala Monastery 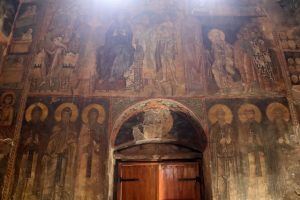 frescoes in the Akhtala Monastery 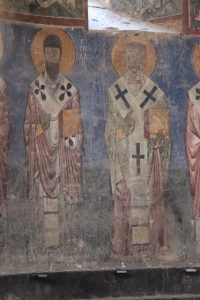 of church men, that much is clear 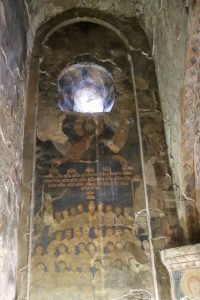 another niche with frescoes 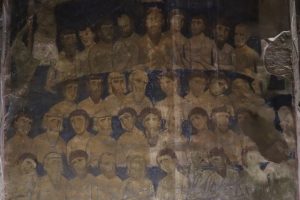 great detail of the previous photo

The third church we visit in this area, a little further up the gorge, is the Akhtala Monastery – all these complexes are monasteries, some working, some defunct, but the main building is, of course, always the church. This one is from a later date, 13th C, once again located high above the river in a commanding position. Much more than other churches, Akhtala has been covered with frescos, from top to bottom, and they are still relatively freshly coloured. Fabulous, and a welcome variation from the churches so far. 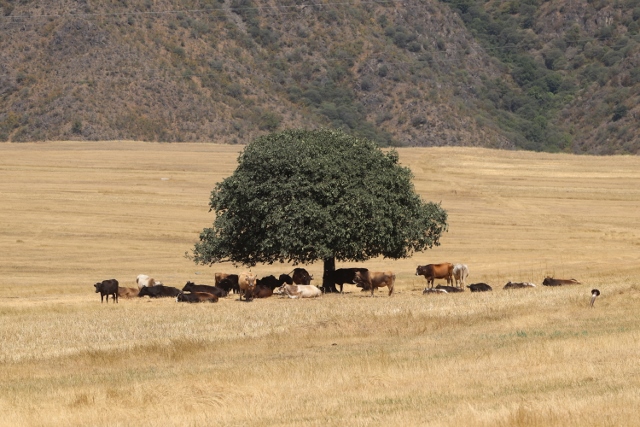 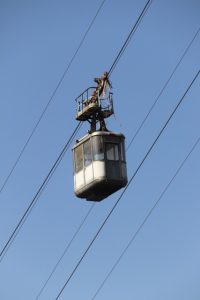 the cable car between the lower and upper part of town, now disfunctional 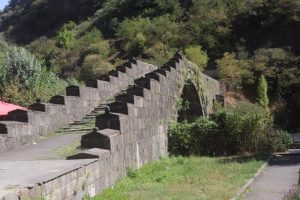 the Sanahin bridge, in the centre of Alaverdi

Alaverdi has more to offer than churches alone. Sadly, the cable car that used to connect the upper and lower neighbourhoods of the town, the area along the river with that on the edge of the gorge, doesn’t operate anymore. When it opened in 1978, it was, apparently, the steepest cable car in the entire Soviet Union, with a vertical drop of 200 m, but is closed in 2015. The foot bridge across the river in the centre of town has lasted longer, in that respect. It was built in the 12th C, and, although patched up, can still be used. 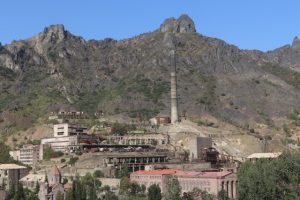 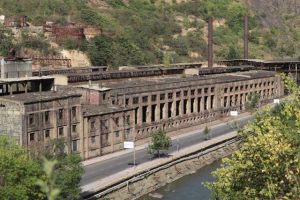 What is not being used anymore, is the huge copper mine that dominates the valley scenery around Alaverdi. You know my fascination with old, decrepit Soviet factories. This one is a jewel! And as seen in so many other places, Soviet factories come with palati housing, and Alaverdi has its fair share of those, including some built at the edge of the Debed Gorge. One can understand why a cable car would have come in handy. 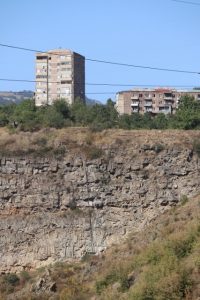 apartments in the high part of town, on top of the gorge 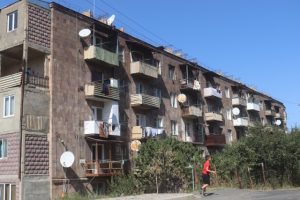 One last example of Soviet heritage is the Odzun Hotel. In our search for a place to stay, we had identified this one, swimming pool, terrace, garden, restaurant and fabulous mountain view, as a possible option. But upon arrival, after an arduous struggle up an unpaved road, we found an almost abandoned hotel – almost, because there was one caretaker lady on site. The water in the pool was ankle deep, the garden overgrown, the view admittedly very nice, but there was nobody else, no restaurant, and the only communication went via the telephone of the lady, connected with an English speaking gentleman who may, or may not, have been the owner, and demanded an exorbitant price for a damp, dark room. So we opted for another, more modern hotel. But Hotel Odzun remains memorable, for its past glory, to be imagined only.

Next: to Lake Sevan 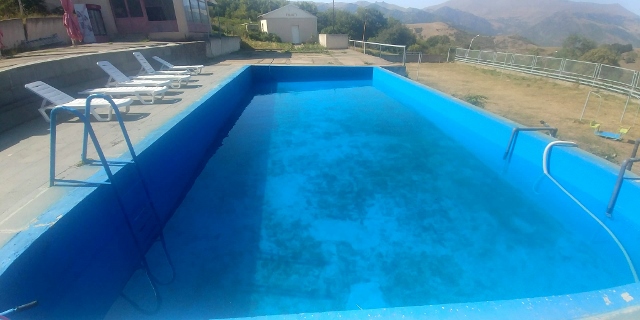 the meagerly filled swimming pool of the Odzun Hotel