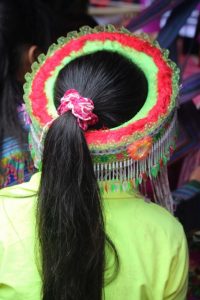 an unusual minority, unsure which one, in the Can Cau market

The second of North Vietnam’s ethnic minority markets we visited was Can Cau, which, despite the bad weather, was a great experience.

A week earlier, upon crossing from China, we had also stopped off in the north, to visit the Saturday market of Can Cau, and the Sunday market of Bac Ha, probably the biggest of the markets. 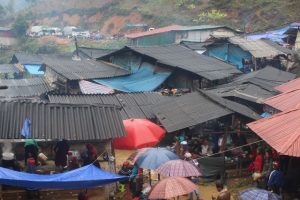 the market in Can Cau 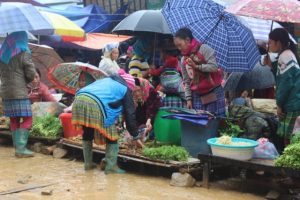 with some fresh produce, in the mud 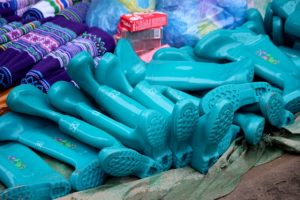 The Can Cau market was a different affair. We arrived round 10:30 am, when the first mini-busses and four-wheel drives with tourist were already leaving again. The road outside the village was blocked with vehicles, some to park, other intended on crossing. In between those, the proud new owners of water buffalos, no doubt just bought in the market, tried to shepherd their acquisitions through the mayhem. It was raining, and it had been raining for a while. The road was a mud pit, the market, too. Some vendors had put wooden planks in between the stands, but they were just sinking further and further in the mud. Some parts were simply no-go area without rubber boots. We didn’t have rubber boots, and although they sold almost everything imaginable in the market, they did not sell rubber boots in our size.

Despite the chaos, and the miserable weather, the market was a delight. On offer was a mixture of fresh produce and cloths, and a bit of tourist stuff. Several guys had parked their extended motorbikes in the mud, one was selling knives, another specialised in slippers, and a third was cutting keys – these obviously rotate between the week markets (we would see all three of them the next day in Bac Ha, again). At the back of the market was the cattle section, where the water buffalo and cows changed hands. But the real attraction where the people, of course, well, mostly the women, dressed in carefully embroidered shirts, and colourful skirts and head scarves. Mostly Flower Hmong (on account of their colourful cloths, as opposed to the Black Hmong of Sapa and environs who have their cloths dyed dark), and some other minorities, too (more photos here). 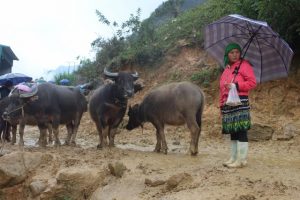 and the cattle section, more mud 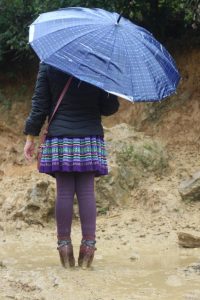 for which high heels come in handy 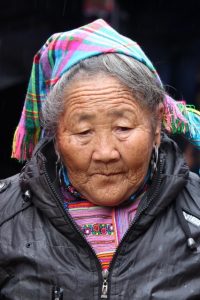 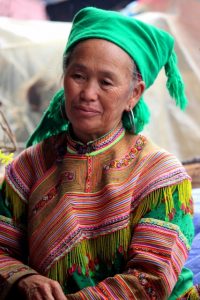 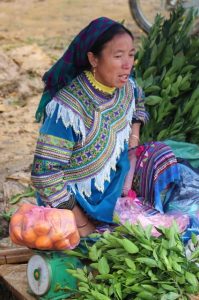 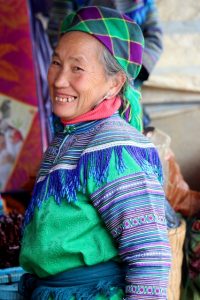 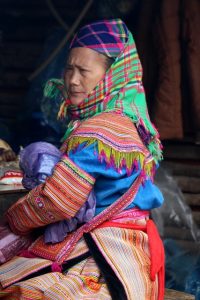 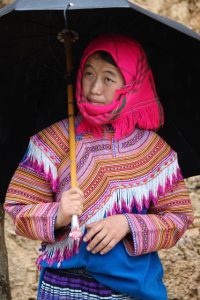 dress protected from the rain by a big umbrella 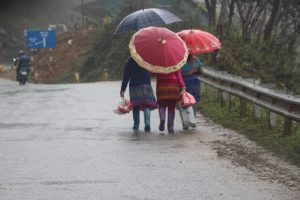 the market is winding down

By about noon, the market was winding down, many people went home. We left, too, and drove the 30 minutes to Bac Ha, where we found a hotel. The area around Can Cau and Bac Ha is as mountainous as Sapa, and is also covered by rice terraces, which, like in Sapa, just occasionally showed themselves through the low-hanging clouds. When they did, they proved to be fabulous. 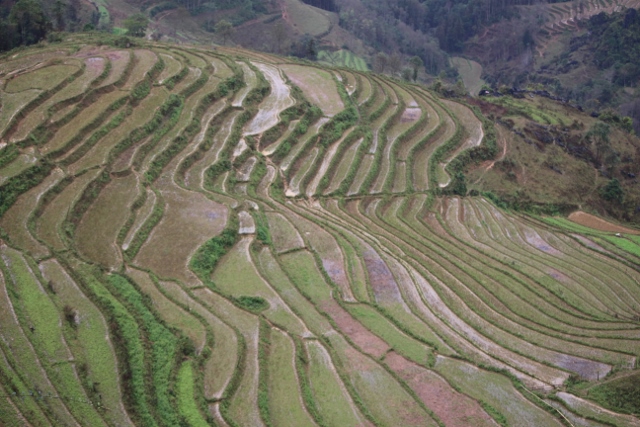