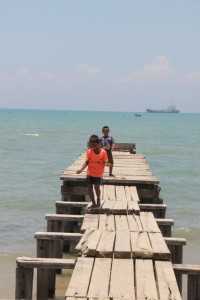 jetty of a fishing village in Pulau Madura

A small island just off the tip of Java, but very different in landscape and people.

The most famous island east of Java is Bali. But there is another island, just to the east of Surabaya, called Pulau Madura. If fact, it is so close that some ten years ago it has been connected by an impressive bridge to Java.

the bridge that connects Pulau Madura with Java – just like the Rhine bridge in Emmerich, we are feeling at home!

Yet, the island couldn’t be more different than Java. Mostly flat, but for an unusual number of gaudy mosques – somehow, every kilometer or so there is another huge pink, green, blue or white mosque, with tiles, tall minarets, quite elaborate (and quite different from most of Javanese villages, where mosques are small and unobtrusive, except for the call at prayer time). The landscape is a lot dryer, dustier; here no pretty rice paddies, no picturesque villages, no palm tree overkill. The main road, which takes the southern side of the island, is lined with buildings, small businesses mostly, and is clogged with traffic. It is Saturday, and two of the settlements along the road hold market, which adds to the chaos. Besides, in many places opposite mosques the road has been narrowed, with traffic markers or rope, to slow down traffic further, in the hope that passers-by donate to the collection for the mosque; often four or five, sometimes more, volunteers are holding up plastic buckets inviting you to drop your money there. I have seen this before, in Aceh, but never to the extent as today on Pulau Madura. 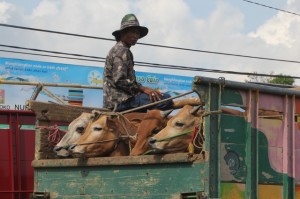 cattle being transported by truck 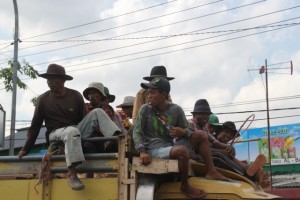 the men of Pulau Madura, on the way to the cattle market 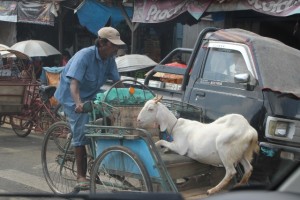 strange customer for the becak driver?

We drive to Pamekasan, the island’s capital, and then across the low ridge – it turns out that the island is not really entirely flat – to the north coast. Even in this most rural of rural parts, houses are new, modern, and pretty large. Construction is booming. Obviously, the Madurese are doing well, probably mostly from family members that have moved to Java or elsewhere. Yet this stretch of road, though somewhat more attractive, is still not particularly pretty. fishing boats in front of the beach 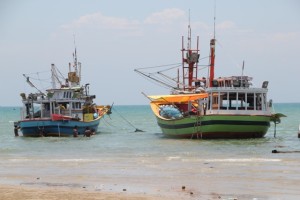 and some of the larger fishing boats 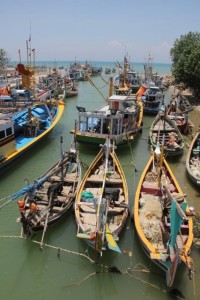 the river mouth clogged with all sizes of boats 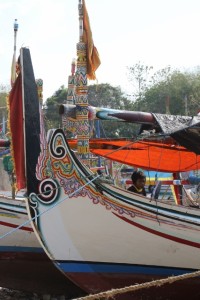 The only places worth stopping –apart from the Pamekasan stadium, where the annual bull parade takes place, more about that later – are the small fishing villages, where boats have been moored all the way up the mouth of a small river. The boats, a wide variety of types, are all very colourful, and make for good pictures, and a reason for a stroll through the villages. Which is when one starts noting that the Madurese are also very different people from the Javanese. Much more outspoken, much more direct, and much more assertive – we would make the same observation later again, in a Surabaya market dominated by Madurese sellers.

So, all together, our excursion to Pulau Madura was perhaps not the most exciting day of our travels, but certainly an experience – the realization that such a small distance across water can create such differences, in landscape as well as in people. It will be interesting to see whether such changes occur equally, or even more pronounced, moving to Sulawesi, and later on to Kalimantan.

next; the reason to come here were the bull runs, the Karapan Sapi 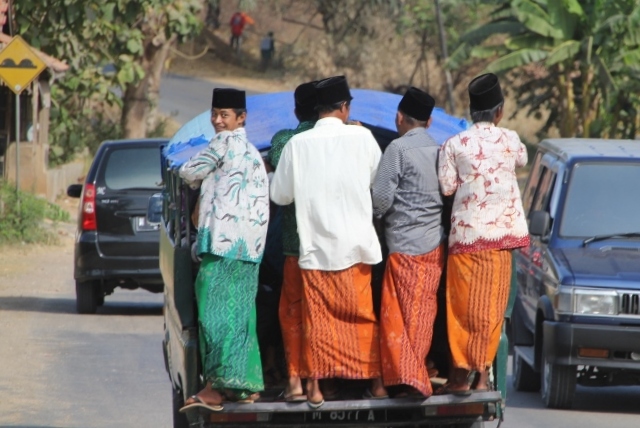 and more Madurese men, on the way to a party