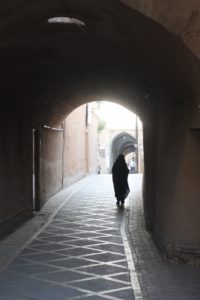 random alley in the old town of Yazd

A wonderful old town, a maze of alleys and arches, with several mildly interesting sights, but mostly of interest because of its badgirs and qanats.

In Yazd we got lost. Which is no surprise, because the old city is a maze of alleys so narrow, that it is difficult to get your bearings. Few alleys run straight, many branch off in different directions. Quite a few are part-covered. Everything looks the same, every house is mud-bricks covered with a mixture of straw and mud, all the same colour. There are almost no shops. In fact, for most of the day the old town is deserted. Except for us. 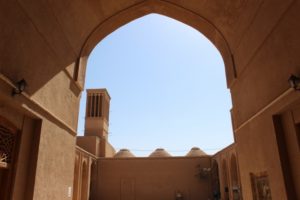 Yet, you always end up somewhere: a series of archways, an old door or an ancient water reservoir, reached by steps that go some 20-30 meters down – a temporary escape for when it gets too hot. The odd mosque, or a domed structure called Alexander’s Prison, not particularly interesting. A restored water mill or a suprise mansion, Khan-e Lari, which turns out to have a beautiful courtyard behind those high walls. It begs the question what else is hidden in the old centre of Yazd. Occasionally, there is a restaurant with a roof top terrace, an excellent opportunity to oversee the old town from above, and admire the forest of badgirs, chimney-like structures on top of many of the houses, that have been designed to catch the smallest sigh of wind, and transport in down the ouse. All in all there are a couple of sights in the old town, but the real beauty is just to wander around, from alley into alley, and take in this wonderful neighbourhood, which may well not have changed for hundreds of years. Except that nowadays the occasional car inches his way through lanes just wide enough, at the expense of pedestrians, and motorbikes do the same, but at much higher speed. 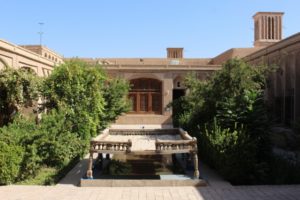 courtyard of the Khan-e Lari mansion 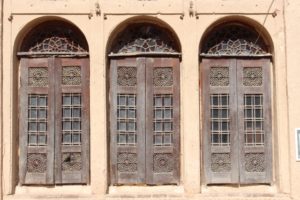 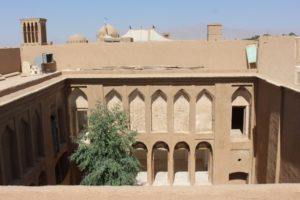 a courtyard seen from a roof: what else is hidden behind the high walls of Yazd? 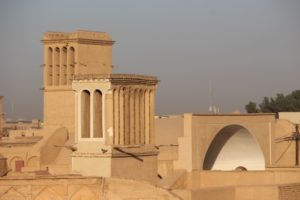 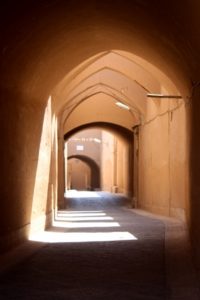 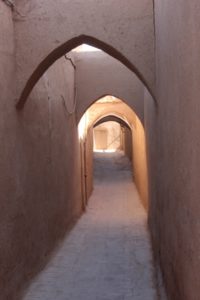 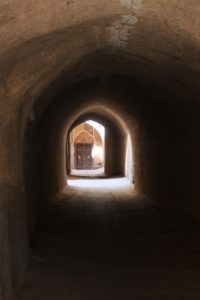 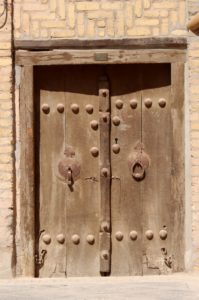 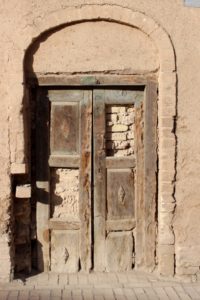 and an even older door

Yazd is an age-old desert oasis and trading post, in between the Dasht-e Kavir in the north and the Dasht-e Lut in the south. It is also the spiritual centre of Zoroastrianism, Iran’s very ancient pre-Islamic state religion. There is even an Ateshkadeh, a Zoroastrian fire temple, in town with flames that have been burning since 470 AD, or so it is claimed – albeit not in the same location. 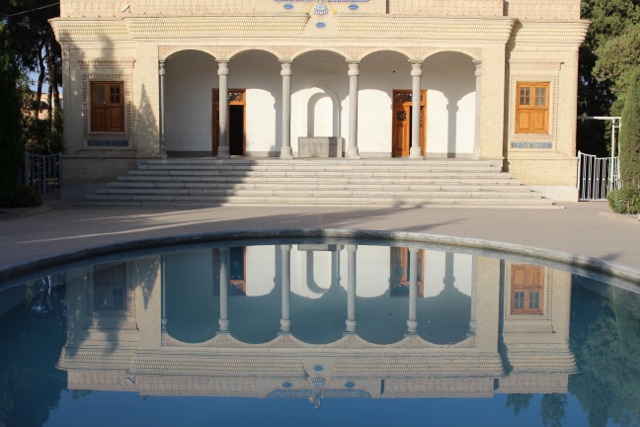 the Zoroastrian temple of Yazd 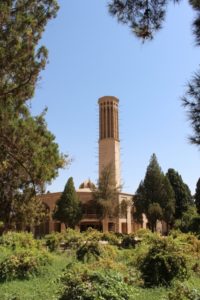 the tallest badgir, in the Bagh-e Dolat Abad 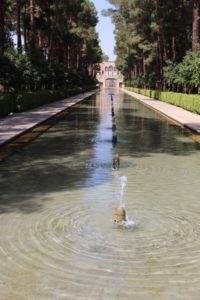 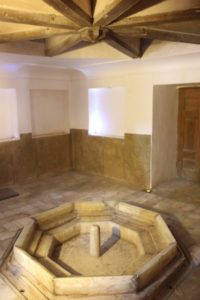 the lower end of the badgir, where air would be flowing over the marble basin underneath 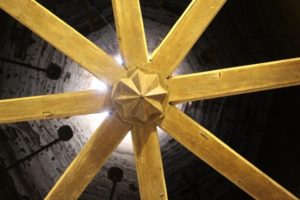 looking up through the badgir

Two more worthwhile sites in town, but outside the adobe centre, are the Bagh-e Dolat Abad, not for its Unesco-listed garden, which is pretty dry at this time of the year, but for its badgir, apparently the tallest one in town, on top of the pavilion, once one of the residences of Karim Khan Zand, of Shiraz fame. This part of town is crossed by several canals, now dry, and used to park cars and children’s play grounds, but quite possibly carrying the occasional water in spring, I don’t know. 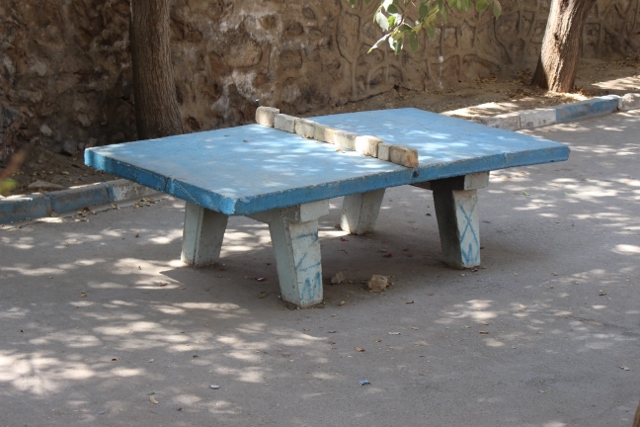 a tabletennis table in a dry canal, note especially the inventive net 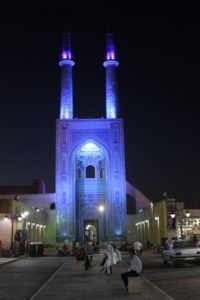 the Mashed-e Jameh by night 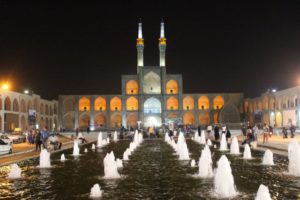 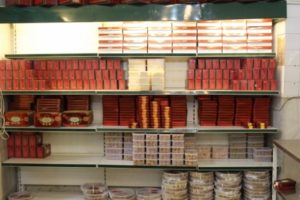 the inside of the most famous sweets shop in Yazd

The second one is the Amir Chakhmaq Mosque, with a three-story alcoved facade and a pool with fountains in front. The mosque minarets and the facade are lit at night, and so are the fountains, which change colour; all nice, but the real reason we came back here every evening, is to buy sweets in the shop at the corner, obviously a Yazd institution. We just buy a small box or two, but the Yazdadis buy piles of huge boxes, plastic bags full – for more professional sweets eaters than we are. 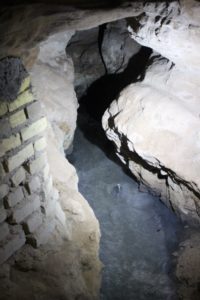 a now no longer used qanat, this one in the restoerd watermill 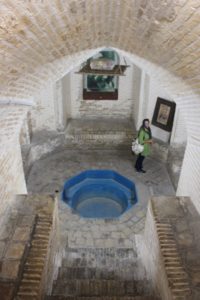 a water reservoir in the Water Museum

Opposite the sweet shop is the Yazd Water Museum. Hmmm, doesn’t sound exciting. We have a look anyhow, and this turns out to be one of those lovely small museums, focussing on another Iranian desert feature, the qanats. These are age-old irrigation chanels, dug underground – and I mean, underground, some of them are 30 meters below surface – that carry water from the mountains to the towns, ingenous structures. The museum explains, and illustrates through plenty of old photos.

When the sun goes down – quite early here, so far eastwards – and it cools off a bit, more people come out onto the streets, and into the shops and the bazaar. Even the old town sees some people in the alleys. Carpenters and iron mongers now have opened their work places, and for a few hours there is some more activity around. But by ten in the evening things have closed up again. Trying to find our hotel back, we get lost once more. But who cares, Yazd is a really nice town to spend a couple of days. 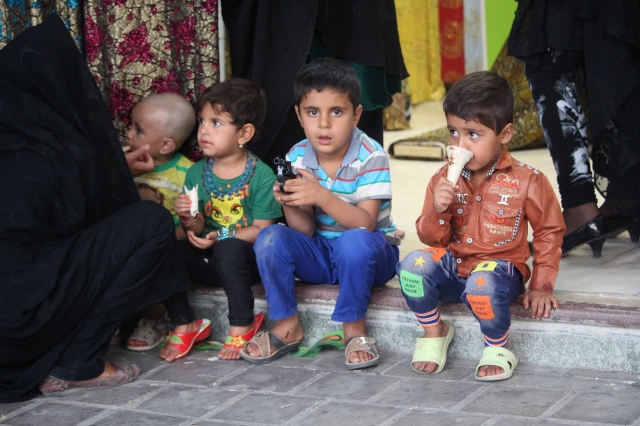 the kids of Yazd