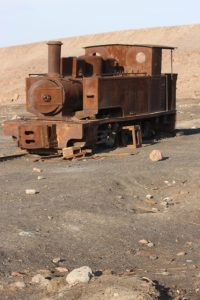 an old steam engine used between oficinas, in Humberstone

From most of the saltpetre oficinas is not much remaining, but the ghost town museum of Humberstone and Santa Laura is a wonderful example of how life must have been at the time.

The Oficinas, the places where the rich caliches with saltpetre were being dug up from the desert, have so far eluded us, because we don’t have our own transport. They are really just small establishments in the middle of nowhere, in the richest areas perhaps 3-4 km apart, places where workers lived who spent their entire day working under the burning sun. They were often connected by a railway that took the ore away. Quite a few of the oficinas were bigger, simple towns that supported whole families, complete with school, general store and a cinema,. Where everybody was dependent on the company, who supplied housing, but only if you worked there, and sold food, but only to the residents. 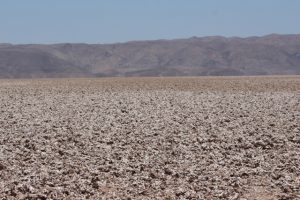 this is the sort of ground, the salar, below which the caliche deveeloped

We have rented a car again, and try to find some of the oficinas, with no more than Google Maps and a now dis-used railway track as a guide. A poor road parallel to the railway passes several of them, but none are really interesting; these oficinas have largely disappeared, are no more than a pile of rubble left in the desert. The abandoned ghost towns, described by various sources, are obviously elsewhere, and without detailed knowledge and/or a lot of time, we are unlikely to succeed. 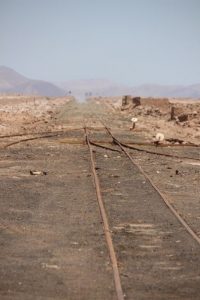 the train track as our guidence to find oficinas 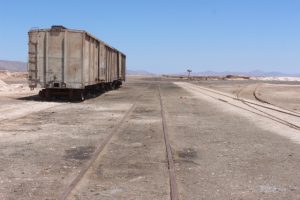 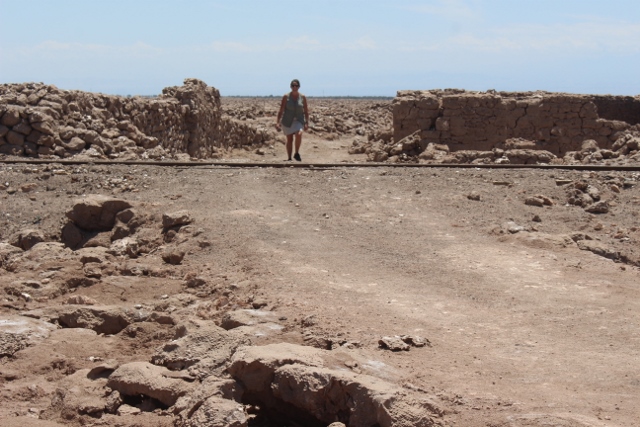 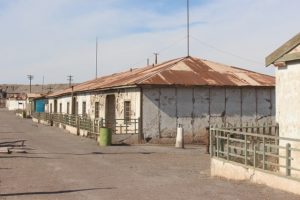 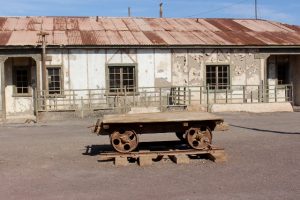 more housing, and the street filled with old equipment 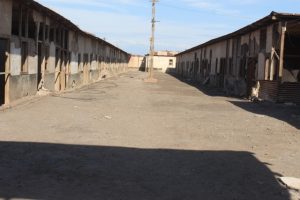 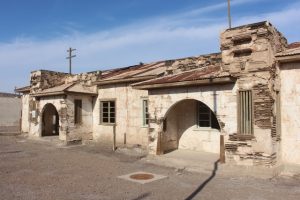 and quite attractive villas 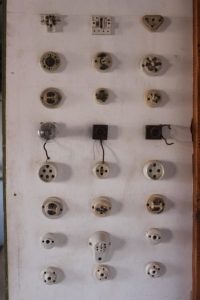 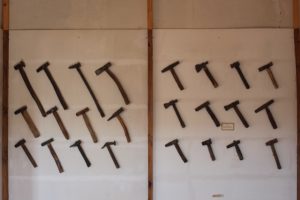 and the selection of hammers, geologists, take your pick 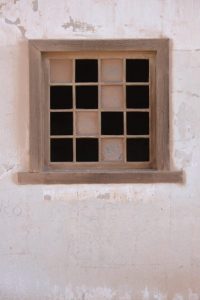 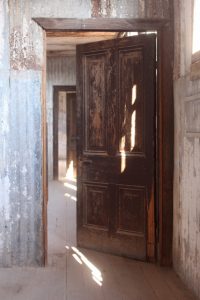 series of doors in the sports accomodation 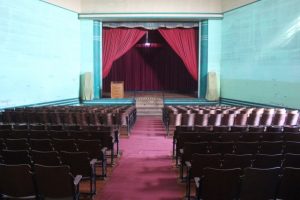 and on the inside

But then there is Humberstone. An hour outside Iquique, a few enthusiasts have saved this oficina from pilfering and decay, and turned the town – here we do have a real ghost town – into a museum. With streets of abandoned houses, some used to exhibit tools and other artefacts from the saltpetre era. A wall full of hammers, another with spades. Kitchen utensils. Communication equipment. Wall sockets! But the most impressive part is just the town itself, with all its facilities. Houses for worker families, bachelor apartments, and middle class and management housing much larger and luxurious, with tennis court for the privileged. There is a basketball court, a theatre, the store and the hotel, everything kept as authentic as possible – well, the store is adorned with fake products and wax figures selling them, but in this case that is not too disturbing. 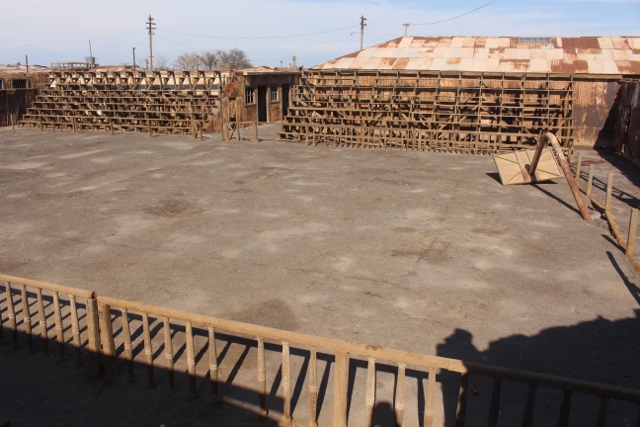 leading to the basketbaall stadium 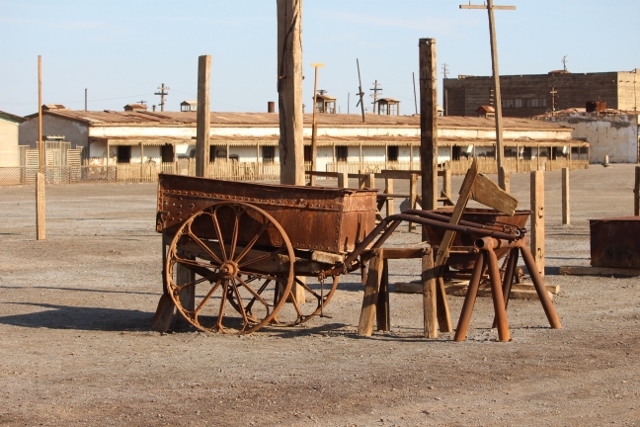 don’t you love the horses? 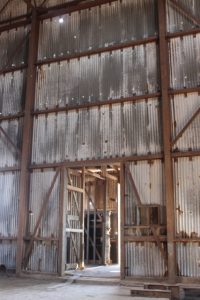 entrance to a factory hall 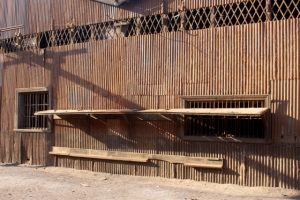 a factory hall, at the production facilities 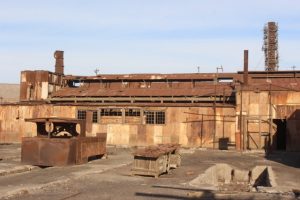 and another production hall

A little further are the Santa Laura production facilities, and several corrugated iron factory halls, containing the energy room, the garage, a hall full of old steam engines. All severely rusted; and when the wind blows, the noise of rattling walls and ceiling is somewhat unsettling, you have the idea that the whole thing may collapse anytime. But it doesn’t, we wander around for hours. And it is fascinating! 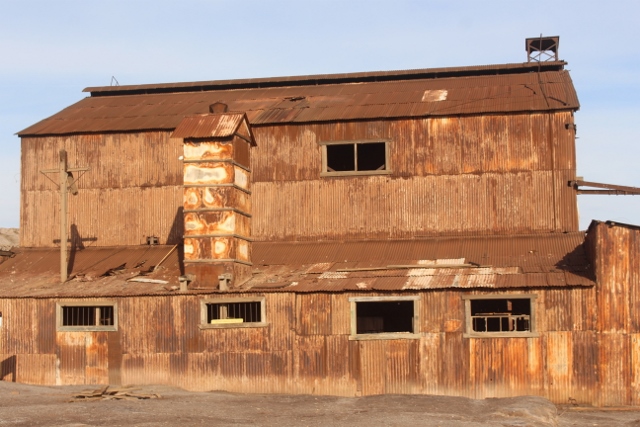 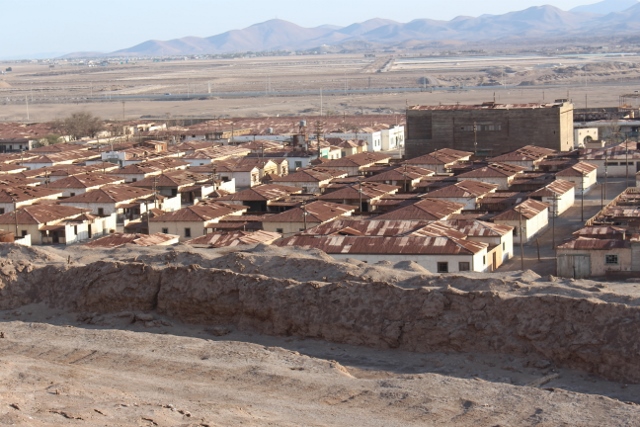 the extend of Humberstone 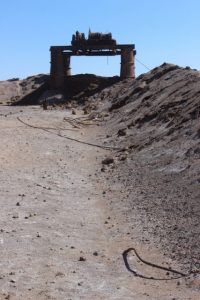 and a huge lifting facility, left to rust 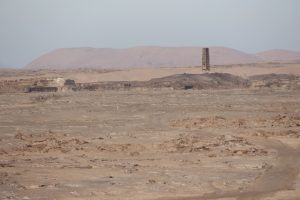 a distant remnant of another oficina 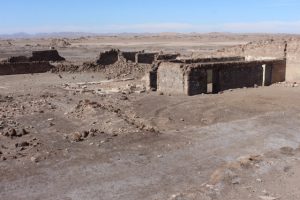 remnants of Oficina Mapocho, not far from Humberstone

The next day, with our newly-acquired knowledge, we try once more to find some of the other oficinas, not necessarily in museum form, but just left as they were. We come across Oficina Mapoche, and La Santiago, and a few others, too, but nowhere as spectacular as Humberstone and Santa Laura. What we do find is, at the locations of the oficinas, some buildings, and lots of rubbish, in the form of rusted iron bars, wire, nails etc, clearly left from the work. The railway is back, some more traces, but it looks like many of these have, at one moment or another, been used by the army, too, some newish barracks compromise the authenticity. I think, but who knows? We already miss our knowledgeable friend from Iquique. 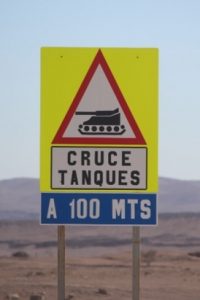 a true warning, not to be ignored!

That we are in a military area is clear. All along the highway we have been warned for crossing cattle, crossing deer, all very unlikely in this driest of dry deserts. But a sign warning us for crossing tanks, hmm, that may be a lot more likely.

next: there is more to this area, including geoglyphs.