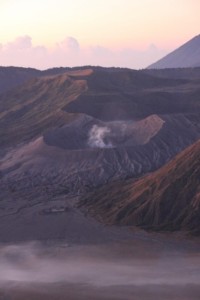 the Bromo crater in the early sunlight

Mountaineering made easy: beautiful volcano scenery, but you won’t have the view for yourself.

Unbelievable as it may sound, we were running out of time. Not that we are planning to come home soon, but we had booked ourselves onto the ferry from Surabaya to Makassar, on Sulawesi, and we had just two days left to see the Bromo Volcano, after Bali and Borobudur perhaps the third most popular tourist attraction, and the Ijen Plateau, another volcanic region in East Java. This called for drastic measures, of course, and we abandoned public transport and booked the tour: leaving at midnight to drive straight to Bromo, see the sunrise, then on to a hotel near Ijen, to leave once again in the middle of the night to see what is called the blue fire inside the Ijen Crater, before yet another sunrise at the top. Those damned sunrises take a toll on proper night rest! 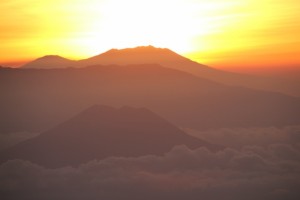 sunrise, just to prove we were up early

For Bromo, one first need to go to a village called Cemoro Lawang, to change to a 4WD Jeep. Half of the village owns a Jeep, it seems, and although I think it is possible to go all the way up in a sedan, you wouldn’t want to get cross with the village people and ruin their business model. Our tour operator certainly didn’t. We were early, 3 am, and going up the mountain we could see, behind us, the lights of a whole string of Jeeps following us in the distance below. In fact, one gets up the Penanjakan mountain, from where one observes the sunrise. We thought we were early: but arriving at the parking lot, there were in fact already plenty of Jeeps, and plenty of tourists making their way up to the viewing platform, five minutes’ walk away. I mean, this is mountaineering for the masses! We had been warned that it could get cold, so we had brought a jumper, a fleece. We were underdressed, the average Indonesian tourist on the mountain has a woolen hat, down-filled winter jacket, gloves, and whenever possible an extra blanket. 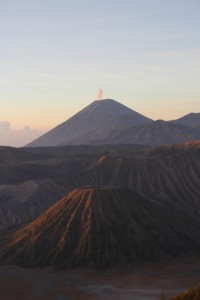 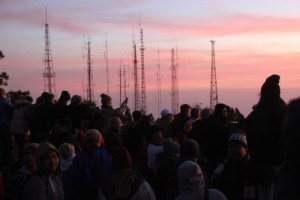 the viewing platform on Gunung Penanjakan, also used for antennas 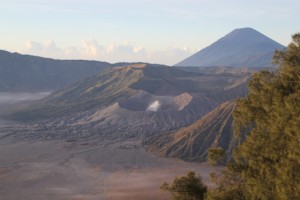 another view of Bromo (just because it is so pretty), with Gunung Semeru in the back

The platform, complete with several rows of benches, does in fact provide a nice view. In the distance, Gunung Semeru, with over 3600 m the highest mountain on Java, occasionally puffs some steam from its active crater top. In front are small, extinct Gunung Bakot, Gunung Kursi, and the bare crater of the Bromo – also occasionally puffing -, all three rising from what has been called the Sea of Sand, and is in fact volcanic debris at the bottom of the much larger, all-encompassing ancient Tenggar Crater. After the sunrise, most of the crowd of a couple of hundred people – relatively few, I have been told, during weekends and in the high season there are many, many more – left, to climb the Bromo proper. We stayed a little longer, until the sun had cleared the Tenggar Crater rim and started to illuminate the flanks of the Bromo. This is, after all, what we came for. And it is indeed a spectacular view. 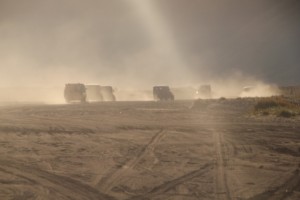 an army of Jeeps rushing through the Sea of Sand

The “climbing” of the Bromo, from the Sea of Sand to the crater rim, is an altogether different experience. The Jeeps are forced to park a little away from the mountain slope. It now transpires that the other half of the village owns a horse, which can be rented to bring you to halfway up the slope, otherwise a 10-15 minute walk through the sand. And through the horse shit. Which stinks. We forsook the opportunity to add another form of transport to our list, and slugged it out walking halfway up the slope. Where the stairs start. The what? The stairs! The last 100 meters or so, to the crater rim, one climbs the wooden stairs. Really! As I said, mountaineering made easy. 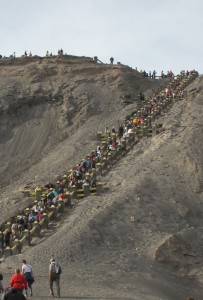 the stairs towards the top 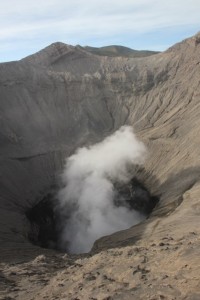 the view inside the crater

Up on the crater rim, a hand rail stops people from falling in. Many are trying anyway, crowding the area right above the stairs: having come all this way, why would you move any further? But a short walk to the side allows for more quiet, enjoying the view down into the crater, which now permanently expels a cloud of smoke, and away from the volcano, towards the Sea of Sand, and the Tenggar crater wall. Once again, nice view.

Don’t get me wrong, going up the Bromo is absolutely worthwhile. But the process, well, it undermines the idea of adventure a little. Bromo is, after all, just as developed a tourist spot as so many others we have already encountered.

next: to another volcano, and into (!) the Ijen Crater 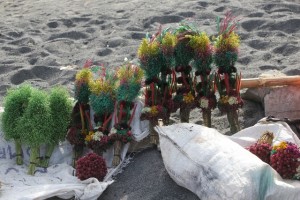 these are flower offerings made by the Tenggar people, to be thrown over the crater edge