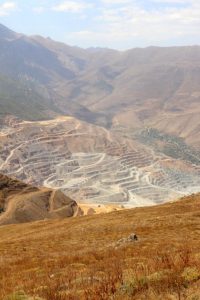 the mine at Karajan, a small town near Kapan

An excursion into the mining area around the town of Kapan is only partly succesful, but even the failures are entertaining.

Of course, we cannot stay a full four days in a hotel room doing nothing, or very little. So one of our four days in Goris we went on excursion to Kapan, some two hours’ drive further south, along the main highway to Iran. Not for the fortresses, not for the churches and the monasteries, but for, let’s call it, industrial heritage. 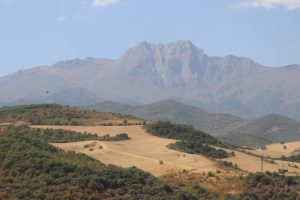 the landscape on the way to Kapan 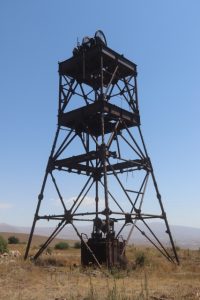 not only big mining, the area is also riddled with small scale shafts like this one 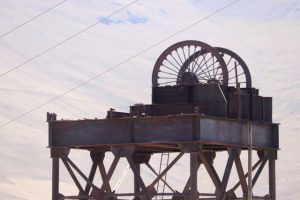 top of the rig, cannot be simpler 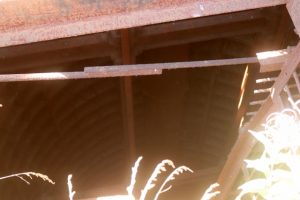 looking into the mine shaft, which is unprotected 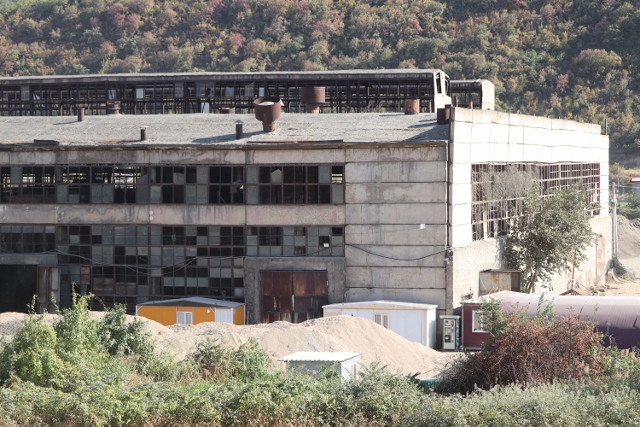 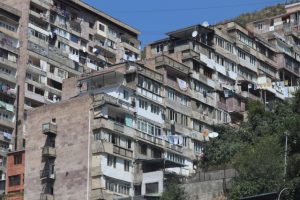 the accomodation available in Kapan 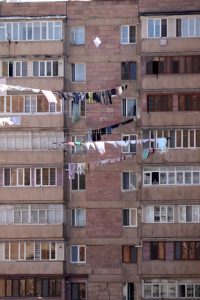 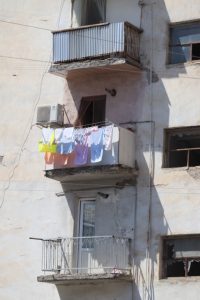 palati balconies, not closed off 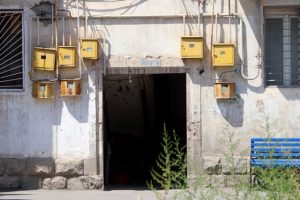 and everybody their own gas meter, at the entrance 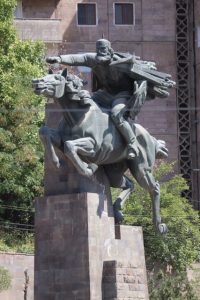 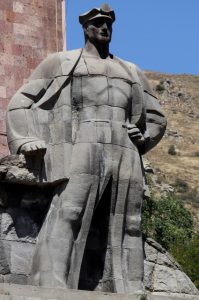 monument to the miner, outside Kapan

Kapan used to be a fairly important town, as a centre of mining activities during Soviet times. Already on the approach, the Voghji river valley, the main river that flows from Kapan, is littered with old Soviet plants linked to small scale mining – or so it seems. And driving into town, more derelict factories line the road. More importantly, with factories come palatis, the mostly low-rise – four to five floors, so no lift required – apartment buildings that were needed to house all those factory workers and their families. Readers of this blog are, by now, aware of my fascination with this specific architectural style. theonearmedcrab.com is proud to announce that, after today, Kapan has been officially named palati paradise of the ex-Soviet Union (I know, I know, replacing Batumi, that got the title less than two weeks ago). They are everywhere!  In the fairly compact town centre, with corrugated iron balconies, supporting laundry lines. Along the main entry road and river valley, here much higher than five floors, but equally decorated by laundry. There are no normal houses in town, everything is apartments. Ugly apartments.

The only worthwhile attraction in Kapan is the statue of David Bek, an 18th Century Armenian revolutionary who fought against Muslim invaders, initially Persian, later Ottoman. Wikipedia claims that the circumstances of Bek’s death are uncertain, some believe he died fighting the Turks, others claim illness. I cannot find back where I got it from, but the more compromising story I read is that the Ottoman commander at the time threatened the villagers of the place where Bek was staying with extermination, if they did not deliver the revolutionary. Upon which the villagers grabbed Bek, chopped off his head and went to the commander to present it to him. To which the commander’s reaction was, that this was such a low deed, that he killed all the villagers anyhow. Now who is the bad guy? Admittedly, I don’t know if it is true, but the story is too good not to include here. 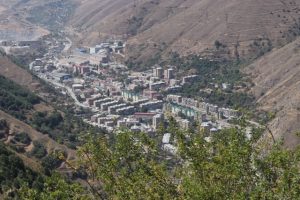 the small town of Karajan, with the mine visible in the distance

Back to mining. Full of stories, I also read that Soviet geologists and engineers had determined that the ground under Kapan was so full of minerals, that at times compasses wouldn’t work – which is interesting, because the mining efforts in and around Kapan are for non-ferrous minerals. Never mind, there are some pretty big mining complexes around town. In fact I now recall that during our last trip to the Caucasus we flew over this part of Armenia, from Nakhichevan back to Baku, and I did spot a gigantic mine from the plane. Would this have been the molybdenum mine near the village of Kajaran?

We drive to the village, 20 minutes out of Kapan, and straight to the mine. Who knows, maybe they let us in, and we can take a closer look ourselves. They don’t. In fact, they seem bewildered by our request, a kind lady at the reception even calls one of the managers, but no, the mine is closed for anybody who doesn’t belong there. Fair enough, we hadn’t expected anything else, really. 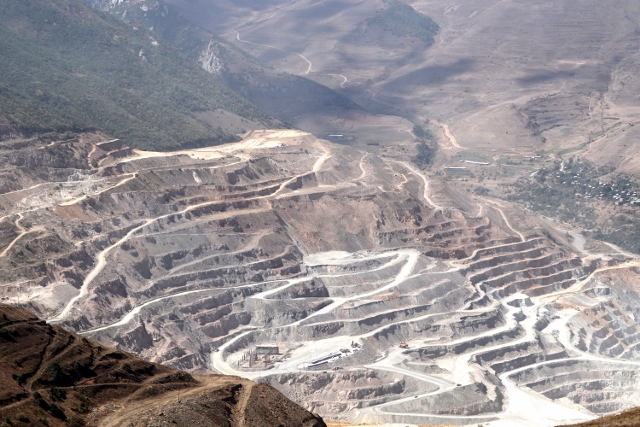 the molybdenum mine in its full glory note the size of the truck in relation to the strips 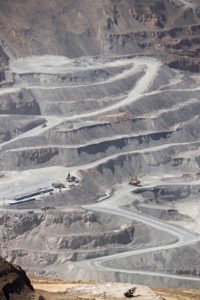 more equipment in the mine 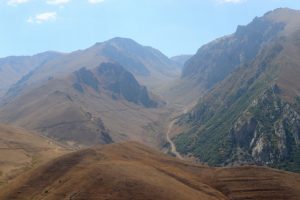 the view from the Megri Pass 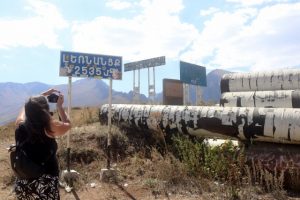 and the view of the pass

So we drove up, further south to the Megri Pass, at 2535 m high, and just before the pass we identified the ideal viewpoint for the mine, a short stroll off the road. And this is indeed a complex that one could have seen from the air, gigantic strips – the size illustrated by the tiny cranes and trucks on the photos, which are, of course, in real life not so tiny! – have been dug out, level after level, covering hundreds of meters of vertical offset. Impressive. Not that this is ever going to be set straight again, of course, but in that respect it is not the only mine where the environment is victim. And a mine like this is evidently visible from the plane.

But there is another mine, combined copper-molybdenum, just north of Kapan. Which, apparently, has a huge, heavily polluted reservoir at its base, no doubt also visible from a plane. Perhaps this is what I saw three years ago? I cannot remember, but we might as well have a look at the reservoir, called the Artsvanik Reservoir. 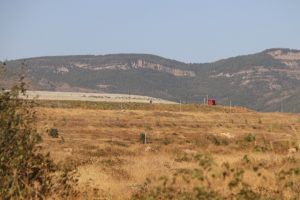 the dam at the end of the Artsvanik Reservoir, which is all we got to see 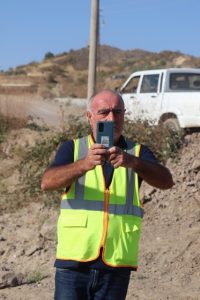 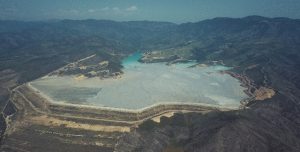 the reservoir, slug in the front, bright blue water in the back 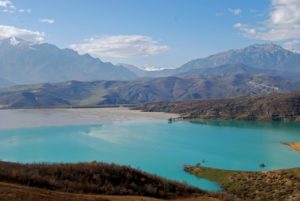 Not so fast! We follow a small, unsurfaced road that is supposed to lead us to the reservoir, but only gets us as far as a huge dam. When I see cranes and containers ahead, I already fear that we will be refused entry. But the road, in fact, leads past the barrier – where people with yellow vests are looking curiously at where we are going. So, perhaps we get a chance further down? No way. Alarm Phase One has been called, and within minutes, from the opposite direction a jeep approaches us, and stops me, by now walking – and clumsily trying to hide my camera with enormous tele-lens. Where I was going? In Armenian, or Russian, but I did get the gist of it. So I explained that I was a tourist and wanted to take a picture of the lake. So, can I now walk on? No. NO. Alarm Phase Two is initiated, and a man, perhaps a manager, is called up, and comes with his luxury 4×4, down the same route. Also, no English, so the conversation remains pretty limited, although everybody understands the issue. Photo? NO, no photo! Why not, secret? DA, secret! By now it is pretty clear that I am going to go nowhere, of course, but in the meantime Alarm Phase Three is arriving, another 4×4, from where the barrier was, with two mean-looking yellow vests. The leader shakes hands with Alarm Phase One and Alarm Phase Two, so I offer him my hand, too, which he reluctantly shakes. Not that this improves the communication, they don’t speak English either. But they do increase the level of threat I feel. You know, this is just a joke, but I don’t want to end up being interrogated – who knows, tortured? – about what I am doing here, which is being the tourist. Anyhow, everybody agrees that I have to go back, an English-speaking young lady is found on the telephone to confirm this to me, and, back at the car, we are escorted off the terrain. Terrain? I have seen no signs of trespassing, no warnings, no company logos, no nothing.

But obviously, I was not going to win that argument. In any case, there are plenty of pictures available on internet. Not from myself, I had spotted the Kajaran mine, from the plane, three years ago, but I found plenty of other ones – mostly associated with stories of severe pollution. The scientific name for this type of reservoirs is tailing dump. Tailings are the residue, resolved in water, from the mining process. Nothing secret, everybody knows about it, and about the Artsvanik Reservoir. So why wouldn’t you want any more photographs?

While I am writing this, a day later, I am sure the Alarm Phase One, Two and Three are still busy filing reports about this major incursion, major security risk. And management is breaking its head about how to prevent future incidents like these. Good feeling.

Next: we start heading back, first via the petroglyphs of Ughtasar. 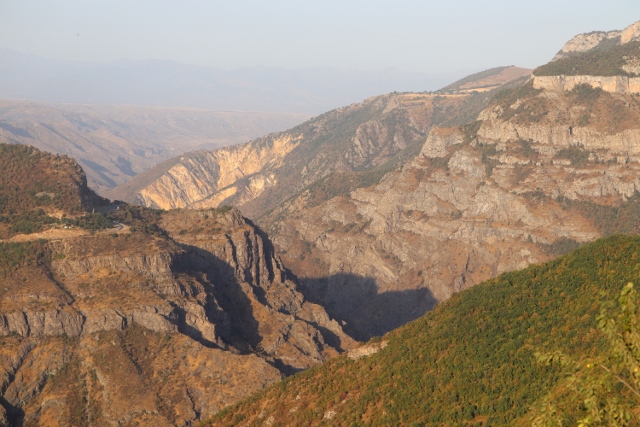 the landscape on the way back to Goris