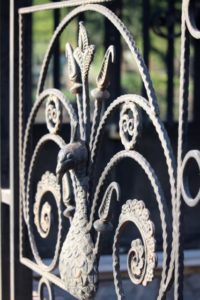 the peacock, Iran’s Royal symbol, on a fence of the National Library in Kerman

Not the most attractive town, not the friendliest either, and on top of that, almost everything of mild interest was closed.

Perhaps the first signs of fatigue start appearing. We have selected Kerman as the base from where to undertake several excursions – not that there is much choice -, but Kerman itself is actually not so interesting. The bazaar is nice, is even claimed to be the longest covered bazaar in the world, but we have seen more bazaars, and nicer ones, busier ones. One of the side branches is almost devoid of shops, everything bolted up. There are several caravanserais bordering the bazaar, but most of them are rotting away, are not being used, and have not been patched up. There are several mosques, but we have seen bigger ones, and more beautiful ones, more extensively decorated, more authentic, too. There is a elegant mansion in a garden, the Bagh-e Harandi, but the house has been heavily restored, looks as new – no more stained glass, no more wooden ceilings, no more pillared verandas. And the garden, well, is in fact a pomegranate plantation, probably providing some earnings on the side for the caretaker. You know, after having seen all those other architectural highlights, Kerman is perhaps second rate. Or perhaps we have seen enough of mosques, mansions and bazaars, by now. 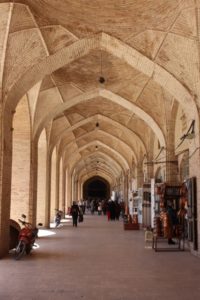 the covered bazaar of Kerman 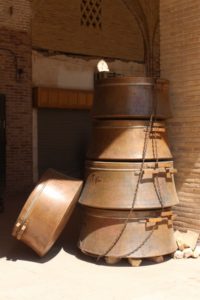 the bazaar is famous for its huge copper pans 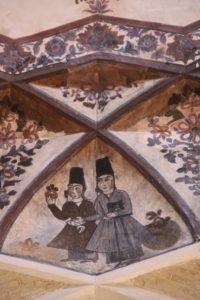 high in the main vault of the bazaar are some frescos 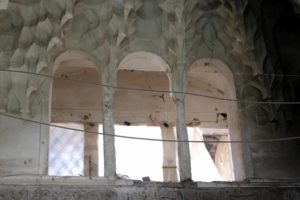 windows and stuc work in the bazaar 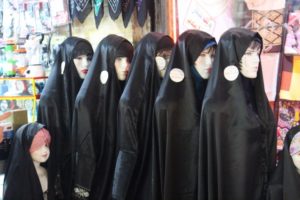 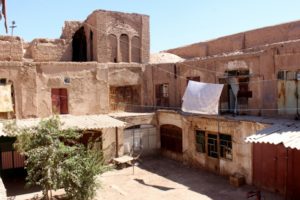 one of the caravanserais off the bazaar 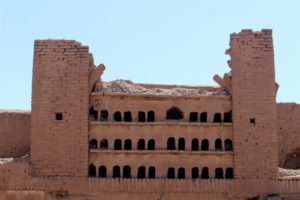 an old pigeon tower in one of the caravanserais 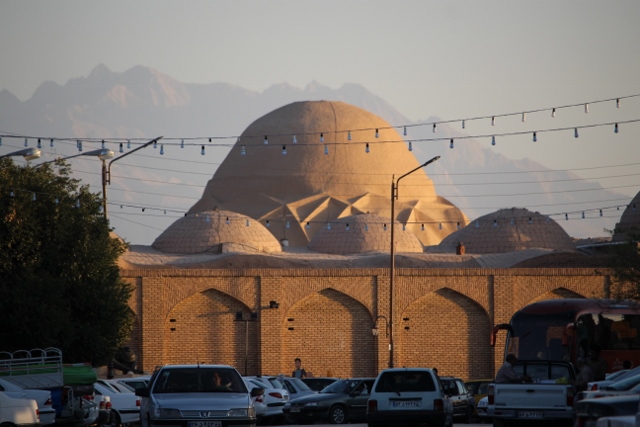 the dome of the central vault of the bazaar 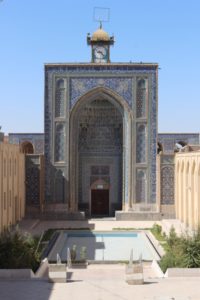 the entrance to the Jameh Mosque 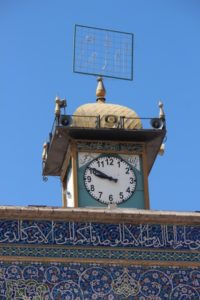 the mosque has no minaret, but a clock tower 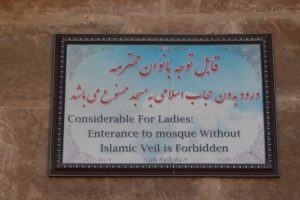 just to remind the women who want to enter the mosque 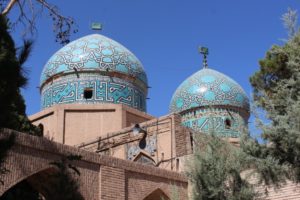 the Qajar-era mausoleum for a Sufi mystic, Moshtag Ali Shah

I had reserved some remaining hopes for a couple of promising novelties, but to no avail. The contemporary art museum, a novelty, because there is not much contemporary art that is being exhibited in Iran, was firmly closed, and didn’t look like it was to open soon. The National Library, described as a forest of colomns supporting vaulted ceilings: also closed, at 4 pm. My knocking on the door – I saw light inside – yielded a caretaker, who was not going to let me in, not even for a peek inside. Tomorrow, he said, which was a lie, because tomorrow is Friday, the weekend in Iran. And another intriguing building, an ancient domed ice storage building, equally abandoned. If you already haven’t got much in terms of sights, the least you can do is make sure that what you have is open, no? 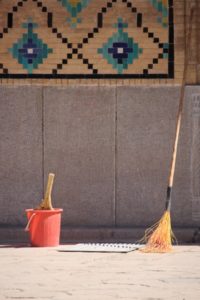 cleaning stuff in the mosque 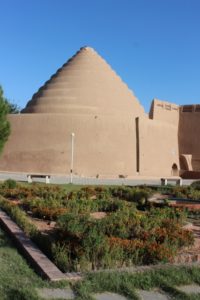 What was open, was the military museum, which displays an incredible array of different hand-held killing machines, as well as a detailed report about the Iran-Iraq war of 1980-1988, albeit with somewhat one-sided written commentary. And, separately from this, the Museum of the Holy Defense, solely about the war, with some bigger military equipment, and an outdoors recreation of the battle field, with trenches, barbed wire, shells, even recorded war sounds whilst you visit the Iraqi side. Inside, war memoriabilia, photos, letters, and very little English explanation. But that the war is still an important recent historical event, that much is clear. (Every town and village displays photos of his martyrs, even 30 years later; pictures of often awfully young boys, along the entry roads, or the main avenues.)

What doesn’t help either, in Kerman, is that the people are less friendly, less welcoming – something we have noticed already for a while, the further east we come. I don’t know whether this is because we are entering a different ethnic region, or that the higher density of tourists has something to do with it, but fact is that there is a different atmosphere here. Lots of young men in salwar kamiz, Baluchis from eastern Iran, or Afghan or Pakistani immigrants, or refuges? Maybe. We also see people, and small children, begging, quite un-Iranian. People stare – men stare at my wife, something we also haven’t experienced yet, in Iran, where most people are actually overly polite and well-mannered. A boy says ‘hello’, followed by something in Farsi that we don’t understand, but that seems to shock some of the bystanders. Probably an insult. Almost every taxi driver demands too much money, way to much money; by now, we are familiar with the rates, and we know what a taxi ride should cost, and so does the taxi driver, of course, but he still tries. We struggle to find restaurants, and the ones we find, aren’t very good. Fastfood is becoming the norm in Iran, but unfortunately the concept of a hamburger or a pizza is quite diferent from what we are used to.

We had hoped to spend some time in Kerman, quietly, take a break. But I think we’ll move on as soon as we can. 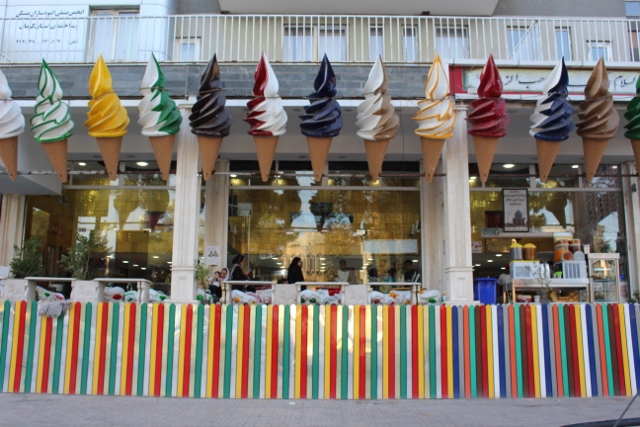 the only thing open in Kerman was this fabulous, not-to-be-misunderstood, icecream parlour