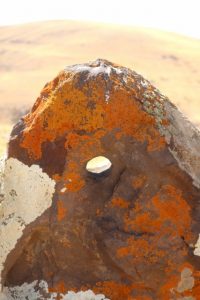 one of the mystical stones at Karahunj, just outside Sisian

The small town of Sisian, famous for its Armenian Stonehenge-equivalent, turns out to have many more intersting sites.

While we are is Sisian, we might as well check out some of the other attractions around town. We start with the local history museum, where, in the garden, we find that somebody, indeed, has carried some enormous boulders with petroglyphs down, from the Ughtasar site to the museum’s front garden – so much for the excitement of seeing these in situ. The garden also contains some sculpted goats, for good order decorated with crosses to make them look Christian, but they show a stunning similarity with sculptures we saw in Azerbaijan three years ago, in Nakhichevan. Inside, the caretaker lady needs to make a few calls before she is allowed to open the museum to us, and switch on the lights. She should not have bothered, the museum was not very interesting, and captions were mostly in Armenian and Russian. 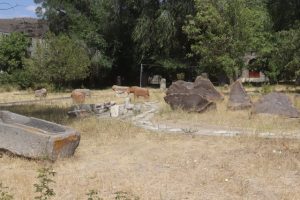 the garden in front of the Sisian history museum, complete with boulders with petroglyphs from Ughtasar 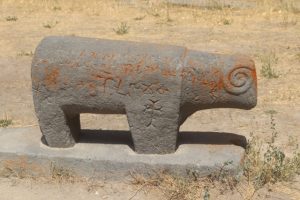 the other feature in the garden are the ram-like sculptures, like this stylistic example another of the sculptures 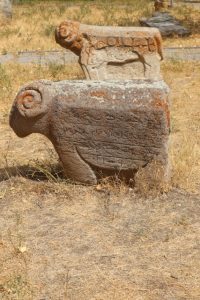 some of them decorated on the sides

The most famous site near Sisian is ‘Armenia’s Stonehenge’, called Karahunj (most likely Stonehenge in Armenian?). The official name of the site is Zorats Karer, a plateau covered with roughhewn basalt blocks, some of which form stone circles. Plenty of speculation about its origin and its function, from 4000 year old astronomical observatory to Bronze/Iron Age necropolis. The fact that many stones have a circular, clearly man-made hole in the top, which however is too large for serious night sky observations, makes it all the more mystical. And like Stonehenge, there is actually not much to see. 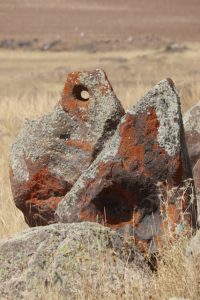 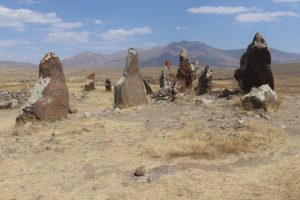 upright stones at the Karahunj site 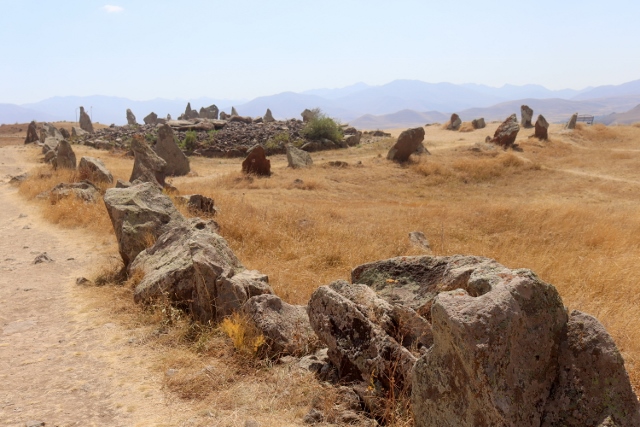 the circular lay-out of the stones clearly visible here 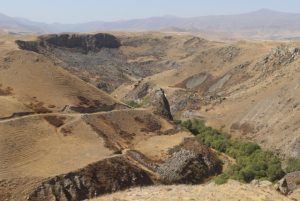 the countryside outside Sisian, dissected by gorges, topped by volcanics 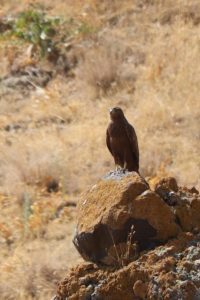 some life left in the countryside 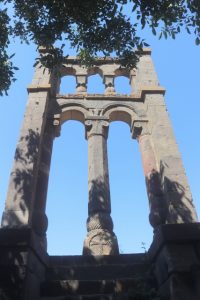 the funeral stele at Aghitu 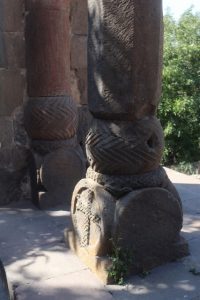 with columns nicely worked at the bottom 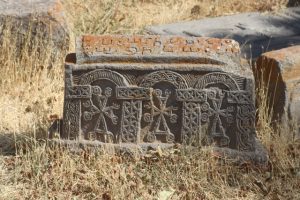 and carved tombs, not unlike Noratus 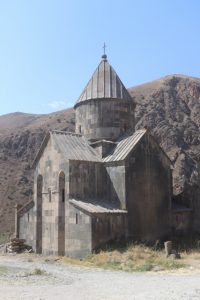 the church of the Vorotnavank monastery 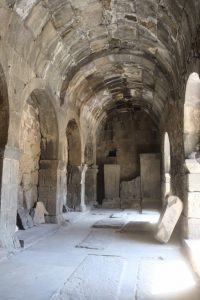 a partly open corridor of the church, with khachkars in the back 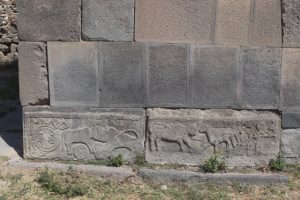 these look like tomb stones, incorporated in the wall 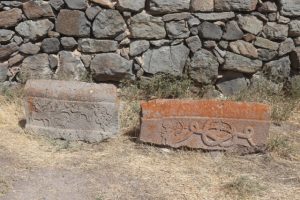 there are also plenty of free standing tombs

Because we have plenty of time, we also drive out to the nearby monastery, Vorotnavank, at the Vorotan River. On the way, in the village of Aghitu, we admire an apparently 6th or 7th Century funeral stele, of which very little else is known; but it looks interesting. The monastery itself is surprisingly nice – we thought we had had an overkill of monasteries, but this one, once more perched on a hill overlooking the river nearby, has somehow a very authentic feel over it, probably because of the lack of tourists: we are the only people around except for a caretaker. Legend has it that the earliest church here was commissioned early 4th Century by Gregory the Illuminator, he who brought Christianity to Armenia, which made it an important pilgrimage site. Later churches were built in the 11th C, with repairs carried out by Stepanos the Hermit in the 14th C, when the monastery was famed for its calligraphy, and for its snake bite treatment!

We continue along the road, in search for what locals call the Stone Symphony, an outcrop of basalt organ pipes. We don’t find the specific site we are looking for, but we do reach the small Melik Tangi bridge at the village of Vorotan, to which the background is being formed by similar hexagonal basalt columns. Always a nice sight.

Next: we are making our way back to Yerevan. 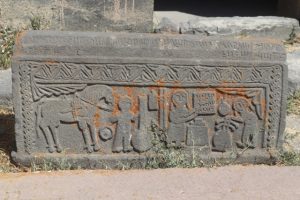 often with detailed scenes of life 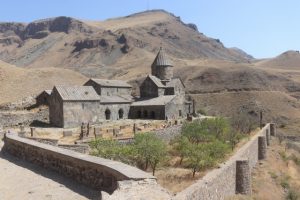 overview of the Vorotnavank complex 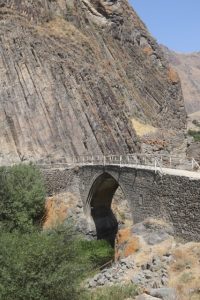 the Melik Tangi bridge in front of the basalt outcrop 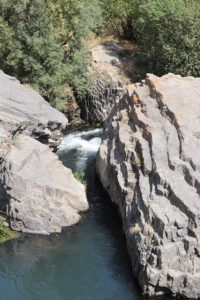 the Vorotan river, at the bridge 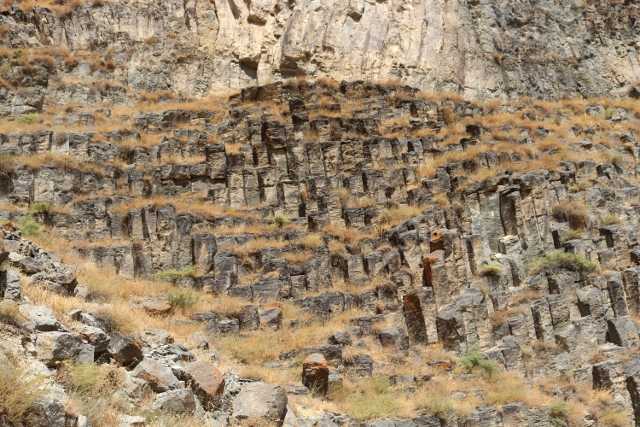 the tops of the basalt organ pipes 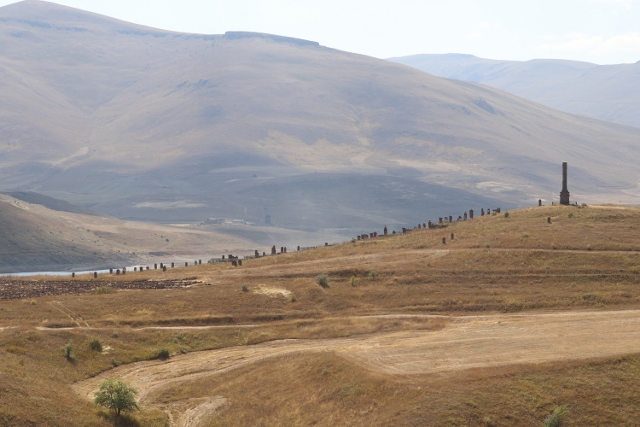 on the way back, a large cemetery in the middle of nowhere 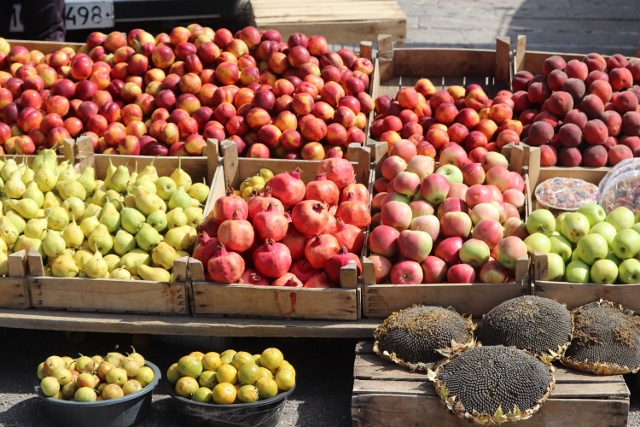 a bit of colour, from fruit stalls at the Vorotan pass