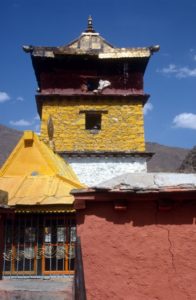 the Trandruk monastery in the Yarlung Valley

The birthplace of Tibetan culture does not only contain several interesting monasteries, but also a lot of Chinese army presence.

Tsedang is some two hours drive west from Lhasa airport. But it took us quite a bit longer, as we were immediately confronted with the peaceful presence of the Chinese in Tibet. The roads were blocked by hundreds of army trucks, yet, the soldiers were making themselves useful, working in the fields, rather than repressing the people. Or that is what it looked like, from the road.

Except for the army trucks, the drive through the Yarlung valley, along the Tsangpo River, is beautiful. White-washed square houses in little villages are equipped with prayer flags on all four corners, representing the five elements. Very simple, very peaceful, very picturesque. The village squares are often filled with newly made bricks, that are drying in the sun. Walls are covered with dung cakes, that are doing the same. They will provide the bulk of the fuel, as vegetation is sparse on the high Tibetan plateau. People are working the fields with spans of oxen, horses and the yaks typical for Tibet, decorated with colorful plumes, busily pulling heavy ploughs, and followed by the women sowing. People are very hospitable, but after having been invited inside several of their houses, the message is clear: these people are dirt-poor. Tibet in the 20th century. No, Tibet at the eve of the 21st! 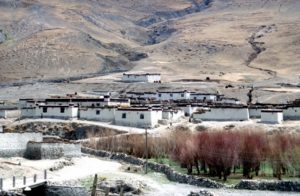 village in the Yarlung Valley 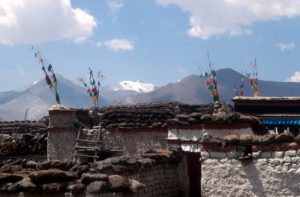 dung cakes drying on top of the houses

Our car was an old four-wheel drive Toyota Landcruiser, no airco, no frills. No seatbelts, either. However, we came to realize that having this low-key rental car was actually much better than the luxurious version Landcruisers, which all have darkly tinted windows, messing up the Technicolor views of the Tibetan landscape. Our driver did not speak a word of English, but was reasonably skilled. Our guide spoke a little more English, but not enough to engage in any meaningful conversation; her contributions remained limited to when the temples were build, who had build them and at what time we would be leaving the next day. But she was very sweet, and did everything possible to make our trip as comfortable as possible. 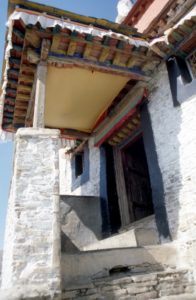 entrance of the Yumbulakhang monastery 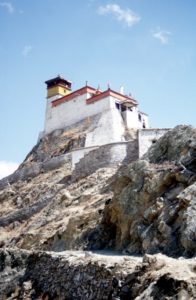 the fortress monastery of Yumbulakhang 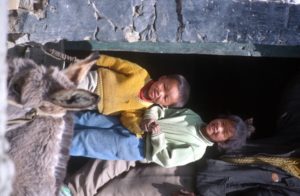 children and a donkey in a Yarlung Valley village 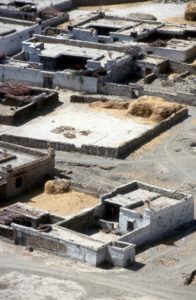 view of the village, from Yumbulakhang monastery

The Yarlung valley is the origin of the Tibetan culture, where, according to our guide, the first kings allegedly descended from the sky along a suspended rope quite some time ago, when exactly remains unclear. Where the rope was suspended from remains unclear, too. A number of, rather unimpressive, shallow hills are the tombs in which these first kings were buried, but what is more amazing is that the tombs, apparently, are still in tact, and have not been robbed and desecrated over time. I say “apparently”, because they are not open to the public, and it was actually unclear whether they had been opened at all. One of the disadvantages of a guide with limited command of English.

The valley also supports the earliest Tibetan Buddhist monasteries, which were founded in the seventh century, when the then ruling king, the formidable Songtsen Gampo, invited scholars from India. We visited two of them, starting with the fortress monastery of Yumbulakhang, perched high upon a cliff reachable by a steep walk only – not an easy task after one has just arrived at 3500 m altitude. Halfway the stairs we were spotted by a group of small children, who immediately started running down from the temple. When they started singing Freres Jacques, I suddenly understood why our guide had asked us whether we spoke French. They took us by the hand to help us up the steep climb, never mind that they were only one tenth of our weight, and obviously expected a reward for their support. No sweets, thank you, just money. inner courtyard of the Trandruk monastery 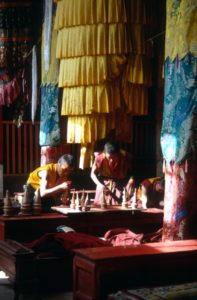 The second monastery, Trandruk, is in a village just outside Tsedang, located between normal Tibetan houses. It is much larger, and quite attractive, despite having been rebuilt almost entirely in recent years. Like the Yumbulakhang Monastery, it was severely damaged in the Cultural Revolution, when it was completely smashed up by Mao’s Red Guards. One of the more interesting places in the Monastery is the kitchen, the source of the many yak butter sculptures that are decorating every corner of every building. What nobody tells you about yak butter sculptures, is that they smell, and they smell badly. The kitchen is full of old butter makers, requiring hard work, but even in Tibet modernity advances. The yak butter production process has recently been speeded up by the acquisition of an electric blender, which proudly takes its place in the middle of the kitchen table. 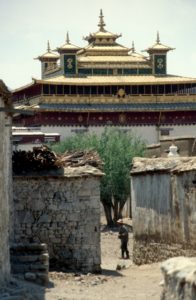 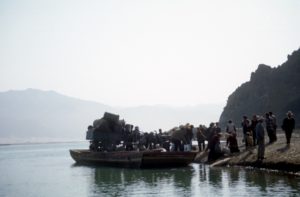 the ferry that brings us to the Samye monastery

The oldest monastery in Tibet, also in Yarlung Valley, is the monastery of Samye, which is reached by a one hour boat trip, in a flat, open boat that slowly navigates its way between the sandbanks of the Tsangpo River, followed by a half hour ride in the back of a truck – as long as the truck doesn’t break down on the bumpy sand track. However, the inconvenience of travel is rewarded once one reaches the monastery, inside a walled village. The monastery, with its dominant golden roofed temple, is a popular pilgrimage place; most visitor are Tibetan, dressed in their best cloths, colorful layer over colorful layer, with hair, both their own and fake fill ups, done in braids, and their body and face covered in jewelry. 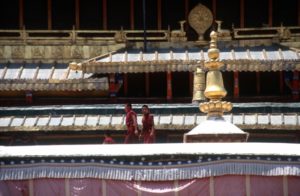 young monks on the roof of the Samye monastery 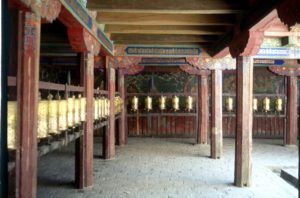 prayer wheels in the Samye monastery

Upon approaching Lhasa the army presence becomes even more stifling than in the countryside. Every other compound seems to be part of military barracks. Lhasa has all the hallmarks of an occupied city, despite the official enthusiasm of the Tibetans for the Chinese liberators. The only ones really demonstrating enthusiasm are the prostitutes, an obviously new aspect of Tibetan life, entirely geared toward servicing the army. In itself amazing, as most soldiers cannot be older that 17 or 18 years old, by the looks of it. 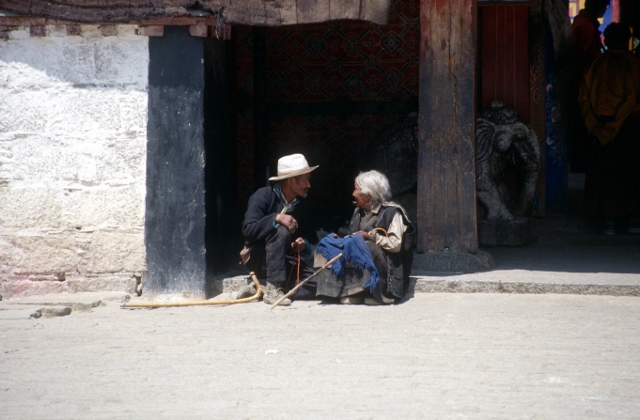 two people debating, in front of the Samye monastery