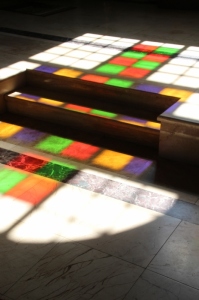 A quick visit along what is supposed to be the creme-de-la-creme of the Moldovan tourist attractions.

There aren’t any. Well, there are no tourist attractions to write home about, but I will attempt a few lights – cannot call them highlights. Not surprisingly, Moldova doesn’t have a tourist information service, and we didn’t have a guide book either, so information was internet-derived, only, Tripadvisor. Don’t believe it.

Moldovan landscape is lovely, rolling hills and the lot, but it is not very spectacular. And it is fairly monotonous – at least the part we saw, and I don’t expect huge variety elsewhere in this, after all pretty small, country.

Chisinau, I already discussed, doesn’t have a lot either, even though it is a pleasant enough town. So the real interest needs to come from the monasteries, of which Moldova has plenty. 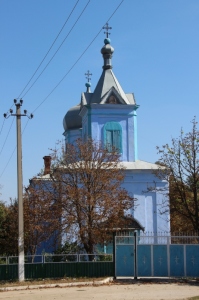 the blue church in a rural village 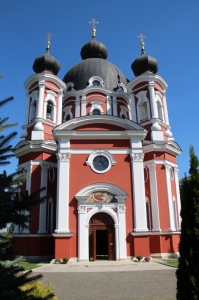 one of the churches of the Curchi Monastery 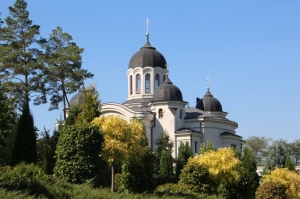 and the other one, also Curchi complex 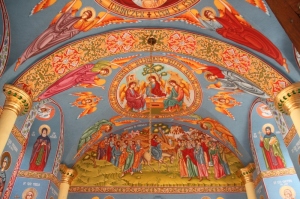 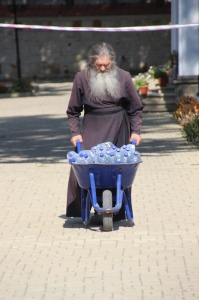 bring on the water, Capriany Monastery 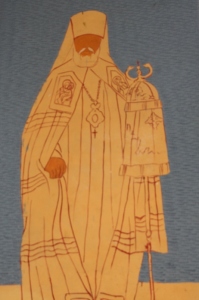 some of the frescos have been drawn, but not yet painted

To control the amount of driving somewhat, we had selected a few monasteries not too far away from Chisinau. Capriani Monastery was described as “one of the oldest monasteries founded in Bessarabia…. the last bastion of voivodal architecture in the Republic of Moldova, belonging to the Romanian cultural space”. Now, what else could you possibly want? Voivodal architecture or not, the monastery is heavily restored, and the churches in the complex newly decorated with fresh, bright-coloured frescos, some still to be completed. Not a lot of historical evidence, notwithstanding the obvious popularity of the place, attracting many visitors from afar on some kind of a pilgrimage – cars from Russia, Belarus, and even some busloads, albeit mini-busses. And the same counts for the Curchi Monastery, another lovely, landscaped complex that may, or may not, have a deep historical meaning, but not very visible. Again, everything well-maintained, newly painted – you know, not that interesting for the non-believing, casual tourist. Quite different from the Romanian and Bulgarian churches and monasteries we encountered earlier. 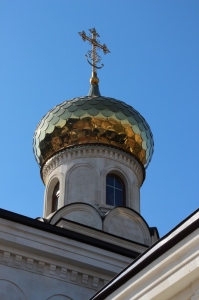 the church in Orhei Vechia 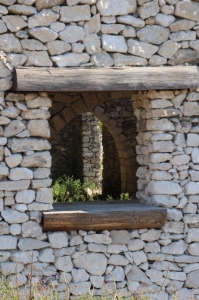 one of the barns near Orhei Vechia 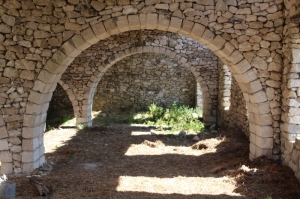 which is quite an attractive construction in itself

This left us with the biggest tourist attraction, Orhei Vechia, claimed to be a UNESCO World Heritage Site – even though it doesn’t appear on the UNESCO list. Perhaps by now we were a little cynical, perhaps we didn’t find half of the attractions – we never got to underground monasteries, or medieval villages -, but this complex was also a rather disappointing affair, the restored monastery, merely a church (closed, of course) with a wall around it, and a clock tower some distance away, admittedly located in a beautiful setting on a ridge overlooking the river valley. No infrastructure to speak of, there are some sign boards explaining the history, but others, explaining the next part of the history, have disappeared. No office, only a gift shop, which is abandoned. To their credit, the Moldovans have signposted this national treasure, from the motorway all the way to the site – the only tourist attraction signposted in the entire country. 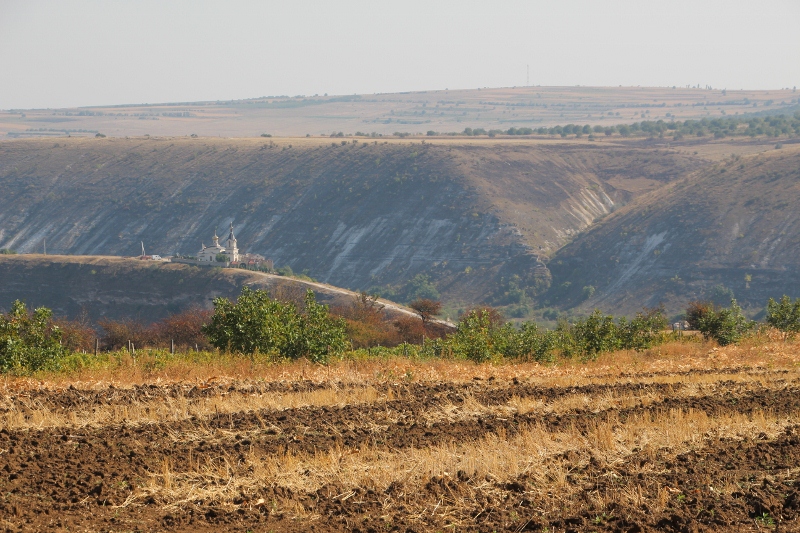 well, the setting of Orhei Vechia is spectacular

Is there then nothing worth our while, in Moldova? Wait, Moldova also has the second largest wine producer in the world, the Cricova Winery, which sports no less than 128 km of underground tunnels, where wine is produced, and, more importantly, stored; tunnels are hard to beat for constant temperature and high humidity. By the way, the largest wine producer, Milestii Mici, is also in Moldova, but is apparently less attractive, or has poorer marketing and public relations. Why Moldova produces so much wine? Favourable climate, and for a long time Russia as its main market, which took 80% of the annual production (until Russia decided to embargo Moldovan wine, and its market collapsed – although they claim that Poland has taken the place of Russia, it is difficult to imagine Poles drinking as much as Russians, individually as well as as a nation).

Right, Cricova, here we come! Well, not just yet, you first need to book your tour, for us the ten o’clock English-language tour. And pay upfront, in an office somewhere in Chisinau. Which we find, after having been directed from the Cricova head office, which was obviously the wrong office, to a bank opposite, which pointed to another office, across the street, which turned out to be next to the shop, where we were supposed to pay. 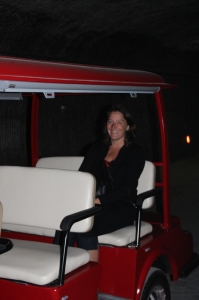 one of the haphazard tourists in our group, waiting for the train to depart 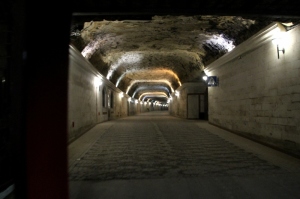 the tunnels in the limestone, part of the 128 km

Cricova is some 20 minutes drive from Chisinau, and is admittedly, the second tourist attraction that is well signposted, perhaps even better than Orhei Vechia the day before. We are the last ones to arrive, the rest of the ten o’clock tour is already on location, ready to board the open-carriage electric train – the type of train that is being used to transfer tourists at city events. What follows is absolutely amazing. The tour is utterly uninteresting, about how wine is being made, and who all has been here to admire the process, or store their personal collection of Cricova wine in the cellars. It actually took a while before we realized that we were, in fact, on the English-language tour. But the complex itself, cave after cave, linked by an intricate network tunnels, complete with road signs, right-of-way, pedestrian crossings and bicycle paths, some 80 meters below surface, the complex is quite something, even though we only see a tiny amount of it – in fact, only about 25-30% of the caves are used, at present. Funnily, the origin of the cave complex, obviously man-made, is never revealed, but I am pretty sure that it wasn’t dug for a winery. Mutterings about limestone building material aren’t that convincing. 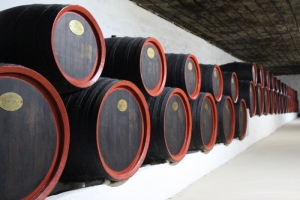 barrels lined up along the tunnels 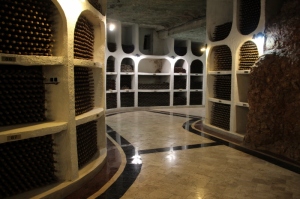 this is bottle storage for professionals these have been there for a while 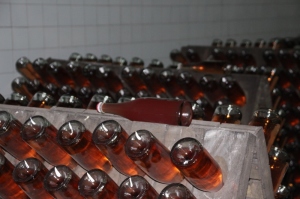 pink champagne, plenty of it 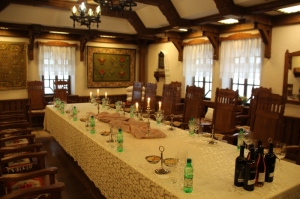 the tasting room in Cricova; note the ‘windows’, at 80 meters below surface

At the end of the hour-long tour there is the tasting session, like Romanian tasting you pay for a fixed number of wines, and no choice. The room, also 80 meters below surface, has windows, well, non-transparent glass behind which a few lamps have been placed, to create the impression of daylight outside. Really! The wines themselves? OK-ish, nothing spectacular, and again, like Romania and Bulgaria, contrary to expectation the better ones are not particularly cheap. We buy a few bottles; after all, we have by now quite a collection of personal imports.

After two days we have seen the place, and we return, back across the Prut River, into Romania. What a contrast, suddenly!

Next: back in Romania, the Bicaz Gorge and the Ceahlau Massif 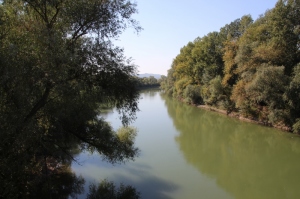 the Prut River, border between Moldova the country and Moldavia the Romanian province 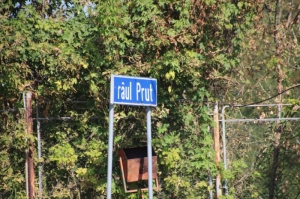 the Prut River, it is really called that way