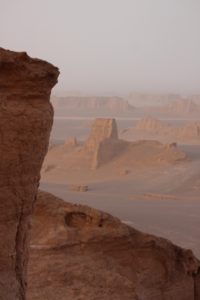 Apart from a few short trips out of Yazd and Kerman, we haven’t really explored the Iranian desert yet. A trip to the Kaluts changed that. Mustafa and Sakina run their own little tourist business, out of the hamlet of Shafi Abbad. Mustafa runs the car, with which he picks up tourists and drives them around, Sakina runs the small guesthouse where we arrived one late afternoon, for a surprisingly comfortable night’s sleep on matrasses on the floor. 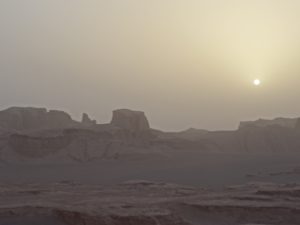 sunrise over the Kaluts, a little hazy 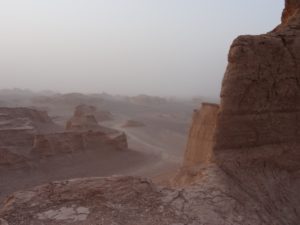 slowly, the Kaluts start to lighten up

The next morning at 5 am (!!!) we left to see the sunrise over the Kaluts. The Kaluts are steep sandstone mountains in the middle of the desert, eroded into irregular pillars by thousands of years of blistering winds, which has created a surreal landscape. The sunrise was not that spectacular, as the atmosphere was somewhat hazy, but the views of these enormous sand towers, slowly changing colours, was definitely worth the early departure. And we were almost alone, here – with the exception of a sun-worshipping woman who, as soom as the sun came up, went onto her knees and started whaling and chanting, meanwhile blowing kisses to the sun. Right. 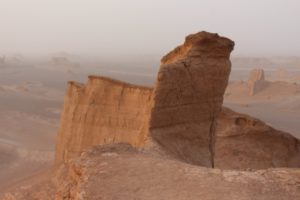 one of the higher rocks of the Kaluts 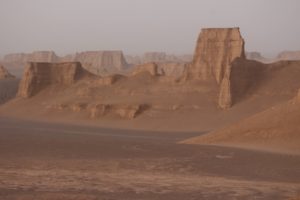 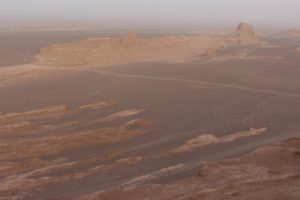 and this shows the dominant wind direction 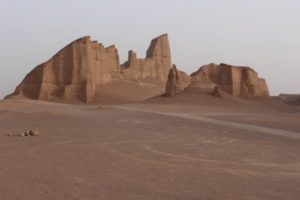 another one of the Kaluts 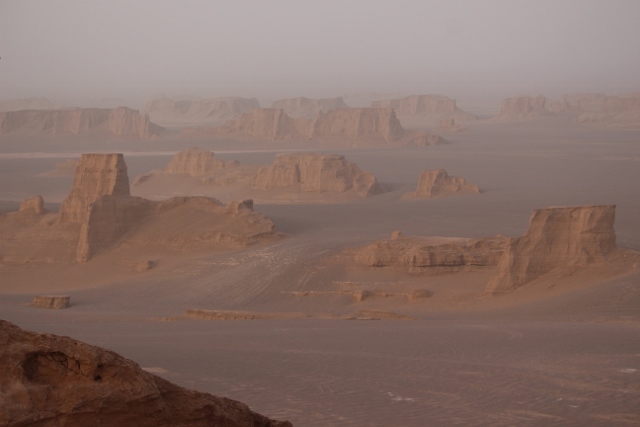 the view at sunrise 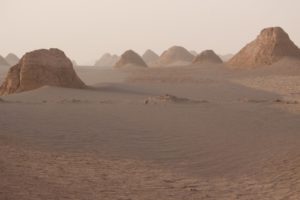 more sand remnants, these are called ‘the dolphins’ 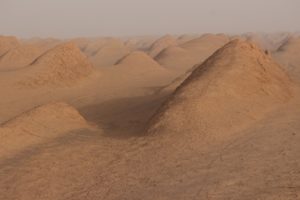 and they look like dolphins, all in the same direction

Driving on from the Kaluts, we passed a series of differently eroded sandstones, locally known as ‘the dolphins’, before we came to the Shur River. This is an underground river, but sufficiently close to the surface to moist the desert sand, and the bases of sand hills around. Much of the water has evaporated, creating huge mud cracks, whilst another part of the desert is covered with a salt crust; in some places we do find small pools of water, but also saturated with salt. A weird phenomenon, so in the middle of nowhere. 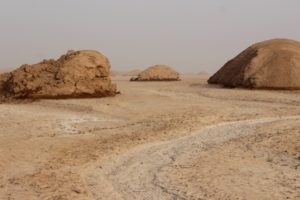 the Shur River, marked by a salt crust 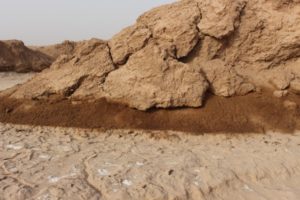 and note the moist base of the sandstone hills 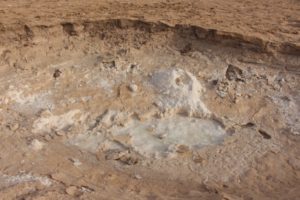 this is actually a water pool, among the salt 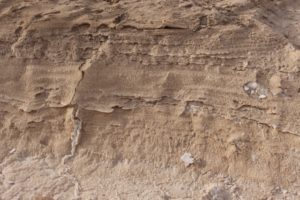 the salt has developed in quitea thick layer, in places 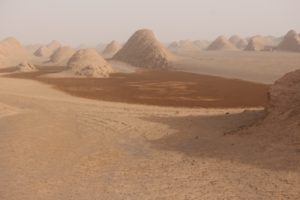 here a moist pool, also part of the river system 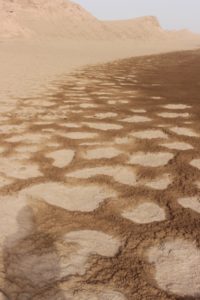 with at the edges the sand drying out again 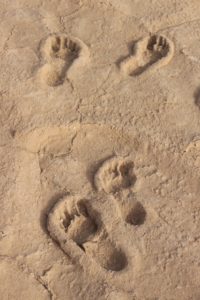 but not before somebody walked across – Lucy perhaps? 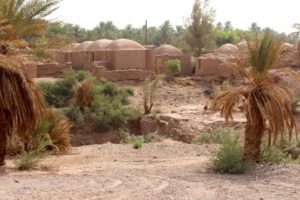 the village of Shafi Abbab 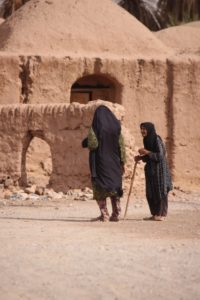 the women of Shafi Abbad – well, some of them

Back in Shafi Abbad we admire the village, and the caravanserai that is being restored. The most interesting part, however, is going down with Mustafa into the village’s qanat system, the age-old underground irrigation canals that have mostly been abandoned for modern equipment. Here in Shafi Abbad they are still being used, flowing very slowly on account of the minimal inclination these canals have been built with, perhaps 10-15 meters below the surface. 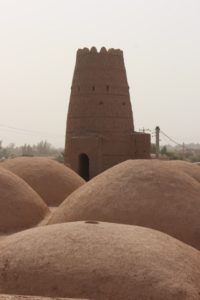 the restored caravanserai in the village 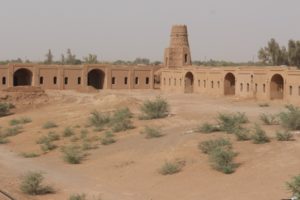 inside it is still rather empty 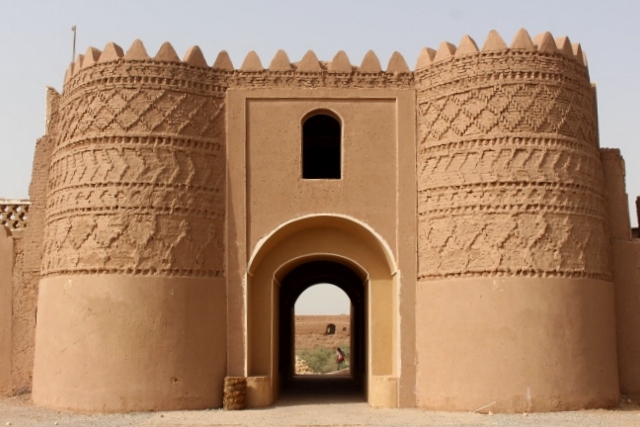 the imposing entrance gate to the caravanserai 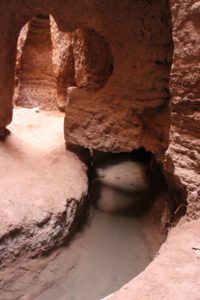 the underground qanat of Shafi Abbad 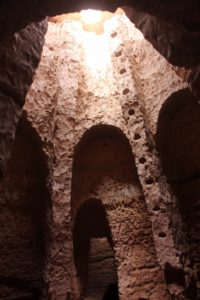 the qanat system has several holes to outside, for light and air, and for access 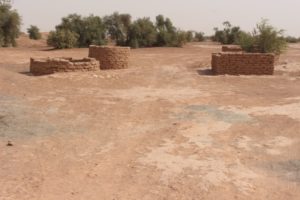 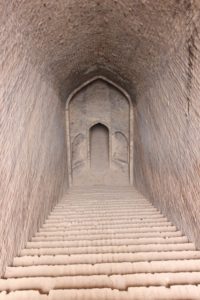 this is the entry to the ab anbar, the ancient water reservoir in Shahdad 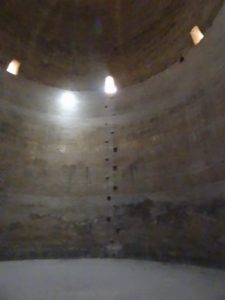 and this is how it looks from the inside, with steps for access from above 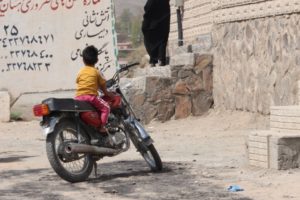 That water was of paramount importance is also clear in Shahdad, a larger town nearby, where we descend into the ancient water reservoir. An enormous stone tank has been built here, again 15 meters, maybe more, underground, where water used to be stored, presumably collected in the spring. Mustafa’s father still came here to collect his water, but these days it is no longer in use; running water from the tap has reached the desert, too.