(29) Travel to Kashgar (31) Across the Karakoram Highway 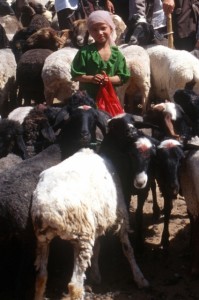 A look around Kashgar, an attractive town, with possibly the biggest market in the world.

The old town of Kashgar is very picturesque, somewhat elevated, with winding streets, lined with two and three-story buildings, decorated with arched balconies, all very un-Chinese. 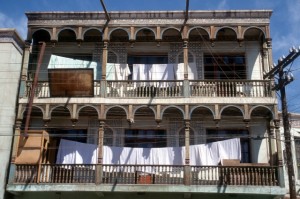 laundry on the balconies

The atmosphere is reminiscent of the Middle East, with small shops selling gold jewelry, embroidered prayer hats, flat breads and kebabs. Metal workers produce kettles in all shapes and forms. The only problem is the smell, everywhere, of sewerage, or rather, un-flushed toilets. Somehow, that smell didn’t go away when the water came back on. 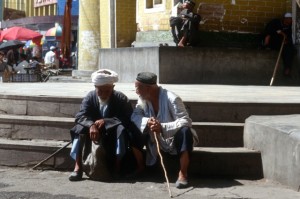 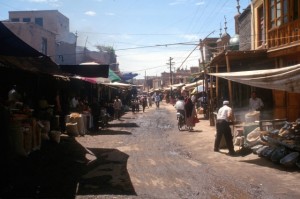 a random street in the old town 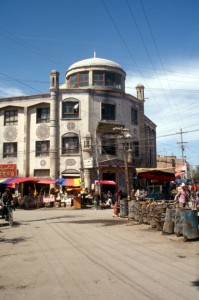 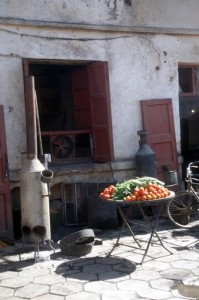 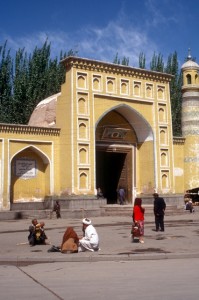 the main mosque in Kashgar 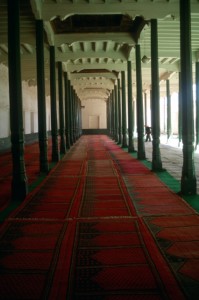 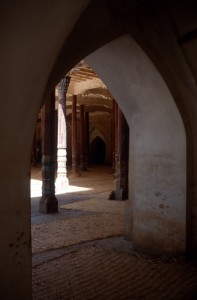 inside of another mosque 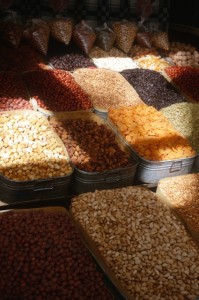 nuts and apricots in the market

The centre of town is dominated by a giant mosque. Large gardens inside form an oasis of rest and peace in the bustling city, but only until half past two on Friday afternoons. From then onwards the mosque is filling up with thousands and thousands of men, men only, all carrying a prayer mat, or just a plastic bag, and all having their heads covered, usually with a white embroidered cap which they may have bought outside. Music is provided by two men carrying a total of seven ghetto blasters, which are being switched on at three. This creates a slight, but only a slight sense of urgency amongst the men still outside. Businesses in front of the mosque will continue as long as possible. Especially the melon sellers have a field day, and will spend as little time as possible inside the mosque. Many worshipers stop at the melon carts either before or after the prayers, and the gathering on the square and in the mosque is as much a social as a religious occasion. And as soon as the prayers are over, it is market time again, the ones who closed up shop at the last-minute were out first, and had displayed their wares again before the masses streamed out of the mosque. Many others had decided to skip religion all together, for the sake of business, and had lined up outside with shoes, belts, elixirs (very popular!), or whatever you can stuff in a hold-all bag.

The new part of town is, as always, less interesting. A big Mao statue overlooks a large square and a number of small terraces that sell beer, a commodity clearly unavailable in the Uygur, Muslim part of town. The new town also has Chinese restaurants, but we were not the only customers. The one we chose turned out to be the celebration place for a group of eighth or ten Chinese, all conspicuously drunk, and very loud and noisy in the process. Luckily they left soon after we arrived, only to be replaced by the worst Karaoke ever heard, in one of the side rooms of the hotel. Did we hope for a power cut now, but it never came! Karaoke has definitely reached Kashgar, and the thing to do is to have a television on the pavement, outside, and a circle of chairs around it. This, as everything in China, is a commercial enterprise, you pay a nominal amount for a song, or two, or three, and when you have finished, somebody else takes over. And the whole street, the whole neighbourhood, enjoys free music. 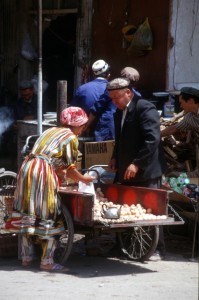 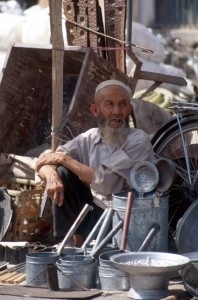 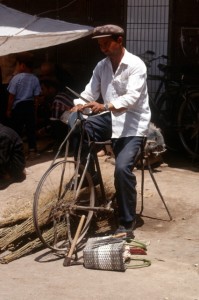 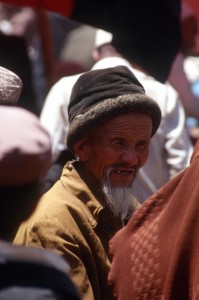 portrait of a Turkman, perhaps? 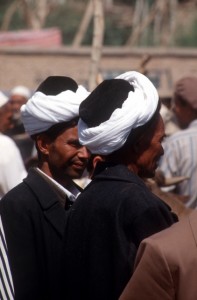 However, the main attraction in Kashgar, perhaps in entire Western China, is the Sunday market. Although I have previously described China as one big market, Kashgar beats all of that. There is a designated bazaar area, which has a more permanent nature and sells every day, from rows and rows of stalls, every type and colour of material, and every conceivable hat, thousands of them. Every Uygur seems to need a new hat. But on Sundays all streets leading to and from this bazaar area become part of the market, with stalls for vegetables and fruit, for household articles, plastics, cloths, a row of barbers practising their trade on the pavement, a knife sharpener operating a simple push bike design, and crowded food stalls at every corner. There are separate squares for the grain market, and for the absolute highlight, the cattle market. The entrance to this part is choked with sheep, and if you have finally fought your way through, you may be confronted with rows of cows, donkeys, goats, horses, and sometimes camels. The only open space is a narrow strip where the horses are test ridden, often in a way that ensures that the strip remains open! Some sheep have not survived the day and are being cooked in one of the many small restaurants that flank the cattle market, and that somehow absorb part of the sand and dust generated. By mid afternoon most dealings are over, and trucks, tractors and carts are driven on and off to ship away the acquisitions. Sheep are un-ceremonially hauled in the back. Smaller acquisitions are often carried off without dedicated transport, as the sounds emerging from some of the town buses suggest.

Next week the whole happening will be staged once more. Where they come from, all those people and all those animals, every week again, I don’t know.

Continue: Across the Karakoram Highway