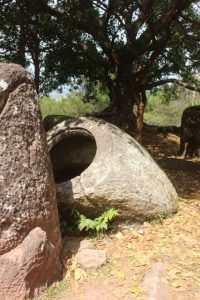 one of the vessels on the Plain of Jars

We finally made it to Phonsavanh, and the mysterious Plain of Jars, which is really the only attraction here, the rest being rather underwhelming.

We had bought tickets on the airconditioned VIP bus for the six-to-seven hour bus ride to Phonsavanh. The bus turned out a 25 seater, five of them fold-down seats in the isle, where the aircon was operated through opening and closing the windows. When we arrived in the bus station, almost all seats had already been taken, that is to say, had been covered with a plastic bag or a rucksack, indicating someone had claimed the place. Which, when the bus fills up, is no deterrent for Laotians, who casually remove the bag and put it on another seat. And then put their own bag down. As there had been too many tickets sold, everybody was ordered to leave the bus, with all their bags, and then boarding started all over again. Being big, and assertive, helps, at these moments. We had a comfortable ride, never mind that it took closer to eight hours to arrive. 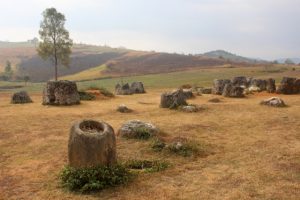 the idea of a plain, with scattered jars around 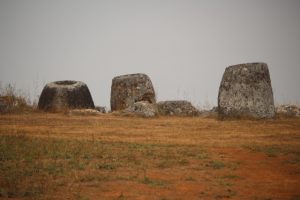 three jars on the first site 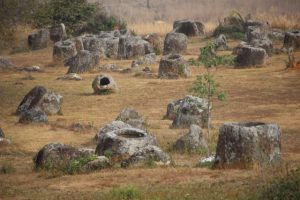 another view of site number 1 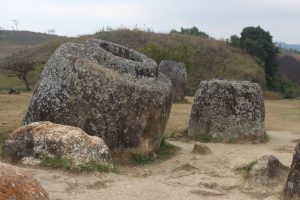 and this is one of the biggest jars around 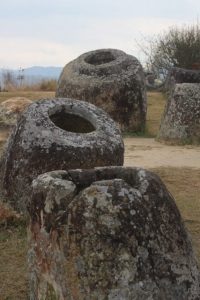 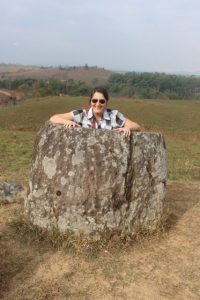 it says everywhere, ‘don’t climb into the jars’ – but it gives an idea about the size

Because Phonsavanh is so much of a detour, we had skipped it last time we were in Laos. The main point of interest here is what is called the Plain of Jars, which I had imagined to be a vast barren expanse of land, with outsized vessels scattered around. In fact, the areas open to visitors are three sites, fenced off and well-controlled. The first, and largest site has a small museum, and a number of groups of jars, some bigger, some smaller, and quite a few partly broken. The origin of the jars, probably dating from around 300 BC to 300 AD, remains the subject of speculation, although most people now seem to agree that they are funerary monuments, possibly for cremating human bodies and subsequent reburial of the remains elsewhere. The jars have been carved from local rocks, mostly sandstones and conglomerates, which must have been quite an exercise; it also looks likely that at least some have been moved uphill, which will have been an even greater exercise, as the biggest will easily weigh 10-15 tons or so. 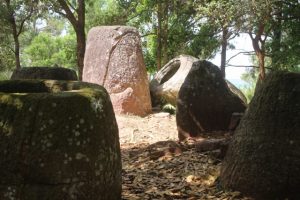 jars on the site number 2 hillside 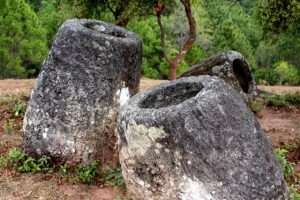 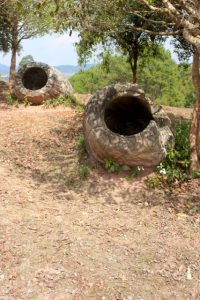 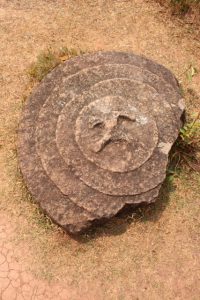 there are also a few carved plates around, which are, apparently, not the lids, but other burial indicators

The two other sites are a little further from Phonsavanh, and are in fact much nicer, as they as less developed, and less visited. Site number two has several jars on two separate hill tops, whilst to reach site number three involves a ten-minute walk through rice paddies to another hill, where a collection of jars is located under a group of trees; this is definitely the most atmospheric of the three sites, especially if you are there entirely on your own, without any other visitors. No regrets that we came back for this! 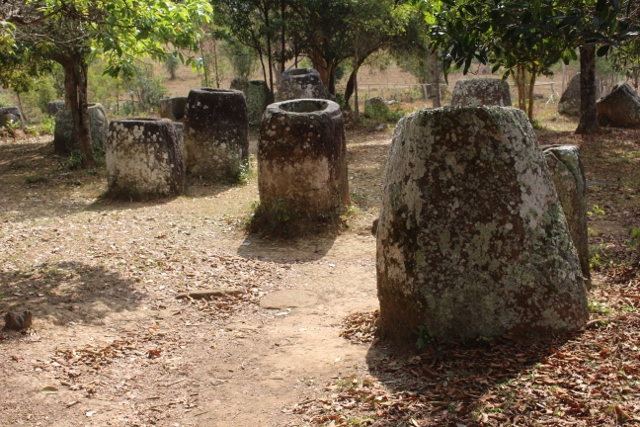 and the most atmospheric site, site number 3 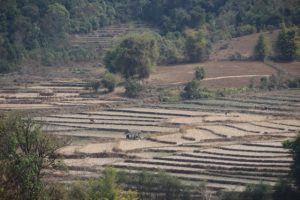 the surroundings of site 3 are also attractive, lots of paddy terraces 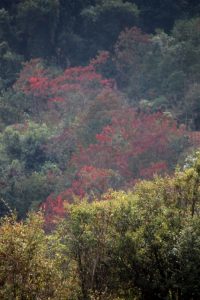 and some of the tree leaves coloured red all around Phonsavanh ammunition remains are used for decoration

Phonsavanh itself has next to nothing to offer. It is a new town, erected after the original place had been obliterated by American bombing during the Vietnam War – as was much of eastern Laos. Never mind that the country was not involved in the war, the Viet Cong used it to transport troops and weapons, along parts of the Ho Chi Min trail, south to infiltrate the enemy, whereupon the Americans and their allies decided to turn the place into a parking lot. It is estimated that between 1964 and 1973 Laos was bombed on average every eight minutes; when the campaign ended, a tenth of the Laotian population had died. But many more would suffer in the years after, from what is called UXO, unexploded ordinance, cluster bombs that have buried themselves in the ground and only slowly get back to the surface, where they are found by children, or stuck by farmers, either killing or maiming them. Even today large parts of eastern Laos are still not save, even now unexploded ammunition is still being found, sometimes by professional organisations, NGOs that specialize in clearing, sometimes by unlucky victims. 45 years after the war.

A small local NGO in Phonsavanh, QLA (Quality of Life Association), helps victims from UXO accidents, with access to medical services and protheses, small business loans and other initiatives to rebuild their lives. They have an impressive exhibition and video, and an attractive shop, along the main street. If anything, this is worth visiting when in town. 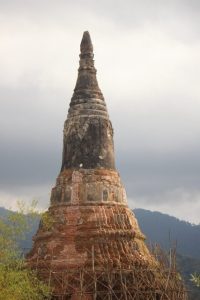 and an old stupa, now being restored, in Muang Khun 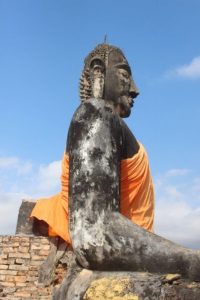 a Buddha sculpture as one of the scarred remains of the burned out old capital?

The tourist industry in Phonsavanh promotes trips to burned out tanks and airplanes, to parts of the Ho Chi Min trail, to war massacre caves. Not my thing. We visit what is now called Muang Khun, the old Phongsavan that was bombed, to look at the ruins. A new town has developed here; what is touted as ruins is rather underwhelming, a temple that is slowly being rebuild and a couple of stupas that are falling apart, even without suffering bombs. No need to stay any longer. 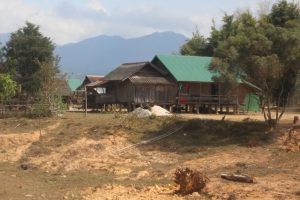 this is a rather rural area of Laos, lots of wooden houses 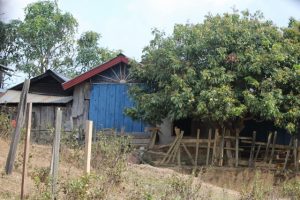 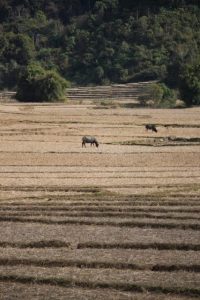 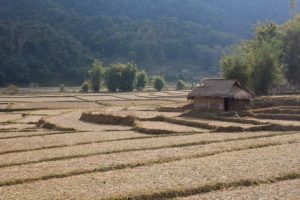 rice paddies and a small barn 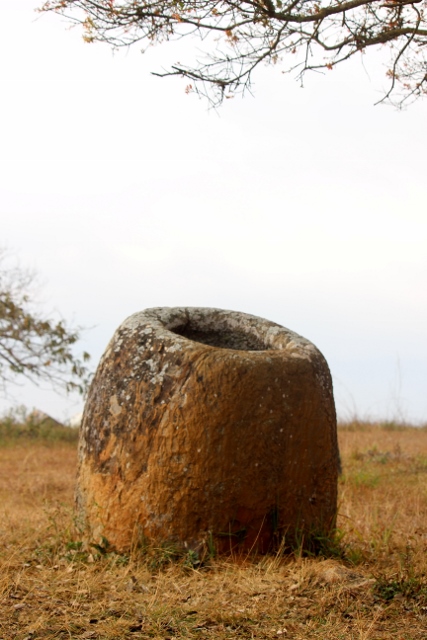 and I have to show you another one, the last jar