33. the painted monasteries of Bucovina 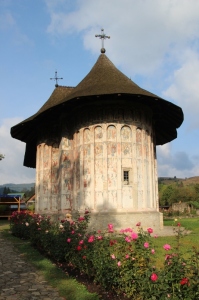 Humor church, the painted church of Humor monastery in Bucovina

The brilliantly painted monasteries of Bucovina, in Northern Romania, have been remarkably well-preserved, despite a long history. 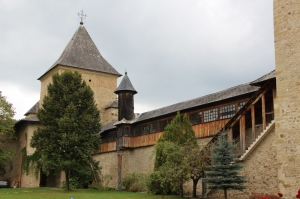 monastic buildings and tower of the fortified Sucevita monastery

One of the most striking tourist attractions in Romania are the Bucovina Monasteries, built and painted in the 15th and 16th Century under the patronage of Stefan the Great, the Romanian prince not only revered in Bucovina, but throughout Moldavia province and the rest of Romania, as well as the Republic of Moldova. In fact, we are talking about relatively small orthodox churches, inside a compound wall that forms the fortification around the monastery. The churches are spectacularly decorated with frescos, not only inside, but also – and unusually so – outside. The most quoted reason for the outside paintings is that the churches wanted to educate the illiterate populace, and crowds were far bigger than what fitted inside the church – which leaves the question why this method was not developed elsewhere, of course. (The only other example I know of is the monasteries around Lake Tana in Ethiopia.) 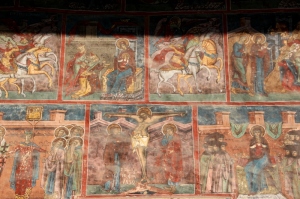 Humor outside frescos, the sun makes a difference 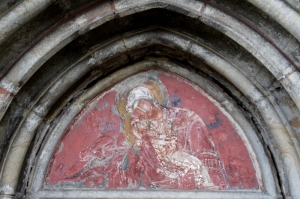 fresco above the door of Humor church 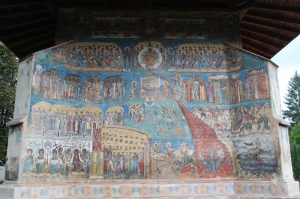 impressive Last Judgement fresco on the side of Voronet monastry church 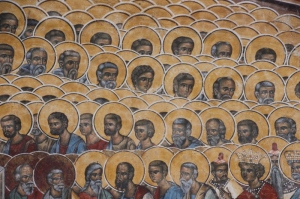 detail of the Last Judgement fresco, a crowd of icons, all-important people detail of frescos on the porch of the Humor church

Whatever the reason, the churches were painted on the outside, which was a rather tricky business. Teams of painters applied a fine plaster, and then had only a few hours to paint the plaster with pigments based on clays, minerals and semi-precious stones; once the plaster dried, it reacted with the pigments, creating the long-lasting decorations still clearly visible today. Each of the main monasteries claim to have a different colour – although, in all honesty, that wasn’t blatantly obvious to me -, the three most famous ones (Humor, Voronet and Moldovita) sporting red, blue and yellow, respectively, which, miraculously, also come back in the Romanian flag. Suggesting that this is a coincidence, is not done.

We were a little concerned that we would experience an overkill of monasteries, taking  a full day to travel to many of them, but the opposite is true. Each monastery is different, a distinct architecture, a unique interior, and its own external frescos, although obviously there is some overlap in the subject matter, like Bible scenes and Ottoman battles. The north-facing walls have suffered the prevailing winds and rain and snow, but the other sides are still in remarkably good condition. Even the 19th Century graffiti is still very readable – what is it that makes people write their names across someone else’s images? 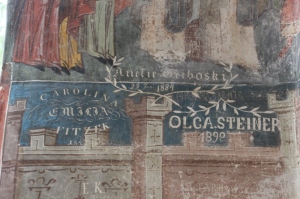 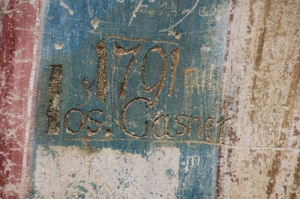 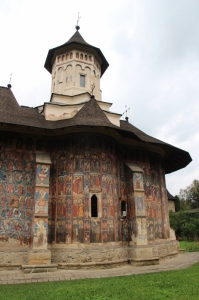 inside the Voronet monastery church

Even better are the inside frescos – but unfortunately inside photography is forbidden, which left me with the occasional sneaky shot only. Orthodox churches are decorated from top to bottom, so walls and ceiling, all the way into the domes, have been painted. In addition, intricate iconostases have been installed between nave and sanctuary, with multiple icons and paintings inside wooden frames.

The individual monasteries have been described in travel guides and on websites, so there is little I can add, save a few pictures, here and in individual entries of some of the monasteries (to allow for even more photos), which do not even start to do justice to the experience of visiting these remarkable monasteries for real.

my favourite: Siege of Constantinople (Moldovita) 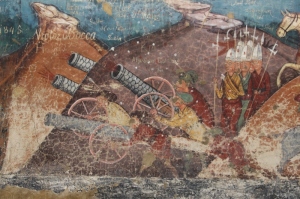 detail of cannons in Siege of Constantinople (Moldovita) 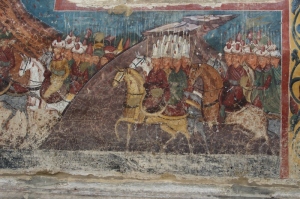 detail of horsemen in Siege of Constantinople (Moldovita) 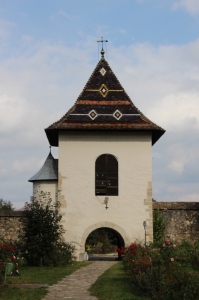 the tower of the Solca monastery 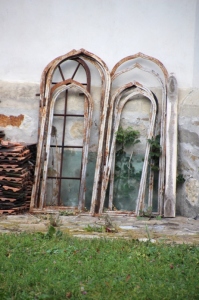 church windows in the back, waiting to be restored (Solca)

We went to see the small Humor monastery, the equally small Voronet Monastery – which indeed is overwhelmingly blue -, the Moldevita Monastery – with my favourite fresco, the the siege of Constantinople -, and the much larger Sucevita Monastery, as well as the less impressive Solca Monastery and Tower, all UNESCO World Heritage sites. Follow the links to the monasteries for more photos.

Next: next to Bucovina is Maramures 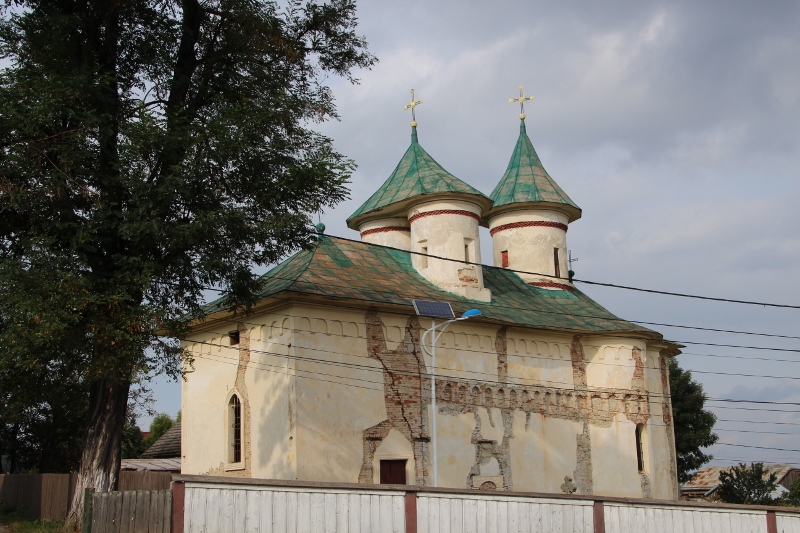 church in the village of Cipriam, just outside Suceava