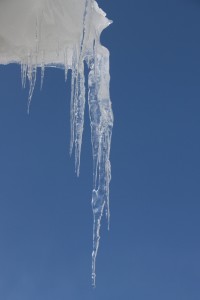 ice slowly melting on the Bazardera Pass, off trhe Pamir Highway near Alichur

Continuing down the Pamir Highway from Murghab to Alichur, we encounter plenty of distractions, from rock paintings to adventures at the highest passes 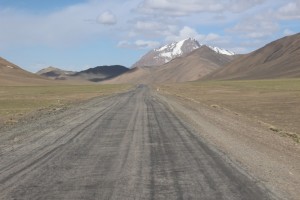 the plateau country of the Naizatash Pass, an almost unnoticable rise

Past Murghab, the Pamir Highway continues west, mostly across a 4000 m+ plateau, a wide expanse of gravel in which we occasionally recognise the Alichur river. There is a pass to cross, the Naizatash Pass at 4137 m, but you hardly notice this, the road climbs gradually, no hairpins or anything like that, and then descends again, equally gradually. All the time we are flanked by higher mountains, of course, which provide a dramatic backdrop to this section of road. 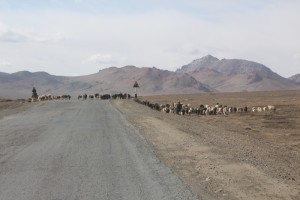 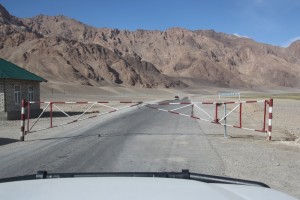 the check point for the GBAO permit

Just outside Murghab is a checkpoint, where our GBAO permit is inspected, and we are registered – for what, I don’t know, I think it is highly unlikely that anyone ever looks at that registration again, but he, this is how it has always been done. 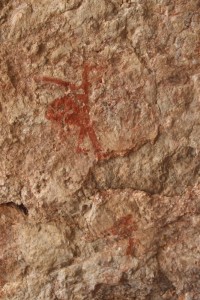 one of the paintings in the cave 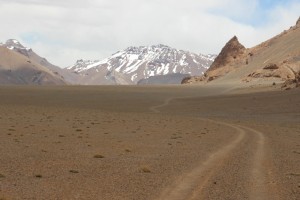 off the road, towards the Shakty Caves 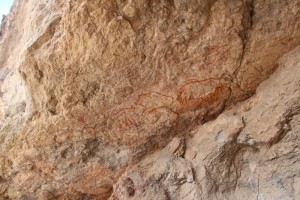 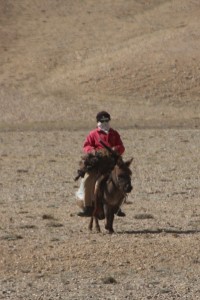 we do meet some traffic 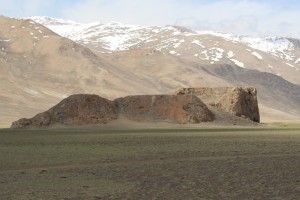 this is called Chatyr Tash – tent rock -, one of the tourists stops along the road…

A little further on we turn off the Pamir Highway, to reach the Shakty Cave, where as far as I know – guide book knowledge – the only rock paintings of Central Asia have been encountered. And indeed, after we have scrambled up a slope, we get to a small cave, fenced off to protect the delicate, fragile paintings, fragile because the rocks on which they have been painted is about to crumble from erosion. The paintings themselves only cover a small area, the cave being not that big, and in all fairness, I have seen better ones. Here only one scene can be recognised, three animals being hunted, in monochromatic red, with perhaps some vague figures at the side. The most striking thing is that there are, apparently, no other paintings in the area, unusual because in most other areas that contain rock paintings, there are multiple sites. 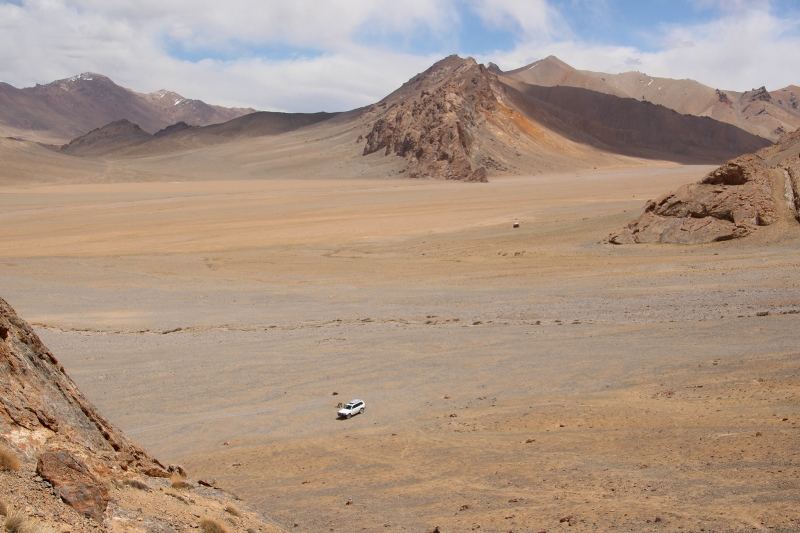 the view from the cave, as it was thousands of years ago, too – minus the car, of course 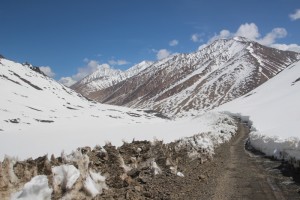 the road up the Bazardera Pass, cleared of snow 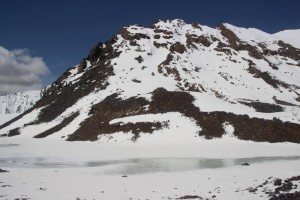 at the pass, a frozen-over lake 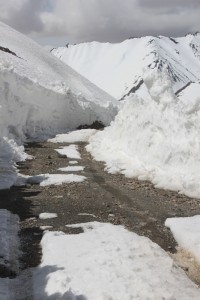 another view of the road, snow walls on the side 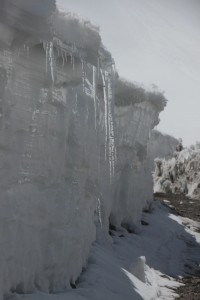 where the ice has been pushed away, icicles have developed 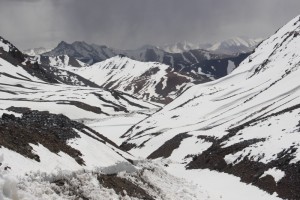 the view from the pass, at 4664 m the highest point of our trip 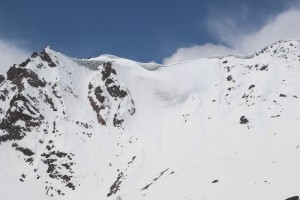 snow ridges on the surrounding mountains, against the blue sky 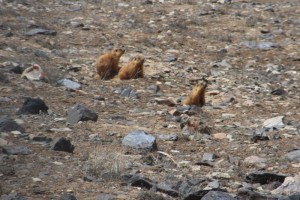 marmots popping up from their holes

Not discouraged, though, we decide to visit a site of petroglyphs, distinct from rock paintings in that these are not done with pigment, but have been scratched in the rock, further along the highway, in a place called Ak Jygla, close to a ruined caravanserai of Silk Route times, called Bazardera. In order to get there we followed a road up a 4664 pass, the Bazardera Pass, which led to a silver mine that has been active since the 11th Century, their last and current custodians being a Kazach company. The mine must be good business, because the road was in remarkably good condition, and cleared of snow. And providing spectacular views of the mountains on both sides of the pass, quite something else from the gravel plateau down below. The higher we got, the thicker were the packages of snow and ice along the road, another beautiful sight.

We never reached the petroglyphs, neither the caravanserai. Ten minutes past the pass we got stuck, on a large slab of icy snow that had not been cleared. Four-wheel drive became four-wheel spin. It took us a good 45 minutes to get the car clear again, jacking it up high and stuffing rocks under the tires. Which is hard work, at 4600 m! So we returned the same way, back to the highway, without having reached our target, but what a fabulous experience it was, nevertheless. 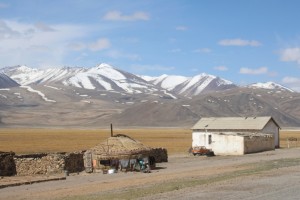 And if that hadn’t been enough, we had fish for lunch, in Alichur. Fish in a landlocked country (and Uzbekistan, Kyrgyzstan and Tajikistan are all solidly land-locked) is a rare treat, but here they come from the river, that tiny, humble stream that has been following us across the plateau. Nice change from the usual menu. 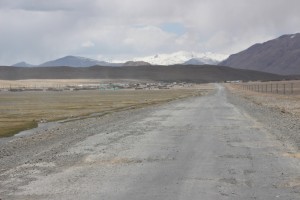 Alichur, next to the Pamir Highway 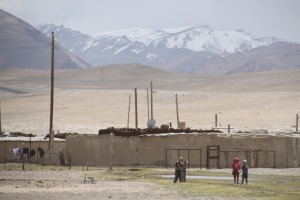 Alichur doesn’t look different from any other village here 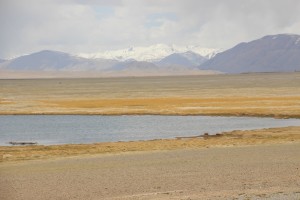 and this is where the fish comes from