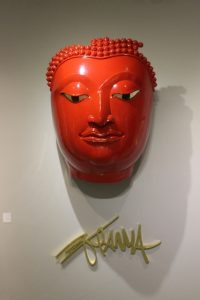 mask on the wall of the Khao Yai Art Museum

Pak Chong, another town in Thailand’s Isaan region, has quite a few unexpected attractions to offer.

A couple of hours further down the railway line is Pak Chong, another conveniently located city in Isaan. This was going to be our base for exploring the Khao Yai Nature Reserve. But as it turned out, there was more to discover in and around Pak Chong.

We were not a little surprised to find out that the area around the Nature Reserve is also Thailand’s primary wine production area. Thai wine? Indeed, and no less than three wineries are located in the vicinity, the small family-owned Alcidini winery, the oldest and largest in the area, PB Valley winery, and the latest addition, and reputedly best one, GranMonte. Now I know that I have stated that I won’t have any South East Asian wine anymore, after the experiences with the disastrous Yunan Red and other Chinese wines, and the Vietnamese Dalat series (not to mention the Cambodian wines we tried eight years ago!), but, well, the opportunity presented itself, what can you do? 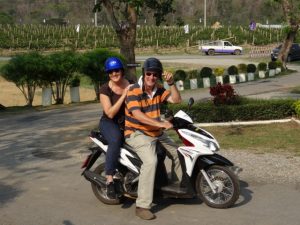 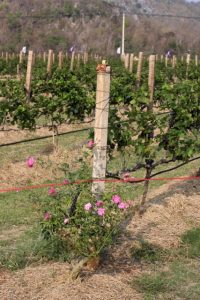 including roses as early warning system 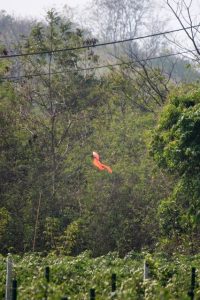 and kites to scare off the birds 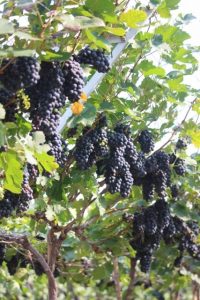 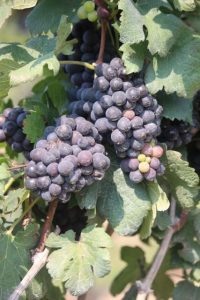 in the bright sunlight 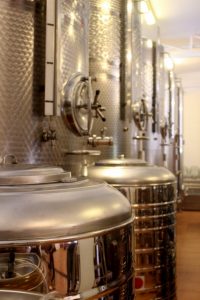 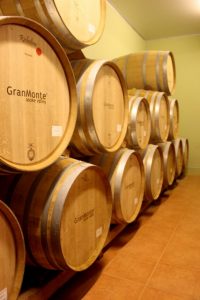 next to oak barrels

So we rented a scooter – at least, we have moved up from the bicycle business – and travelled the 45 minutes it took to get to the GranMonte estate, initially jut to have lunch. But soon somebody came to offer us the tour, which would start at 2 pm. She helpfully checked with the kitchen, who agreed that we would have been served our lunch well in time not to miss this specific tour. So we relented.

At two o’clock we presented ourselves at the tour departure point. We were the only ones, and we would be the only ones for the rest of the day, so much was clear. Monday afternoon in the low season. Yet, the tour had to start at two, not five or ten minutes later. Zero flexibility, this is Thailand. So we settled in an electric cart with space for 20 people, our guide picked up the microphone – even though we, the two of us, were sitting right next to him -, and off we went, on a round through the estate. It was a week before the harvest starts, so the vines were full of thick bunches of grapes, which were mostly pretty small. About half of the grapes are Syrah, and another 30% Chenin Blanc, leaving not a lot on the 60 hectares for other varieties. Everything – except harvest – is automated here, from sensors that measure soil conditions to triggers that initiate the automatic irrigation systems (I know, I know).

Of course, we were mostly anticipating the last part of the tour, all the estate and wine making process mumbo jumbo we have heard before. And here we were pleasantly surprised: they actually make quite acceptable wine in GranMonte, from a reasonable Verdejo and a light rose from Syrah to quite decent mature blends of red. Its just that, with a starting price of close to 20 US$ per bottle and their flagship Asoka well over 100 US$, this is never going to be a successful export product. 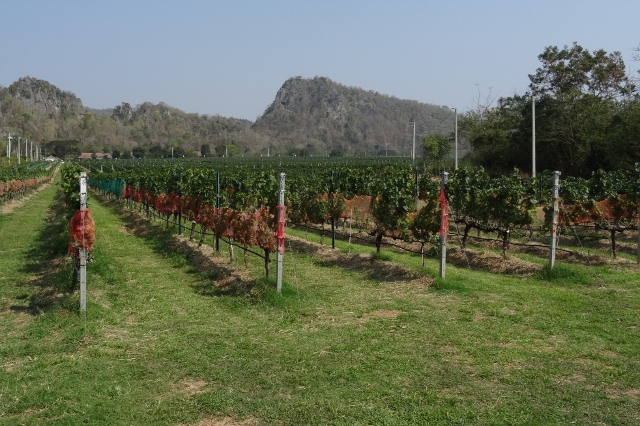 the vineyards of the GranMonte winery 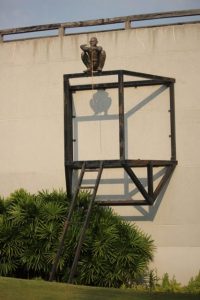 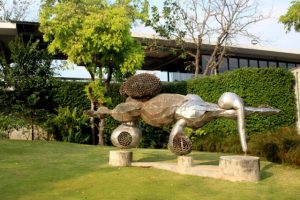 another sculpture, with the museum at the back 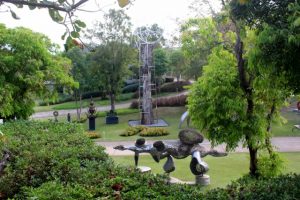 and a view of the sculpture garden

On the way back to Pak Chong we stopped off at the delightful Khao Yai Art Museum, a large villa with three rooms of paintings. One of the rooms is entirely dedicated to images of the young new King, and perhaps lacks some variety of subject matter, and the other two contain contemporary Thai works of art, of some variety. The real gem, though, are the corridors and garden, and every corner outside the gallery rooms, which are stuffed with sculptures, many of which are quite nice indeed, and definitely original. 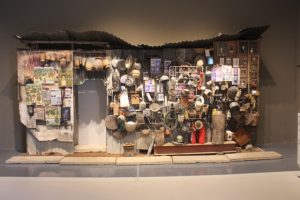 inside, one of the original art works 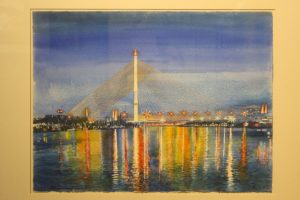 as well as more classical styles, a water colour

Back in Pak Chong, in our search for food, we encountered the night market, which presented a delightful selection of stalls, all serving yet something else again, from grilled pork to pancakes and fabulous fresh fruit. You could do worse for dinner in Thailand!

You see, a day filled with totally unexpected attractions. The beauty of traveling.

next is the Khao Yai National Park, for hich we came here, in the first place 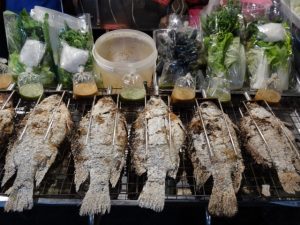 grilled fish in the night market 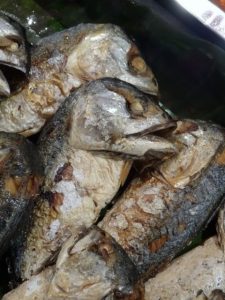 and some peculiar fishes, too 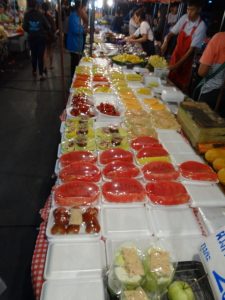 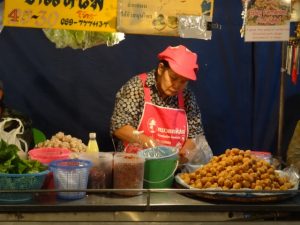 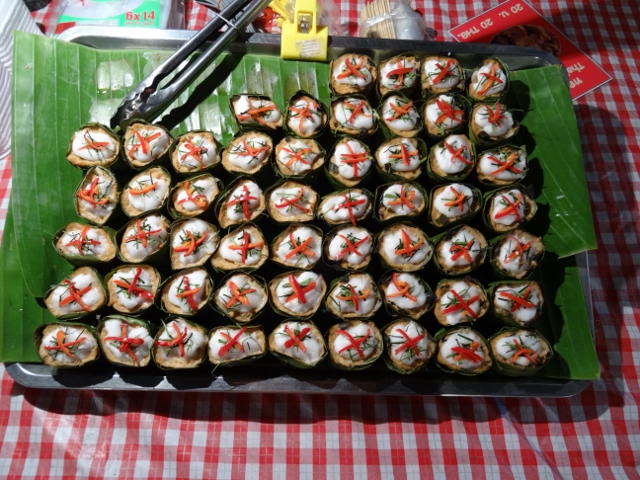 and you have all those things you have never seen before!!! 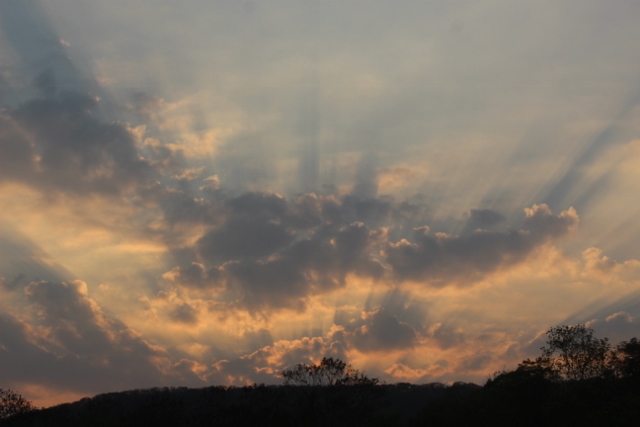 and from the balcony of our room in Pak Chong