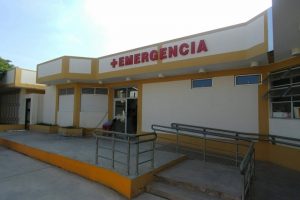 the emergency ward of the Nasca hospital

A brief intermezzo from the tourist spots, a visit to the hospital of Nasca is nevertheless a cultural experience

For the last few days I have been suffering from, let’s say, loose bowels, which is not only inconvenient because of its uncontrollability and its unpredictability, but also hampers progress in the comparative analysis of pisco sours. More bluntly, we haven’t had a pisco sour yet, since we arrived in Peru.

Loose bowels is an inevitability during our sort of traveling, and usually it lasts a day, max. two days, but after four days I get a little worried, so we decide to consult the local hospital in Nasca. We enter the emergency section, where I am fairly quickly being attended by a nurse, who takes pulse, blood pressure and for completeness sake my weight and height, and tells me I have to be seen by the doctor. But first I need to register, and buy a consult. Registration is straightforward: somebody writes my details, including weight and height, in an enormous ledger, and then copies the details only a patient form, which I need to take to the doctor. After paying first, of course, at the cashier.

The doctor listens briefly, then writes down three tests, two on the blood and one stool. And tells me to go pay for the tests, at the cashier again, and buy equipment, like syringes, in the pharmacy. The syringe costs 30 cents, the stool sample container 45. Armed with equipment and receipt we wander through the hospital, until we find the laboratory at the other end. Stool sample will have to wait – the bowels aren’t that loose, after all – but blood can be taken, not with my newly bought syringe, that one disappears in a drawer, but a standard one from the hospital. Results in an hour.

After and hour, with results in hand, back to the doctor, who finds nothing wrong, and is about to send me away, when he decides that I am dehydrated. Tongue? Yes! He scribbles VIF on a random piece of paper – VIF is Spanish for intravenous drip -, a stamp and his signature, and sends me … to the cashier. With yet another receipt back to the doctor, who gives me a prescription. I have to go and buy the intravenous liquid in the pharmacy. But I first need to pay – yes, at the cashier. With an arm full of bottles I move to another desk, where a nurse – the first person who smiles in this hospital, well, smiles a bit – puts me in a chair, brings in the drip, and then puts me on a bed. This is going to take a while. 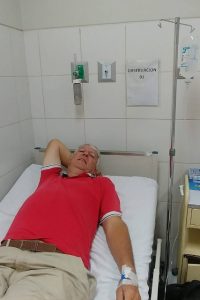 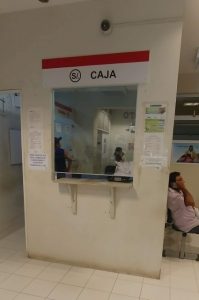 the window where all payments have to go through

In the mean time playing children run through the corridors, a woman obviously in pain can’t stop screaming, people walk in and out. There is no privacy here, and very little organisation, it looks. But it works. Although nobody seems to enjoy their work very much, the atmosphere is, well, as in a mortuary. After a bit more than an hour my third and last bottle is empty, and I suggest that I can now leave, right? Wrong. First the doctor needs to see me again. It takes a while, and I am dreading the renewed confrontation with this rather uncommunicative man, but it turns out that he has gone home, and in his place another, female doctor is on duty. The first pleasant person in the whole episode, she decides that all these tests were rubbish, and prescribes antibiotics instead. For which she writes a prescription, which we need to present at the pharmacy, and then pay first, of course – the cashier again -, and that is it. Well, almost, I also need to pay for two hours of hospitalization, the grand sum of 2 US$, at the cashier. Who, finally, after seven times, manages to write my name – admittedly not the easiest for a Peruvian -, correctly, without asking.

next: fully recovered, in Ica 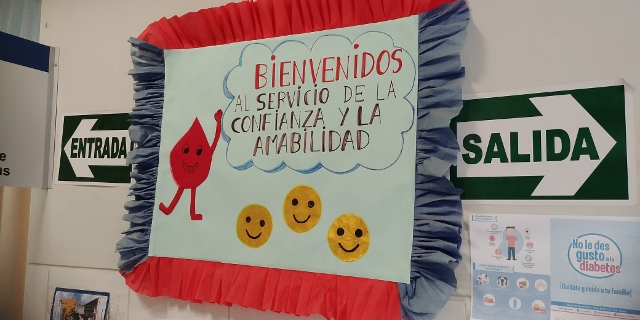 on the wall of Hotel California: welcom to the service of trust and friendliness

One Response to 38. the hospital