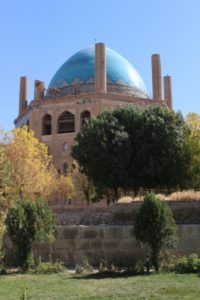 the Oljeitu Mausoleum in Soltaniyeh

Several historical monuments in the vicinity of Zanjan are well worth visiting, like the Takht-e Soleyman and the Oljeitu Mausoleum; so is the beautiful mountain scenery.

When we drove from Hamadan to Bijar, we drove for two hours through absolutely deserted landscape, with only very occasionally a very small village in sight, until we reached Bijar. When we left Bijar again, we soon returned to the middle of nowhere: nothingness all around. But in its nothingness, the countryside was actually very attarctive, something that has been somewhat lacking in Iran, during our travels. 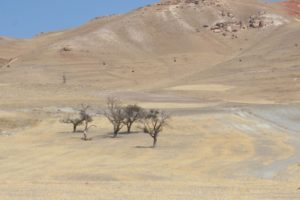 the nothingness around Bijar, and on the way to Zanjan 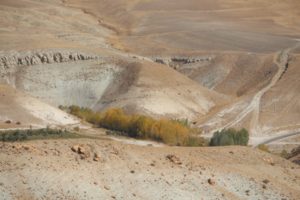 some autumn colours provide distraction from the grey mountains 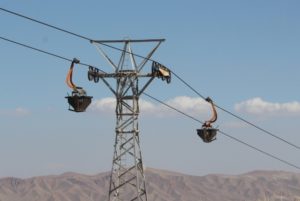 a lot of mining going on in this region, with long cable car lines

We were on our way to Zanjan. Zanjan itself hasn’t much to offer, but it is a good base for visiting a couple of important historic sites. The first of those is the, or Solomon’s Throne. Not that this ever had anything to do with the Biblical King Solomon: the reason that there are so many references to Soleyman (remember Cyrus’ tomb, but also a hill top in Tajikistan and numerous other places throughout the Middle East and Central Asia, which the man is unlikely to have all visite Takht-e Soleyman), the reason was fear for destruction of non-Muslim holy places by the conquering Arabs in the 7th Century and afterwards. So in quite a few areas the local population concocted a story related to Soleyman, knowing that he was recognised by Islam, as well. The Takht-e Soleyman was in fact a Zoroastrian fire temple, of which most of what is visible today was constructed in Sassanid times, around 1500 years ago – but the temple itself may have existed for much longer. Today, several building ruins remain, and some restoration has been going on (and judging from the scafolding, may still continue). The location is quite attractive, on top of a hill, around a small lake which derives its water from an underground spring. 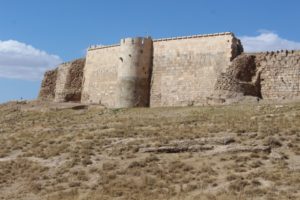 the partially restored walls of the Tahkt-e Soleyman 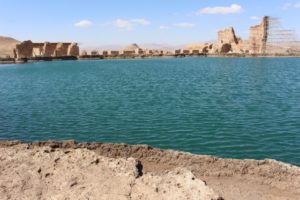 the lake in the centre, with the buildings around 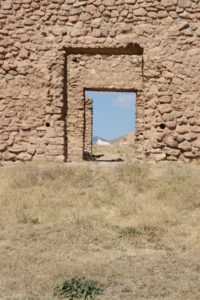 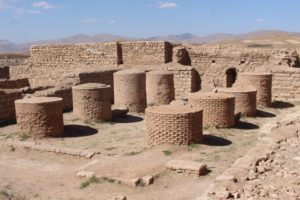 this is, officially, the room with four columns – beats me why 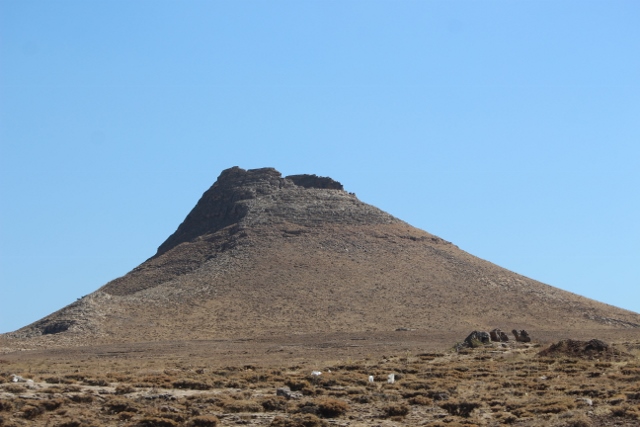 Nearby the throne is the prison, also Solomon’s. Zendan-e Soleyman is in fact a small crater, with the remains of some buildings on the slope. Whether it ever was a real prison, is unknown, but the stumble up the slopes to the rim of the crater, made easy for most of the way by stone-and-concrete steps, was nice enough. And the closer we came to the rim, the stronger the smell of sulphur. We couldn’t see any water down below, but apparently there is a small lake at the bottom. 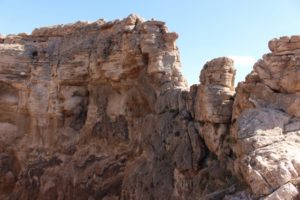 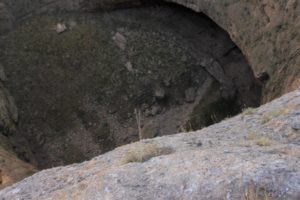 and the crater lake, although there is little water, it looks 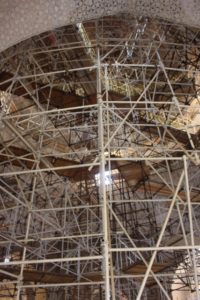 the extensive scaffolding inside the Oljeitu Mausoleum 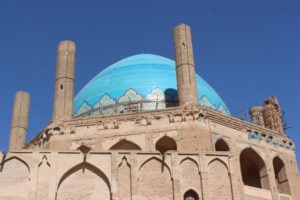 the dome of the mausoleum, with its tiles restored 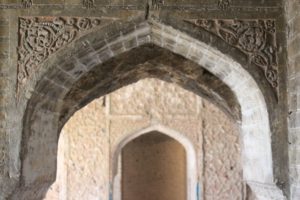 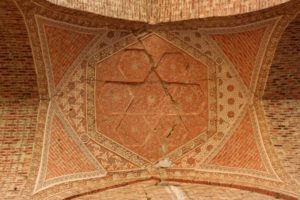 ceiling of one of the second floor outside chambers 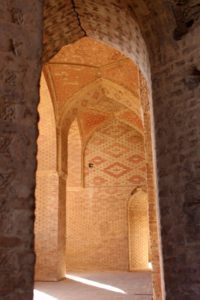 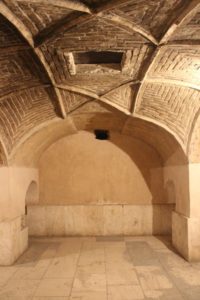 the cellar – what would you do with it?

The second historical monument is on the other side of Zanjan, in the village of Soltaniyeh. The Mongol Oljeitu Khodabandeh decided to build a mausoleum here for Iman Ali, Mohammed’s son-in-law, but when he failed to convince the clrerics in Najef, where Ali is burried, he had himself burried here, instead The mausoleum is surrounded by a range of other buildings, most of which have largely collapsed, but the mausoleum itself is still standing, albeit with the help of extensive scafolding inside. The octogonal, domed tower is, or so say the guide books, the tallest brick dome on earth. At ground level are several niches, differently decorated – although much of the decoration has faded, or fallen off. One of those niches leads to a prayer room, not very interesting, but also has steps down to the cellar, now empty – but I would know very well what to do with it!

Stairs also lead up, to an inside gallery on the first floor, and an outside gallery one floor higher. All, once again, extensively decorated, although, except for the parts that have been tastefully restored, much of it is in a bad state. Still, it is an intriguing building, obviously not only recently being restored, but, judging from the different ways of decorating, also in the past having received upgrades, frescos stuccoed over for instance. 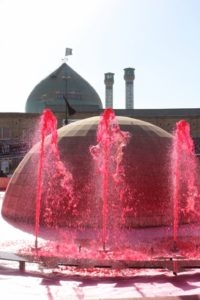 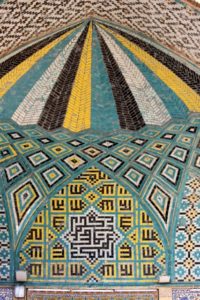 one of the mosques in Zanjan

And Zanjan itself?  Still in the ban of mourning, even two days after Ashura. With as special attraction the fountains, of which the water is red-coloured, presumably meant to look like blood. But the museums were open, of which the laundry museum (really) was not massively interesting – a large underground room from the 1920s, constructed to facilitate public washing of cloths and of children. The archealogical museum, however, did have a small collection of well-presented artefacts, plus the Salt Men. There are a total of six bodies discovered in a salt mine nearby, which have been almost perfectly preserved thanks to the salt. The curious thing is that these bodies have been dated to quite different times, from, say, 300 BC (Acheamenid) and 500 AD (Sassanid) to even later, suggesting that the mine has been worked over a rather long time. But the mummified bodies are quite something, skin and hair, and cloths still clearly recognisable. (One of those we saw earlier, in the Tehran Museum.) 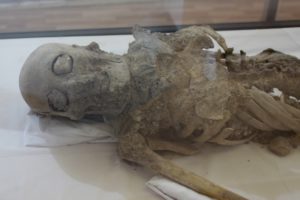 one of the salt men mummies 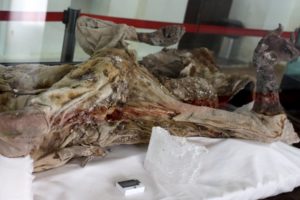 and another one, still almost fully dressed 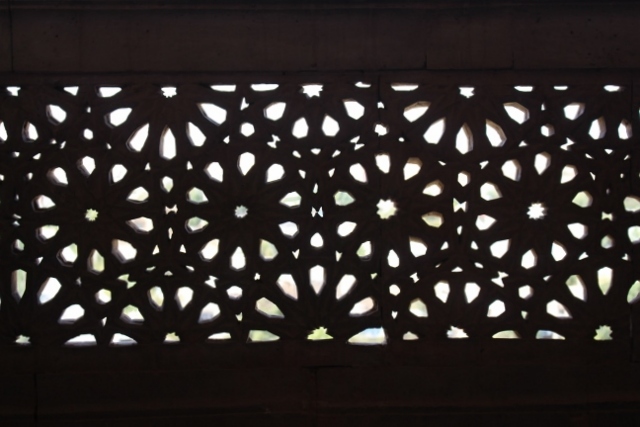 a balustrade in the Oljeitu Mausoleum