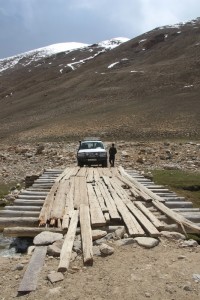 one of the rickety bridges in the Shakdara Valley

Exploring Khorog’s attractions, further down the Whakan Valley, and adventure travel to the high ranges of the Shakdara Valley 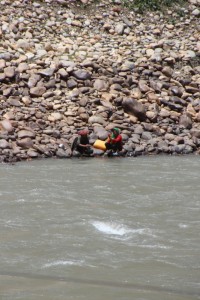 two Afghan women on the far side of the Panj River

Further down the Panj River is Khorog, about two hours drive from Ishkashim. The scenery is much the same, quite densely populated on the Tajik side with agricultural villages following each other one by one, whilst the Afghan side seems a lot less developed.

Khorog itself is a pleasant small town, with even some traffic lights that serve a purpose, except that they are universally being ignored by the drivers, despite the omnipresence of police in the streets. Monday morning, there is even a bit of a traffic jam, around the market. In the centre of town are two important elements, a very nice park, with leafy paths and a pond where the youth comes swimming, and an Indian restaurant, which provides some change of diet – although many dishes have a strong, and rather un-Indian, tomato ketchup flavour. 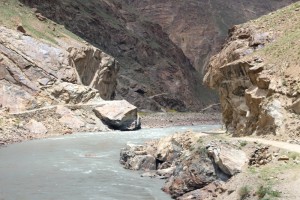 the Panj River, border with Afghanistan 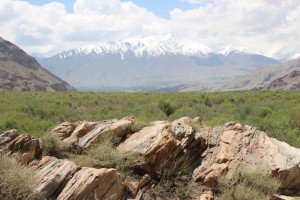 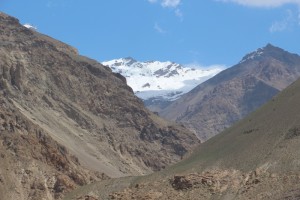 a farm complex, Afghan side 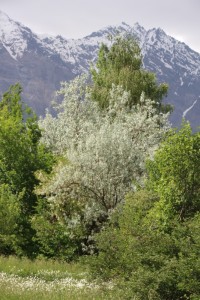 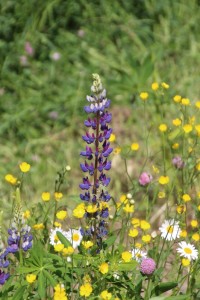 contains some nice flowers, but is mostly overgrown

Just outside town is what is proudly touted as the second highest botanical gardens in the world (the highest is, apparently, in Nepal). The gardens are rich in floral variety, and very nicely laid out, with several small buildings, fountains and pergolas around, but as we have observed so often already during this trip, no maintenance to speak of. The park is overgrown, no attempt is being made to even cut the grass, and buildings are destroyed by out-of-control plants that climb through the windows and the roofs. Wooden stairs are about to collapse, and none of the fountains have water. Most of the signs naming the species are unreadable because of rust. A pity, really, this could be such a nice place. 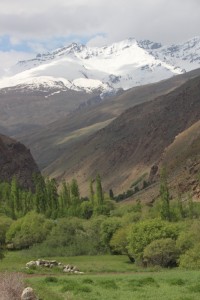 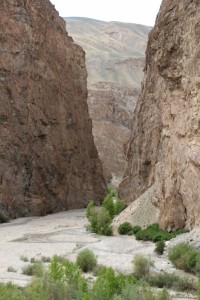 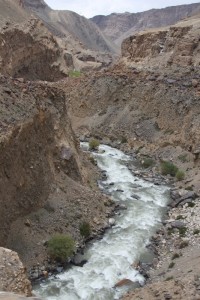 the Shakdara river, far below the road 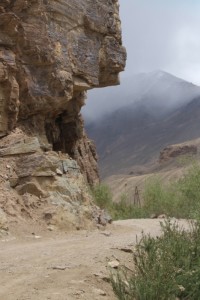 the road occasionally hewn out of steep mountain walls

We had an extra day in Khorog, and the plan was to drive up the beautiful Shakdara Valley, and over the 4228 m Maisara Pass, to join the Pamir Highway back to Khorog. Piece of cake really. The lower part of the valley is much as the Wakhan Valley, lots of small villages and lots of agriculture, but soon we get a little higher; sometimes along the river through deep gorges, and sometimes the road climbing up high above the water, following a narrow ledge. We cross the river several times on rickety wooden bridges, every next bridge seemingly more rickety. Further up, well over 3000 m now, the valley widens again, and the economy changes more and more towards pastoralism, with largish herds of cattle and sheep, and some yaks. We have left all the trees behind, and we are entering the typical High Pamirs plateau landscape again. 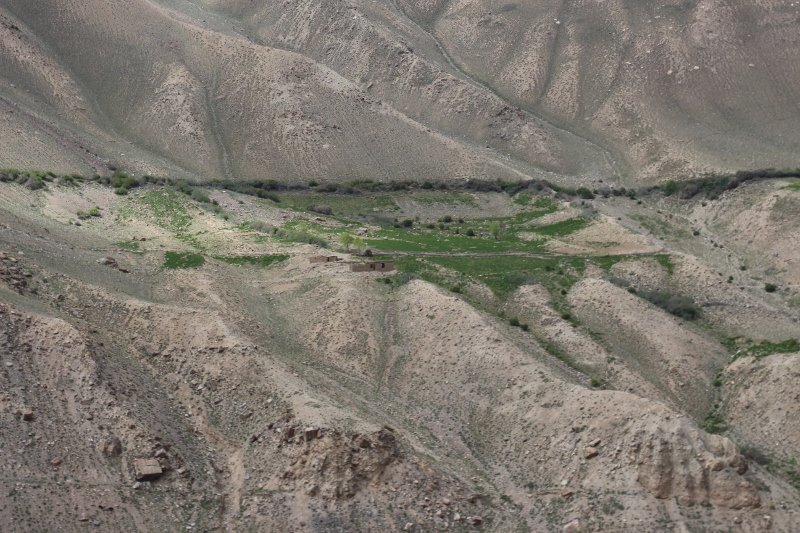 patches of green around the houses, on the dry slopes 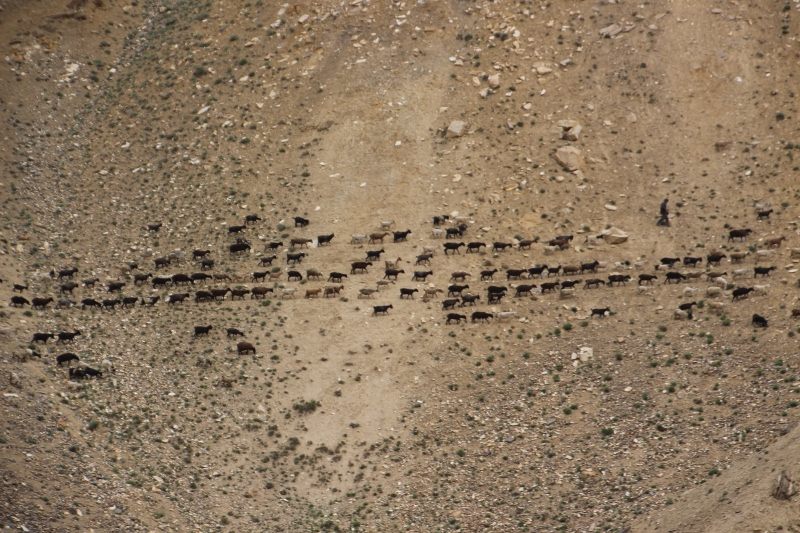 herd of sheep moving along the slopes 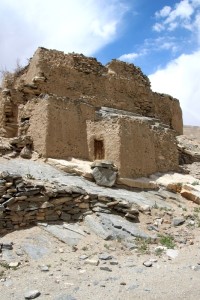 remains of the Shusbuvad fortress dwellings 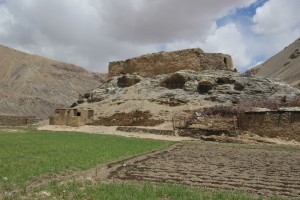 the Shusbuvad fortress on a low hill in the valley 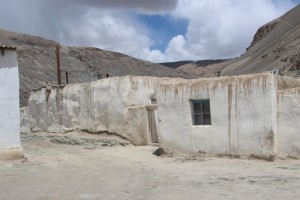 one of the Pamir houses in a village 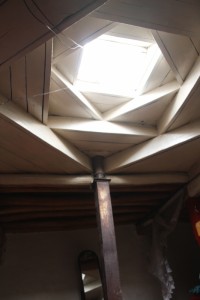 roof window of a Pamir house 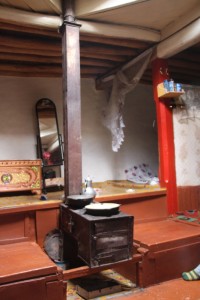 the stove and the kitchen in our lunch place

By now we have driven already for some five hours, going a little slower than expected. We have lunch with a family on the plateau, simple bread with yogurt, in a beautiful, original Pamir house: a couple of rooms, separate kitchen area, and central hole in the roof, now covered with glass, for the light. The man tells us that the pass is at least another hour’s drive, and I start to become a little uncomfortable – not helped by the assessment that we are, apparently, the first car to cross the pass, this year. But once we get to the pass, it is only a short one-and-a-half hours drive back to Khorog, over the Pamir Highway, a much more attractive prospect than backtracking where we came from. 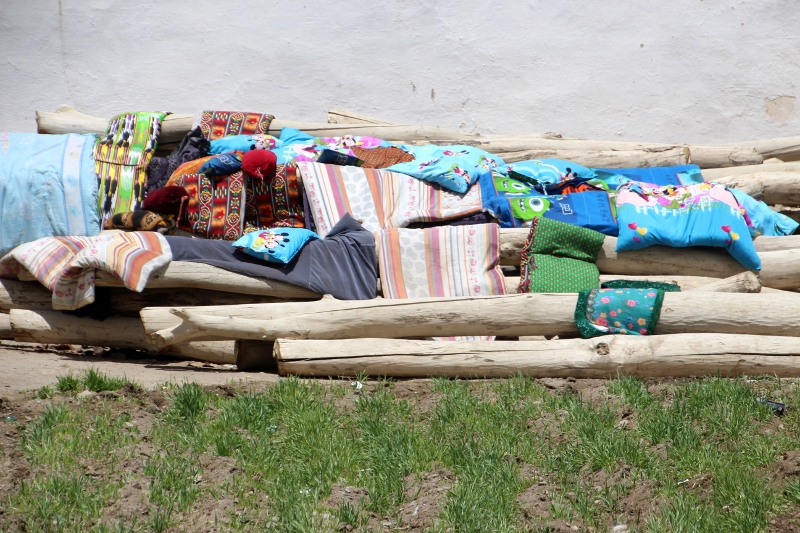 pillows and cushions being aired in the sun

We do reach the pass, but not without leaving the road several times. The pass is, in fact, another, higher plateau, covered with areas of slowly melting snow, and areas where the snow has melted and turned the surface into a water-soaked, soft mud. Finding harder and dryer ground is a time-consuming exercise, requiring frequently getting out of the car, and walking to test the ground. The good news is that we spot other car tracks, too, so maybe somebody had already made it, earlier? We leave the road to follow the tracks, until we find an abandoned vehicle, with camping gear spread around: the people have gone fishing, or hunting, but without any intention to cross the pass, so much is clear. 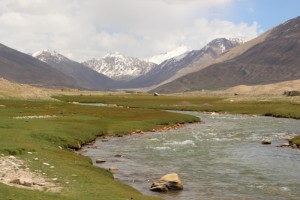 the high reaches of the Shakdara Valley 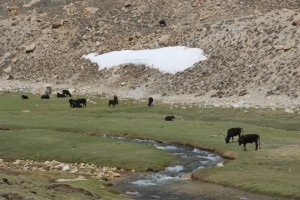 cows near the Maisara Pass 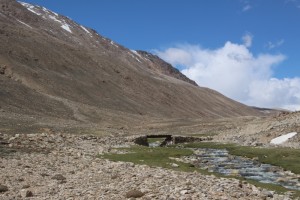 another rickety bridge, high up in the valley 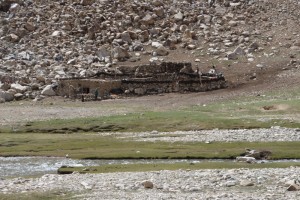 even at this altitude there are plenty dwellings for summer pastures

Long story short, we found the road back, and we continued in the direction of the Pamir Highway. Surrounded by spectacular landscape, let that be clear. The only sign of previous traffic were several motorbike tracks. But after having covered maybe another two, three kilometres in an hour, we decide to give up and turn around – it is getting late, progress is too slow, and there is quite some uncertainty about the road down, on the north side of the pass. It is four o’clock, so with luck, and no stops, we may be back in town by nine. In the meantime, it has started to snow lightly… Now the trick is to carefully following our own tracks again, and avoid once more the tricky spots. Which we manage, despite one near miss – we almost got stuck in the mud, which would have been disastrous, here, without telephone reception.

We got back all right, just before nine. The first thing we heard back in the guesthouse, was the story of two motor bikers, who had tried to cross the same pass the day before, got stuck a little further than where we turned around, and had spent the night on the pass. In a T-shirt. And only thanks to the satellite phone they carried, they managed to get help the following morning.

Glad we did the trip, unforgettable, great experience, and great pictures. But also glad we took the right decision, at the right time. 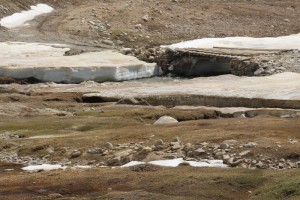 this bridge is supported by ice and snow 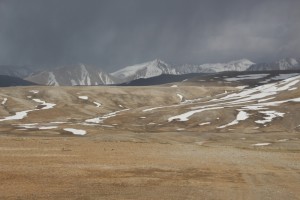 the landscape at the pass, spooky, and utterly desolate 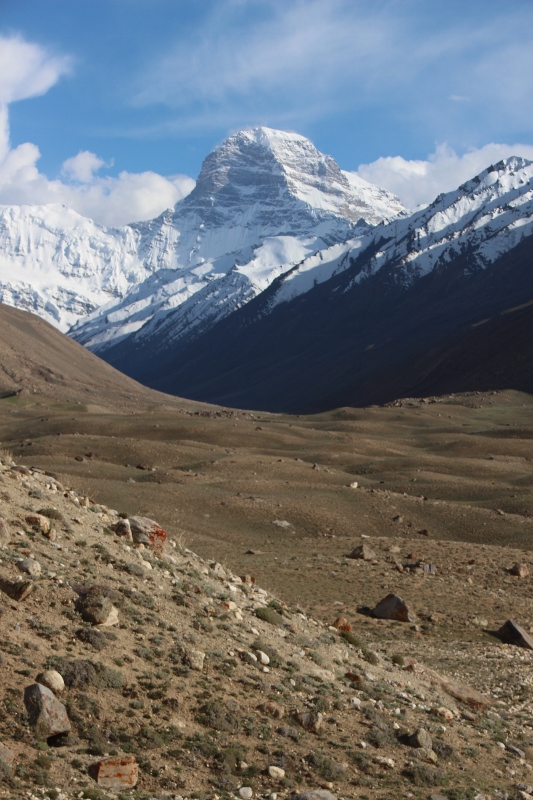 at the end of the day, clouds clear to reveal Peak Engles (6510 m) – Marx remained invisible